Will Coworking Hotdesks Be Replaced by a New Concept?

The Milling Room, a restaurant in the evening and a Spacious location that is turned into a coworking space during the day (Picture: Spacious.com) 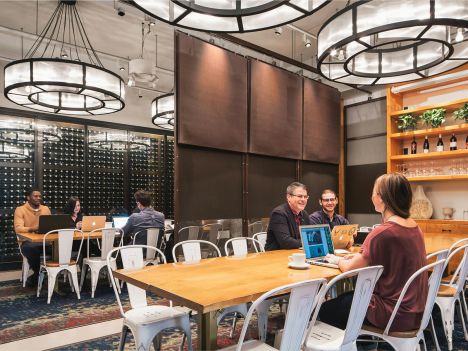 Today, over one million people flock to coworking spaces they once chose as their own. However, a fraction of people forming part of the coworking movement have now rejected the singular space lifestyle in favour of a more flexible model. Indeed, a new wave of coworking has emerged. It’s built upon the hospitality industry and it’s brewing in New York.
By Megan Hanney - Wednesday, 28 June 2017

Businesses forming part of the new coworking wave grant the right for members to work from a variety of high end restaurants, coffee shops and hotels. Those utilizing hospitality spaces target members who typically fit the perfect ‘hotdesk’ profile for commercial workspace providers. This means there are now more choices for the mobile workforce than ever before. The question is, will hospitality coworking models be successful enough to eradicate hotdesk memberships throughout traditional coworking spaces?

Spacious, Work Eat Play and KettleSpace are just a few new wave coworking companies to mention. All three are essentially technology platforms granting access to a variety of workspace venues within a short geographical distance of each other.

Spacious utilizes hospitality spaces during their closed hours with no obligation to reserve a workspace. Work Eat Play repurposes 5 star customer service restaurants during the day, with a ‘no minimum spend’ policy. KettleSpace upgrades restaurants into coworking spaces with added value benefits including member exclusive community events. With monthly memberships ranging from $49 - $95 per month, these companies are strong contenders for effective business model innovation within the coworking industry.

It is also heavily observed by those within the industry that hotdesk memberships have become increasingly difficult to sell over the years and as a result, hotdesk space is being redesigned for different membership types. Global coworking consultancy, OpenWork, concur with this notion. Drew Jones (PhD), Founding Partner at the consultancy, stated “the demand for hotdesks is decreasing rapidly.”

When exploring the reasons why hotdesks are declining, two factors stand out as fuel to the fire. Firstly, there is a large expectation derived from financial models that selling multiple hotdesk memberships per physical desk creates a large revenue stream for coworking businesses. Secondly, many spaces fail to predict the large financial effect of significantly high churn rates of hotdesk memberships.

Jones emphasises that “theoretically, the numbers run wonderfully when financial models are built on the success of selling multiple hotdesks per seat, but in reality this never happens. Private offices provide an income much steadier and more reliable than hotdesks. For this reason, the ratio of private office space to hotdesk space has risen over the years to 85% versus 15%. This ratio is becoming more popular and some spaces now cap hotdesk memberships at an even lower percentage.”