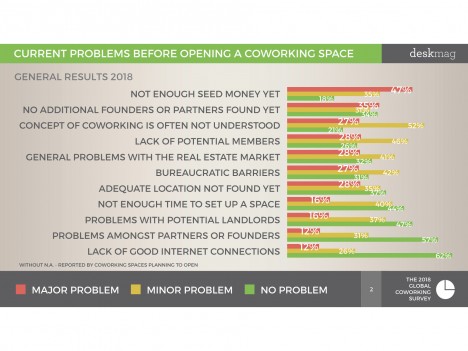 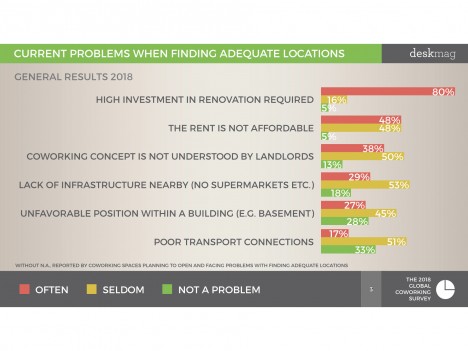 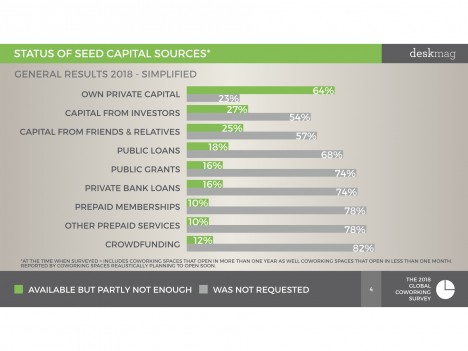 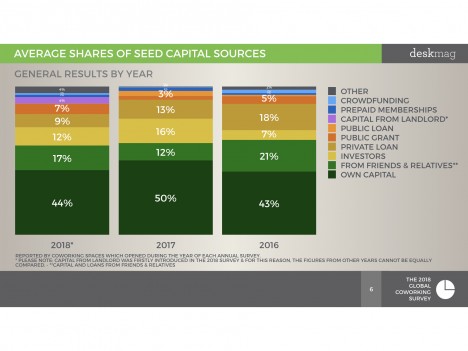 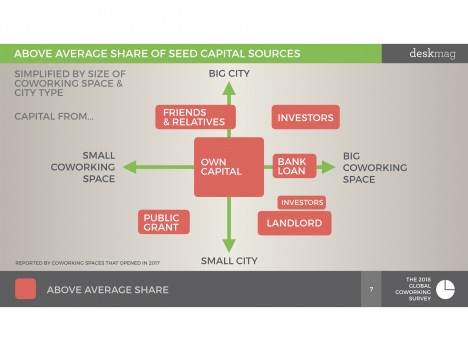 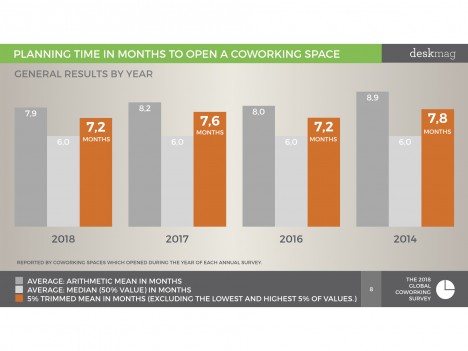 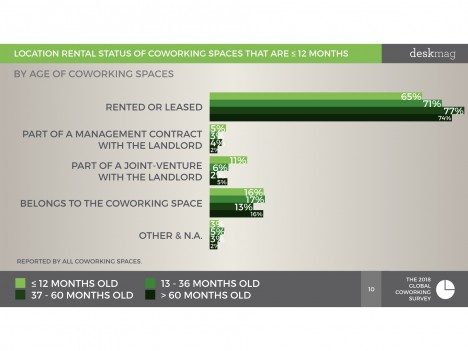 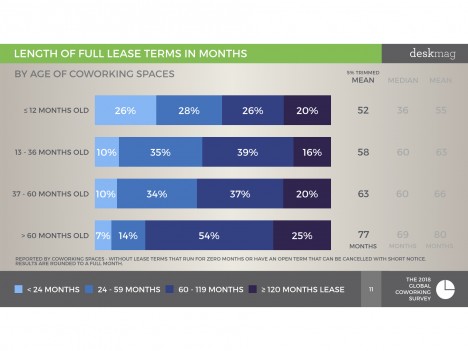 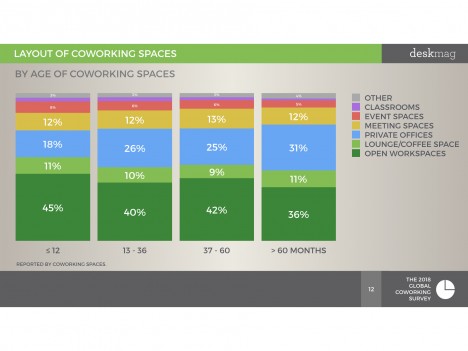 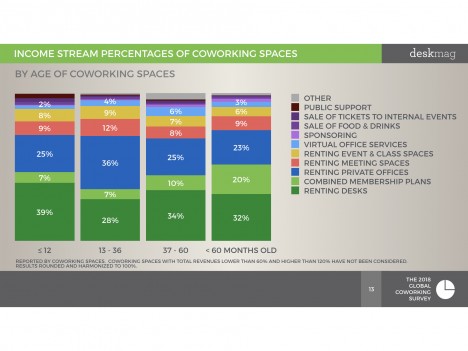 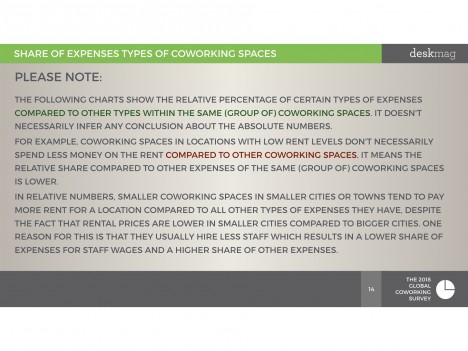 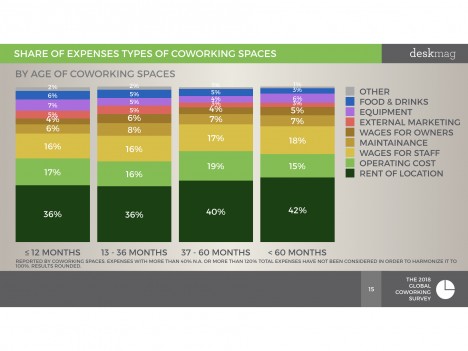 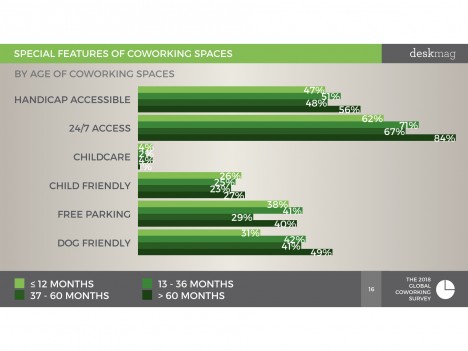 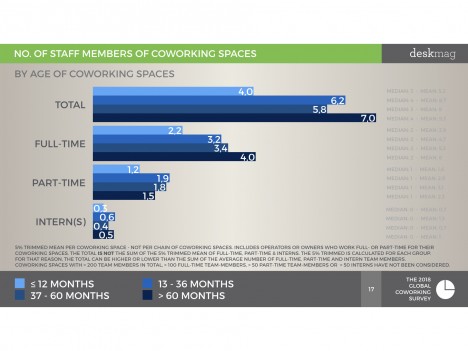 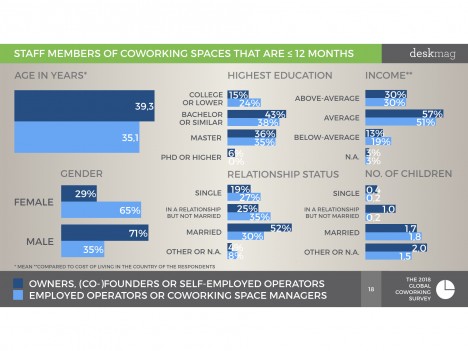 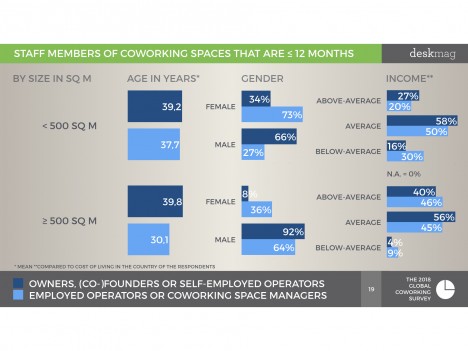 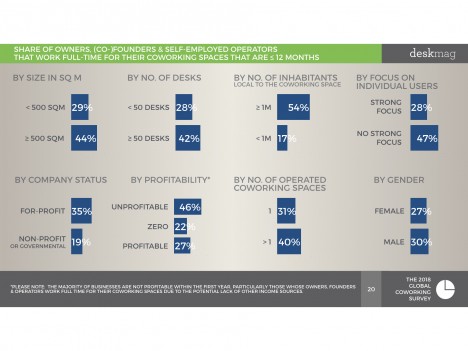 Starting a well-running coworking space usually takes a lot of time and nerves. Without the right motivation, you won’t get anywhere. The same is true for capital. And without knowledge of the market, the business will fail pretty soon after its opening. We can’t help you with the first two factors, but at least we can provide you with knowledge of the market. The results of the 2018 Global Coworking Survey will show you what you can expect during the planning phase and what new coworking spaces look like in the first year after being launched.
By Carsten Foertsch - Friday, 08 June 2018

Finding capital sources and potential partners are some of the most pressing issues that potential founders of coworking spaces report. These decrease as the opening moves closer. In the last 6 months before the opening, the 2nd and 3rd biggest problems are too few potential members and the realization that too many people still don’t understand the coworking concept. However, financial problems remain the number one source of concern throughout.

The independent analysis of the 2018 Global Coworking Survey was supported by Nexudus, Essensys & WUN Systems. Download the free report or get the full slide deck here.

Not every planned new coworking space is actually realized. For this reason, another analysis only took into account those participants of the survey that realistically expect their business to open soon. They have probably already entered partnerships, because the search for additional founders is “only” number four of the most pressing concerns. In addition, fewer of them need additional sources for capital if the opening is still some time away. Nonetheless, it remains the most important problem. Other than that, nothing changes at the top. The question about what they’re actually opening is asked of them as well. And most of them are also looking for more potential members – hardly surprising. No coworking space should expect that new members will simply walk through their doors by themselves.

High rent prices aren’t the main problem when it comes to finding the best location.

In many parts of the world, property prices are only going in one direction right now, and that is upwards. Still, “high rent prices” are only the second biggest problem planned coworking spaces face during the search for the right location. Significantly more are afraid of high renovation costs for their new location – with roughly 80% this number is almost as high as in the previous years. In addition, when talking about problems with the search for a location, every third coworking space reports that potential landlords still don’t understand the business model of a coworking space. Potential members aren’t the only ones who need to be educated.

Founders are still investing a very large portion of their private assets into new coworking spaces.

On average, this is 44% of the overall capital investments – slightly lower than in the previous year. On the other hand, the shares that friends or family contribute increased to an average of 17%. This pretty much balances out the difference. The third and fourth ranks are held by investors and private bank credits with each at around 10%.

There are significant differences in the size of the planned coworking spaces and the locations where they are created. The bigger the coworking spaces, the higher the share of investors – at least in larger cities. In medium-sized cities on the other hand, bank credits are applied for and granted more often. And in smaller cities, the landlords invest a significant share into new coworking spaces themselves. Relatives and friends mainly support smaller coworking spaces, provided they open in a big city. Government funding is basically only granted to smaller coworking spaces in small cities, and even here only rarely. Capital from the founders’ private assets remains the most important financial source in most cases and for all the variants.

New coworking spaces are becoming more expensive – and cheaper at the same time.

In Europe, the average costs are also higher than in the previous year, with € 250,000 per coworking space. However, they are usually smaller than equivalent spaces in the US. The median remained on the level of the previous year with € 35,000.

A new coworking space is opened after seven months

On average, it takes slightly more than seven months from the first concrete planning to the opening of a coworking space – similar to previous surveys. The main differences appear in two dimensions: 1) Smaller coworking spaces are opened significantly faster than big ones. 2) In locations with many coworking spaces, potential new spaces probably benefit from the groundwork of their future competitors. At least they are created more quickly there than in areas with no or only few other coworking spaces.

The sooner a new coworking space advertises new members, the better. Surprisingly, fewer and fewer coworking spaces are using these opportunities. In any case, the share of spaces that start promoting their business 'a few months before the opening' has dropped to 38%. Two years ago it was still 50%.

As smaller coworking spaces profit from shorter construction times, marketing should already be done early in the planning phase, and that’s probably why most of them don’t use it as much. In smaller cities, where new members are especially rare and where coworking spaces need longer planning times, more than a third are only promoting their coworking spaces after they are opened. An avoidable mistake that makes the already difficult conditions even harder. Even if smaller rooms can be filled more quickly due to the limited available space.