Coworking in the US and the EU 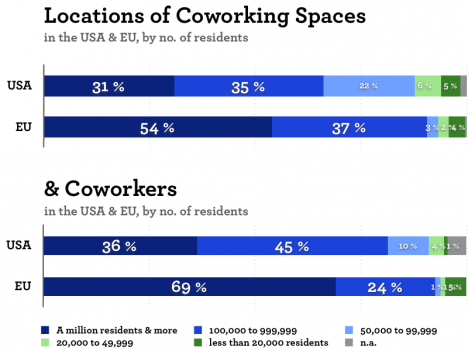 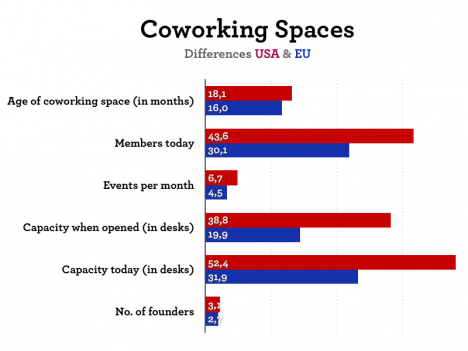 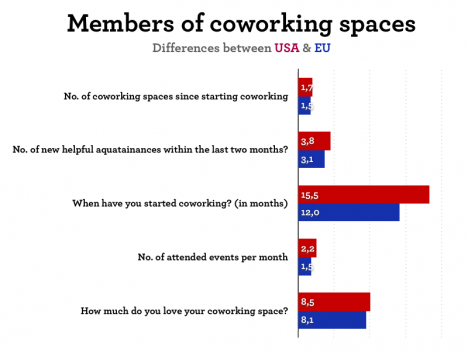 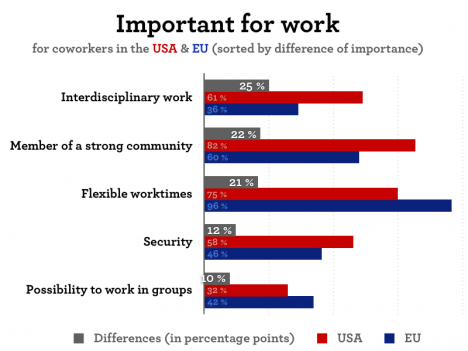 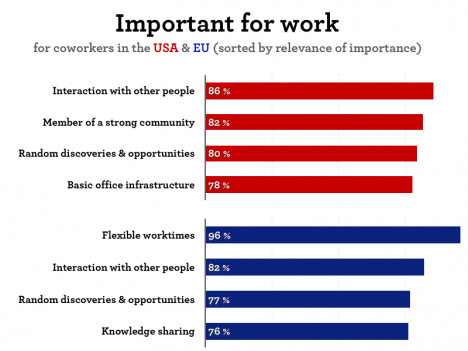 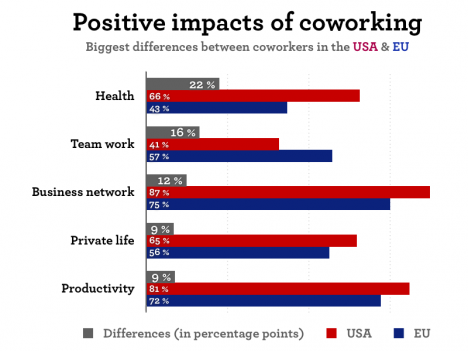 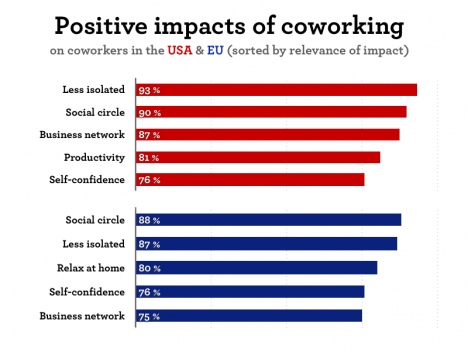 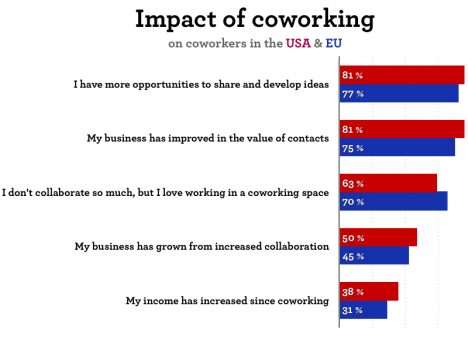 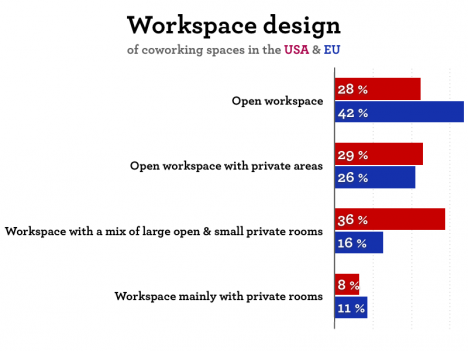 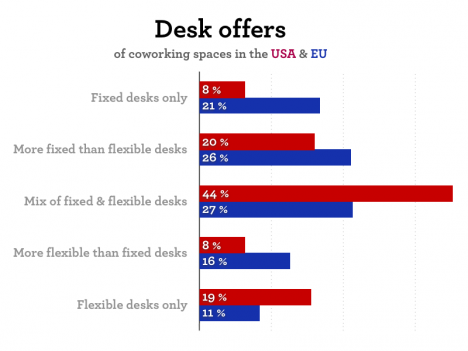 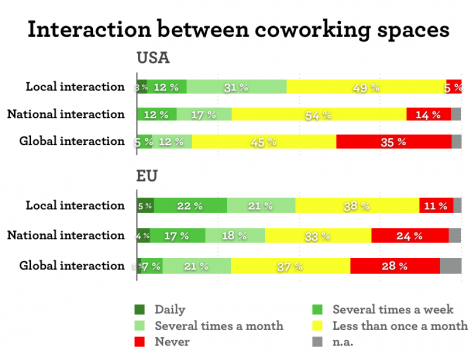 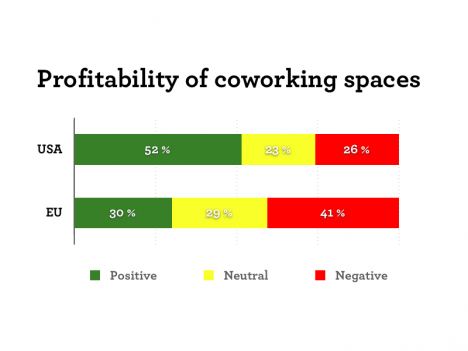 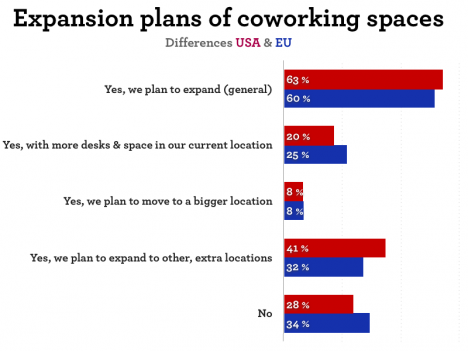 The development of coworking communities depends not only on the spaces themselves, but also on the space around them. In the Global Coworking Survey, we contrasted the development of the movement in the two largest coworking regions. More space - in terms of area - is favorable for coworking spaces in the US. European coworking spaces tend to have more intense connections with one another, since physical connectivity comes easier in more densely populated regions that are closer together. The survey also shows that working in a coworking space is better for your health - especially in the U.S.
By Carsten Foertsch - Thursday, 19 July 2012

If a new coworking space opens in the US, then there are, right from the start, twice as many places available to seat members than in the EU. The reason for this is geographical: the vast expanse of land that is the United States means more space to occupy on average, and consequently lower rent for larger areas, compared to the EU.

While the majority of European coworking spaces are found in (more expensive) densely populated metropolises (54%), in the US these only represent around one-third. Conversely, two third of US coworking spaces are located in cities with less than a million residents, suburban areas in particular, and also rural areas. Even more extreme is the difference between coworkers: 70% of all European coworkers are found in big cities, while in the US there are only half as many.

More space does not necessarily mean more members, but simply suggests that there is more possibility for this to be the case. In the US, this holds true, and there is a direct correlation. American coworking spaces have an average of 44 members, while in Europe, the average is around 30.

European coworking spaces operate often at full capacity, but US counterparts are more profitable on average

The European spaces operate more often at full capacity, and therefore - absurdly - are slower to break-even financially. In the United States every second coworking space operates within recurrent net income; in the EU only 30% do so, even though the average age does not differ much (18 to 16 months). Compared to normal start-ups, however, all spaces are refinance relatively quickly.

As explained above, limited space translates to a lower level of profitability. That's why European spaces are expanding at almost the same rate as their more profitable U.S. counterparts. Nearly two-thirds of coworking spaces will (or have) expand(ed) this year on each side of the Atlantic. In the EU, this occurs more frequently within the workspace’s immediate vicinity, including extra space next door to the existing workplace. In the US, expansion plans often take the form of an additional further-away location.

The different spatial potential also affects the design of a workspace. More room allows for more diversity, or distinction between, work areas. Thus in the US, coworking facilities tend to offer more often a combination of large open work areas and small private offices, as well as more flexible desks. Coworking spaces in the EU, however, are more often characterized by large, open work spaces with fixed desks for (permanent) members.

Bigger and more flexible spaces also allow more events to take place. On average, an US-American coworking space hosts an average of 7 events per month, compared to 5 in Europe.

A larger landscape also affects the interaction between coworking spaces. In Europe, spaces share local, national and international ties either on a more intense level, or not at all.

In the U.S., the connections are more sporadic. Within the country, more connections can be counted, but they are looser and not as intense as in Europe. International connections are less frequent than in the EU, but this is simply put down to the size of the United States, whose geographical area exceeds that of the 27 countries of the EU combined.

A coworking space isn’t a coworking space without members. In a place where people live closer together, are less segregated, and where there exists (to a degree) more comprehensive national social systems, there is less need - or desire - for community; or rather, a softer version of it, like in many countries of the EU. In contrast, belonging to a strong community is one of the most important factors for coworkers in the US.

On the other hand, Europeans especially love flexible working hours (96%!). Interactions with other coworkers is in second place, and consider them almost as important as US coworkers (first place). The biggest difference between EU and US coworkers lies in the need for interdisciplinary work, with the latter finding it more important.

And what have coworking spaces given to their members? Both in the EU and the US, almost all coworkers feel less isolated, have expanded their social networks and increased their productivity and self-confidence on almost the same level.

Coworking improves health - especially in the US

Coworkers in the US, however, often report an improved state of general health than the Europeans since starting coworking (66%!). One possible explanation could be that Europeans rely on a better basic social and health system which depends less on where one works, and what one does. But members in the EU also reported a strong increase in their general health.

Because coworking spaces, over other work spaces in the United States, offer more benefits and opportunities, they are rated slightly higher than in the EU (8.5 to 8.1 out of 10 possible points). Nonetheless, the coworking movement is a great success on both sides of the Atlantic - for spaces and their members.

12) From home office to coworking space