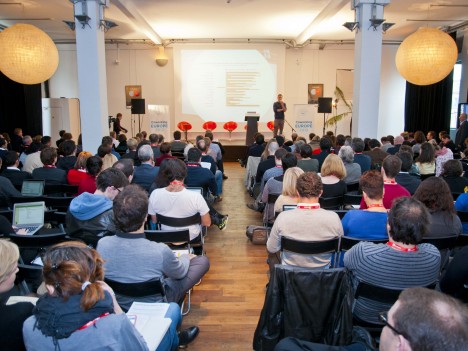 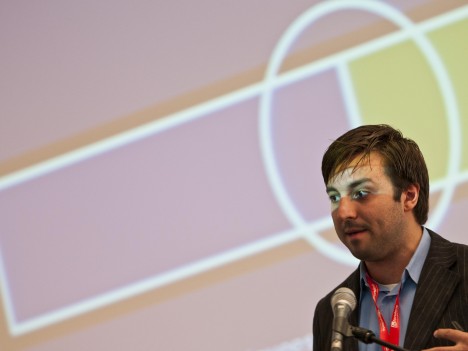 The Bellevilloise in Paris' east buzzed with activity yesterday as 280 attendees came together for the third annual Coworking Europe Conference. Participants came from as far as the US and Australia, with over 30 nationalities represented. The programme on day one featured keynotes from a range of industries, and invited audience participation in the afternoon during panel discussions.
By Anna Cashman - Friday, 09 November 2012

The day kicked off with the preliminary results of the third Global Coworking Survey. The survey showed that coworking space numbers have continued to rise steadily. Coworkers continue to report positive impacts on their work and lifestyle, identifying significant rises in both soft and hard collaboration. This year the survey called on coworkers to describe their coworking spaces. 'Fun' was the adjective used most frequently to describe their spaces; and set the tone for the rest of the day.

The most inspiring presentation of the day was by Tony Bacigalupo from New Work City. He made a rousing call for coworking spaces to come up with ways to 'fix the job crisis ourselves'.

He identified a correlation between the rise in the New York startup scene and coworking, which both surfaced in 2006, operating in a symbiotic relationship to make the city the biggest coworking hub worldwide. This realisation presents the industry with an opportunity to redefine the role of coworking spaces as nodes of cross-sectional connectivity and support.

As an example, he used the recent experience of the disaster brought upon the US east coast by Hurricane Sandy. In the wake of the hurricane, many coworking spaces responded by setting up support services and opening their locations to those in need.

This, he said, proved the flexibility and opportunity of coworking spaces to facilitate the transition between full-time employees, freelancers, and entrepreneurs, and to prop up important players in the ruined economy. He challenged the audience to join him in talking about coworking spaces to this end, and, as the industry moved from a niche to a global phenomenon, as physical instruments to fix the job crisis.

More than at previous European coworking conferences, there were many participants representing the corporate sphere and industry stakeholders. Jennifer Magnoli, a consultant for the online retailer Zappos, shared the company's vision to redesign downtown Las Vegas, and how coworking spaces were used as hubs to inject innovation and vitality to what was a 'desert town'.

Jasper Muller from the Dutch hotel chain CitizenM shared the hotel industry’s take on coworking, and showed how other sectors are interested in the movement.

There was heavy content for coworking space owners on how to build and design a coworking space. Oliver Marlow from Tilt architectural studio in London shared their views on design, describing the evolution of the modern coworking space in an historical context. Guzmán de Yarza Blanche from School of Architecture and Design in Madrid added to the discussion with an update on current design concepts.