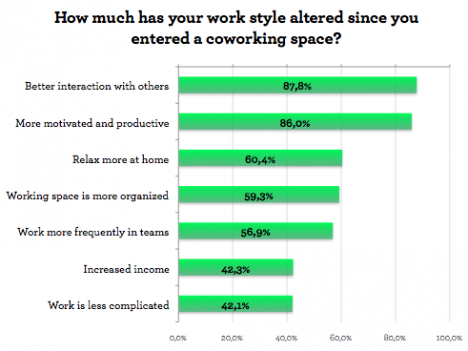 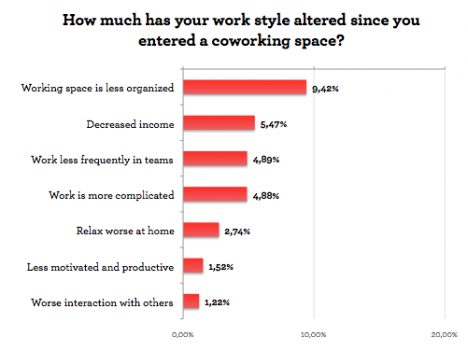 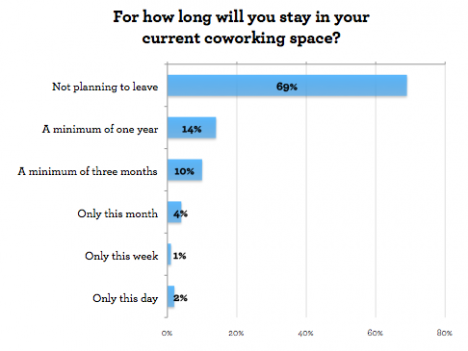 The first global coworking survey is now complete. A total of 661 people from 24 countries took part in the survey. Deskmag and our partner organizations would like to thank all participants. The evaluation of the data requires a little time, but a few preliminary results are already available.
By Carsten Foertsch - Wednesday, 29 December 2010

The positive results stem from the real advantages offered by coworking spaces. Most respondents said they are more motivated (85%) and have better interaction with other people (88%) since they moved into a coworking space. Almost half now work in teams more often (57%).

More than half organize their working day better so they can relax more at home (both 60%). At least 42% of all coworkers also report earning a higher income since joining a coworking space, and only 5% suffer from a loss of income.

The price of coworking is satisfactory for most participants. Fifty-four percent said the price was exactly right, and about a quarter think it was a little high but still fair (21%). One in five respondents would be willing to pay a little more, while only 6% said it was too expensive.

As a result of their satisfaction, most coworkers plan to stay where they are for 2011. Almost 70% have no intentions to change coworking spaces, 14% will stay at least another year, and just under one in ten will remain for three months more. Only 7% of coworkers plan to leave their location in the near future.