Do business cards have a place in a coworking space?

Business cards have a place in many coworking spaces. Seen at Creative Density in Denver... 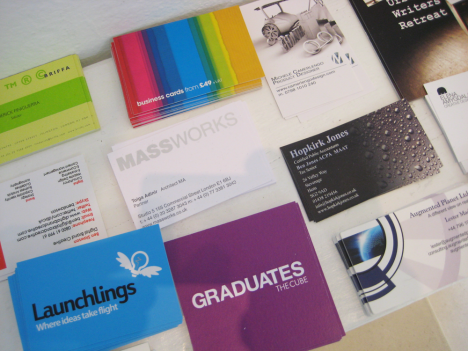 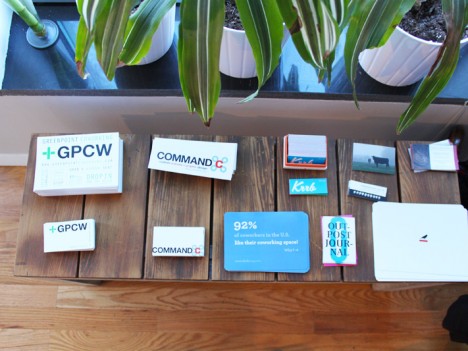 One of the advantages often touted for coworking spaces is the opportunity to network, particularly if you’re a freelancer or otherwise working on your own. But the shape that networking can take isn’t quite the same in a coworking space during working hours as at an event held specifically with the intention of encouraging people to network.
By Thursday Bram - Monday, 26 November 2012

You can see this in the mindset of how people settle down to work at a coworking space. I regularly travel, using coworking spaces as a way to get an office to work from, as well as a chance to meet locals. I tend to chat with the people working around me, getting a feel for what they do and if there’s any connection I need to make a little more formally. If I come across someone I want to stay in touch with after I move on to the next state and the next coworking space, I’ll pull out my business card and offer to swap.

But in several spaces I’ve visited in the past few years, no one will have a business card on them. “Oh, I left them at home. I’m just here to work,” is a common response. In one coworking space, I got the distinct impression that bringing business cards in and networking when people were hard at work was a faux pas.

Does Networking Belong in Coworking Spaces?

There are many coworking spaces that firmly encourage networking, to the point of offering events and tools to facilitate introductions. At the Div, in Oklahoma City, for instance, there’s a board posted on the wall where it can catch your eye when you walk in. Anyone can post their contact information and specific requests on the board. There are requests for freelancers, introductions, even tutorials on different topics.

This sort of approach requires balance, though: if you don’t monitor such boards or even the in-person interactions taking place in a space, there are some people who will go a little overboard with their networking. It may very well be a tragedy of the commons, but I’ve seen a similar problem on several boards like the Div offers. Someone will set an entire stack of his business cards out for people to take, sometimes even taking a thumbtack and posting a few on the board. If there’s no explanation, no specific reason to contact such a person, it’s understandable that the members of a shared space would feel like that stack of business cards has no place in a coworking space.

The Values of an Individual Space

Every coworking space is different. Each one has different characteristics that members value. For some people, a coworking space is the only opportunity that they have to get out of the house and meet other creatives working on interesting projects. For others, the coworking space is a bastion of peace and quiet where it’s actually possible to work, unlike a home office. We tend to gravitate to the spaces with the characteristics we so desperately require. It’s only when we try new spaces that we find that different spaces have different cultures when it comes to dealing with questions like how much networking is appropriate.

That means that each coworking space has an obligation to make it clear to both visitors and new members how the space-specific culture works. Hacker Dojo, based in Mountain View, California, offers visitors a guided tour to the space, with useful tips like which areas are where people hang out and talk and which are more conducive to putting your head down and working hard.

Should Networking Be a Major Function of a Coworking Space?

No matter how much information you can give a new member about the way a specific coworking space sees something like networking, there’s still an underlying question of whether networking opportunities are something that we should look to coworking spaces to provide.

I have a personal preference for being able to — even encouraged to — network at coworking spaces. But I’m also the consummate networker; last week, I pulled out my business card after a funeral. The logic seems obvious for being able to network in a place where you’ve got examples of what you’re working on and that facilitates you talking about the great things you want to accomplish.

It’s possible to see the other side of the discussion, though: the specific service that members pay for is having a place to work. Meeting new people and talking can make it a lot harder to work. There are social cues (like wearing headphones) that can help get the message across that someone doesn’t want to network, but for someone who needs to make a big deadline, even other people’s chitter-chatter can be a problem.

There’s no universally correct answer: each space has different needs and expectations when it comes to networking. I’m hoping that we won’t see any bans on even bringing in business cards. If someone tells me that networking isn’t encouraged in a particular location, though — I just need to know what they are.