The different strengths of small and big coworking spaces 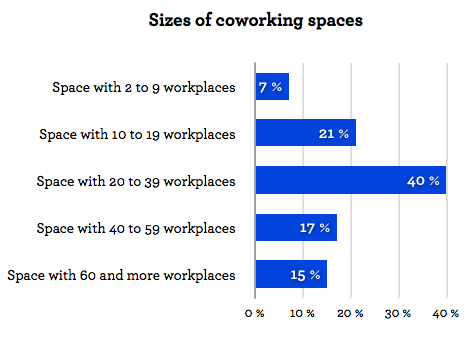 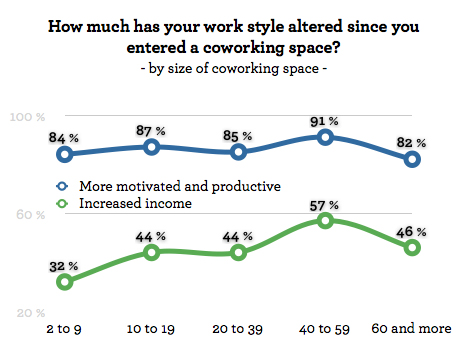 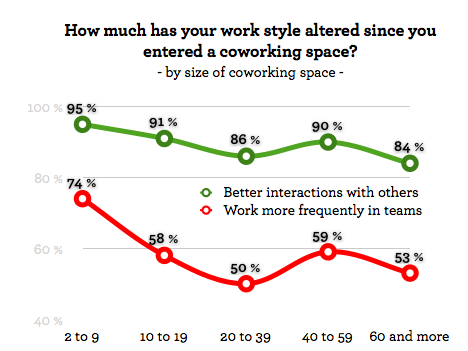 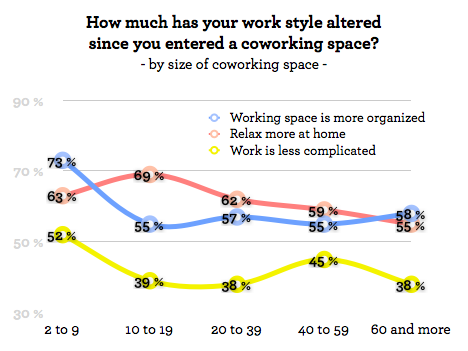 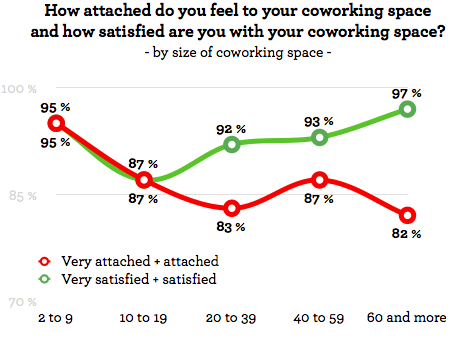 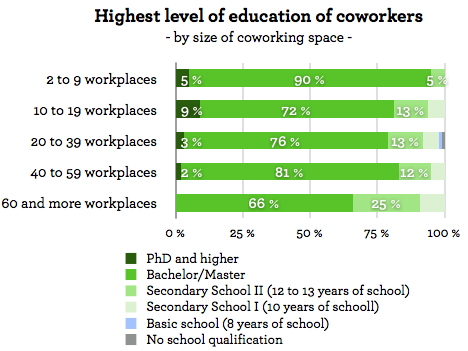 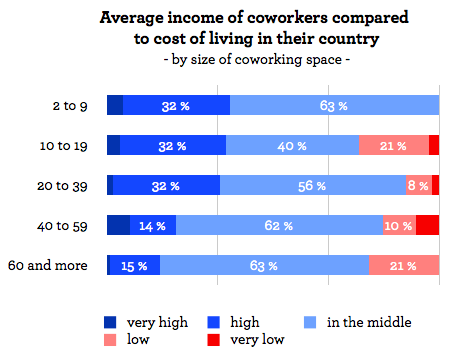 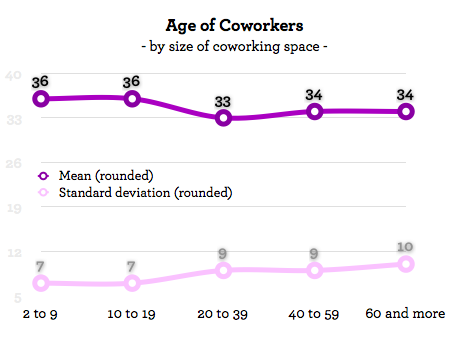 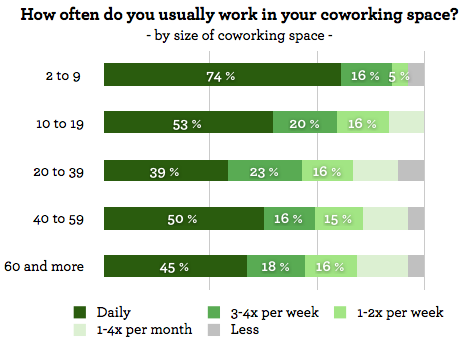 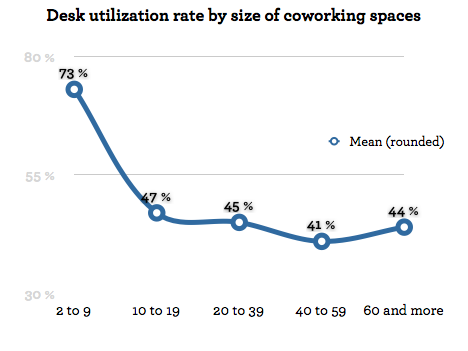 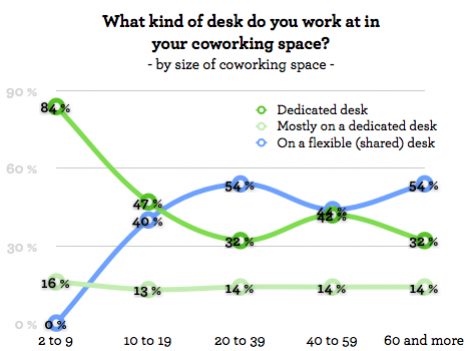 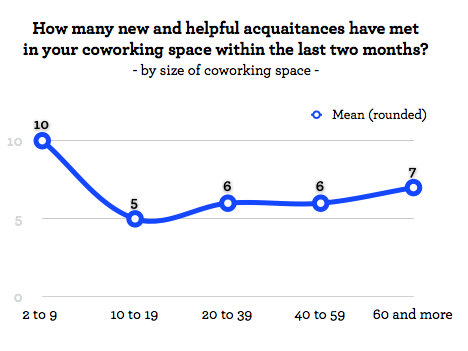 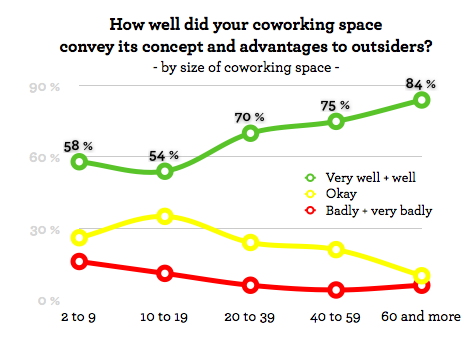 Coworkers prefer smaller coworking spaces. But not everything that people want is necessarily good for them - think of your mountain of Easter eggs left over from last weekend. While small spaces are more comfortable, larger ones provide a wider network of opportunities. To evaluate the benefits and drawbacks, we have combined new results of our Global Coworking Survey with some concepts from Mark Granovetter, an eminent network theorist.
By Carsten Foertsch - Tuesday, 26 April 2011

The Global Coworking Survey shows the differences between the users of small and large workspaces. The opportunity to make new connections with other people is highest when a coworking space is tiny or huge, but falls slightly in between.

Respondents to the survey were asked how many helpful connections they had made since joining a coworking space. Those in spaces with less than 10 desks reported making ten connections. This fell sharply to 5 connections for spaces with 10 to 19 desks, then increased slowly back to 7 connections in spaces with 60 or more desks - since there are just more coworkers to know.

The propensity to work in teams or enjoy better interactions with other people decreases as the size of the space increases. Respondents were asked how their work style had altered since joining. 95% of coworkers in small workspaces report better interactions with others, compared to 84% in larger spaces (still a high figure). A more dramatic drop was noted when respondents were asked if they work more often in teams; 74% in small spaces said yes, compared to 53% in large spaces.

Users of smaller spaces are more likely to have better organized workspaces, find it easier to relax at home, and think their working life is less complicated than those at bigger spaces. Only on the question of relaxing at home do workers in medium-sized spaces report better results than those in small spaces.

So far we’ve looked at the social elements. But when considering economic effects, smaller spaces begin to loose their advantages. Users of larger spaces – those with between 40 and 59 seats – are more likely to report that they have earned higher incomes and are more productive since becoming a coworker. Even medium-sized and extra-large coworking space users return better results on the question of income and productivity than those from small spaces.

These results may indicate that while coworkers in smaller spaces have stronger ties to one another, those in larger spaces have a wider network to which they are loosely connected.

It also fits with the theories of sociologist Mark Granovetter, who in his book “The Strength of Weak Ties” examined the different benefits of strong and loose connections between individuals. Connections range from acquaintances, which according to Granovetter are weak ties, to intimate and long-lasting relationships, which he ranks as strong ties.

Strong connections mean individuals spend more time together, have greater intimacy between each other, trust each other more, share same values (they just have more in common) and exchange more often. This is similar to the theories of social capital advanced by Pierre Bourdieu, James Coleman and Robert D. Putnam. Strong ties mean individuals have a higher quality and quantity of interaction, and enjoy many mutually beneficial exchanges.

The Global Coworking Survey didn’t ask about the quality of relationships between coworkers, but it did deliver some telling data with regards to quantitiy - how much time people spend together in one workspace, and the number of people the coworker can turn to for support.

Coworkers in small spaces spend significantly more time together. About 75% of them work daily, and 85% of them occupy permanent desks. This contrasts markedly with larger spaces, which are more likely to have flexible desk users who drop in less often. Small space users are also much more likely to be attached to their space. Therefore, it can be construed that coworkers in small spaces have stronger ties to each other.

The results also show that coworkers in small spaces are more often of a common age, are more likely to have a similar level of education, and earn a similar income. These similarities between each other strengthen their internal ties.

Yet while their internal ties are strong, their connections to others may not be. Workers in large coworking spaces meet more people daily, especially as there are more flexible desks in their worskspaces, and though their interaction might be less meaningful it can still allow for new work opportunities. They also have a more diverse community to draw from when they are in need of specialized assistance.

This exemplifies Granovetter’s theory of the strength of weak ties. Individuals who spend less time together, yet share the same values, provide better access to new information because they are more likely to move in other social circles. They can also help find new projects, as Granovetter explained in another of his books “Getting a Job.”

So while a small coworking space might provide greater comforts, a larger space provides more opportunities. We can’t recommend a perfect size, however a good space should provide its users with a core set of values, and provide connections to a wider network of individuals, even if they don’t work daily alongside each other. A good coworking community is based on both strong and weak ties.