The 2018 State of Coworking Spaces

A location of Union Cowork in San Diego. Click here for more stats. 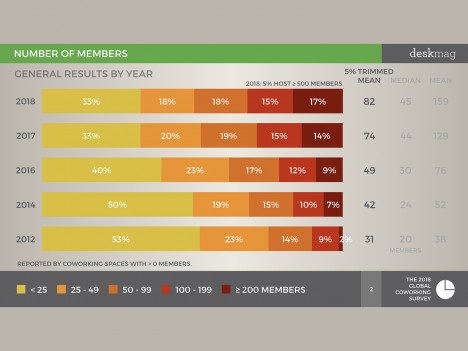 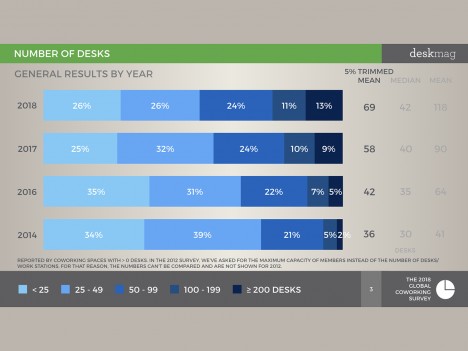 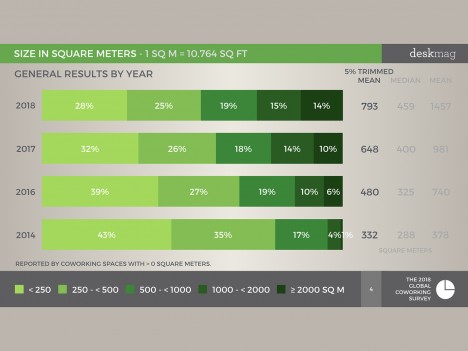 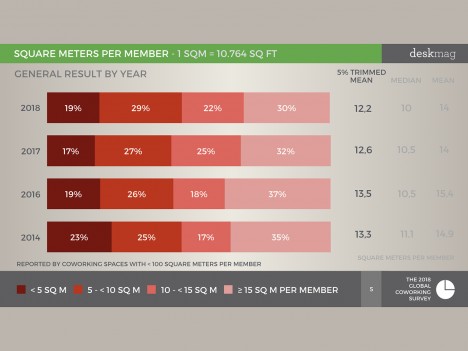 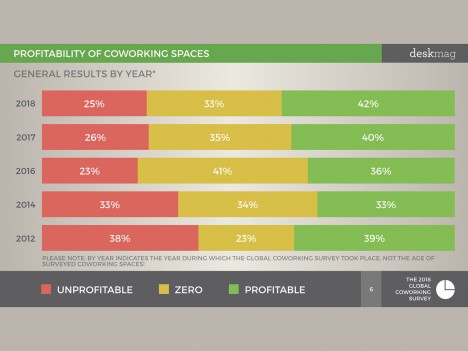 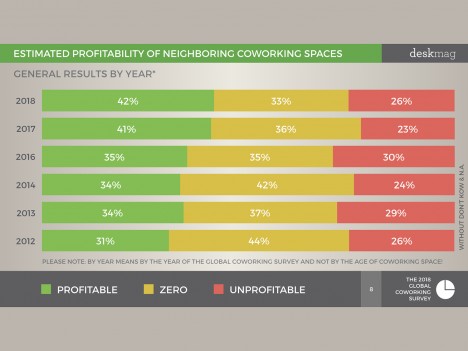 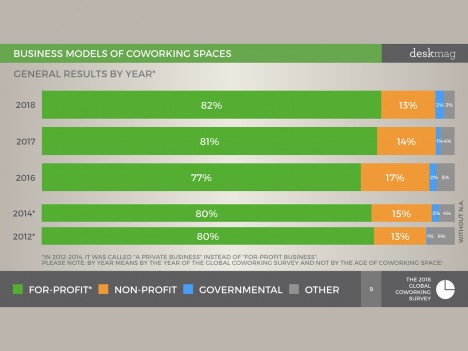 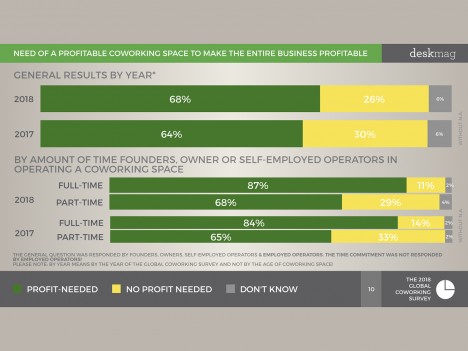 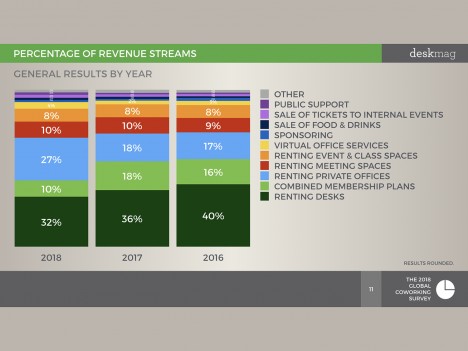 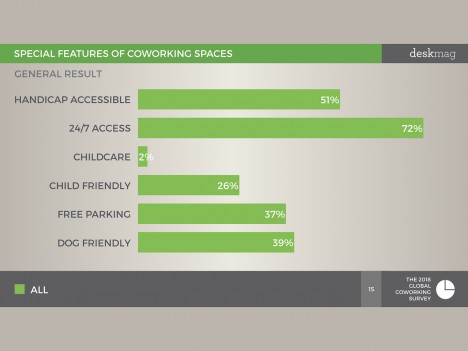 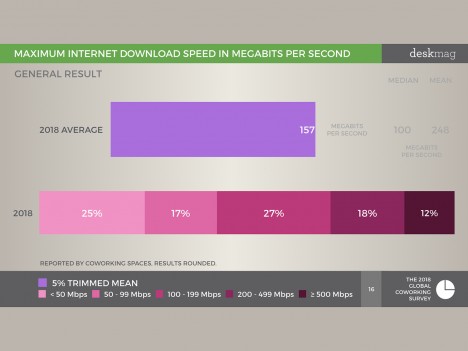 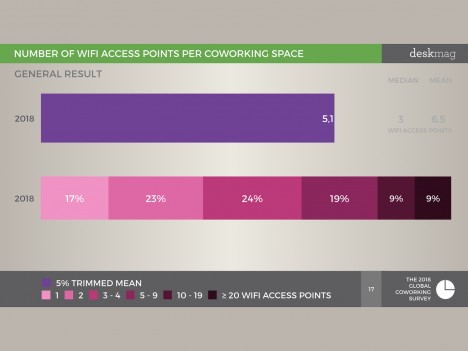 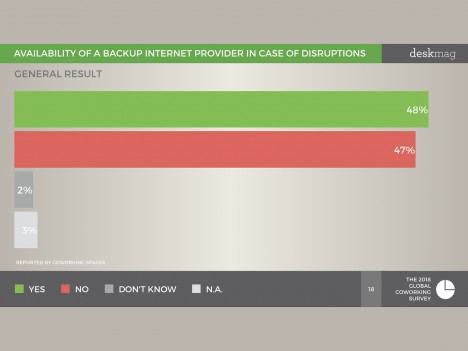 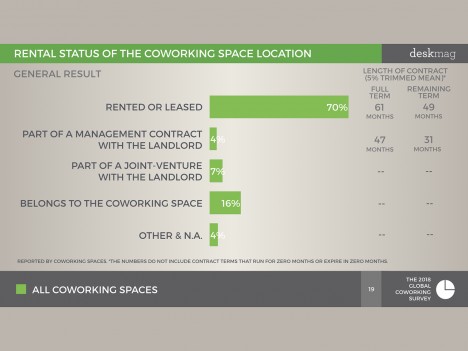 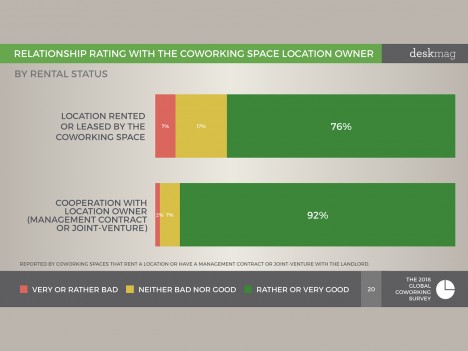 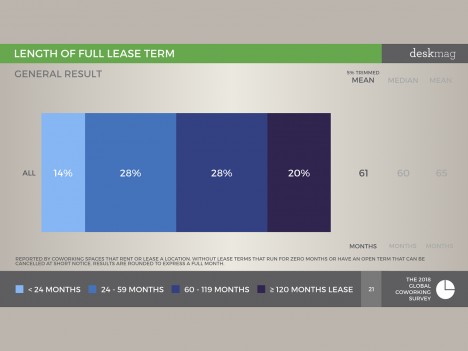 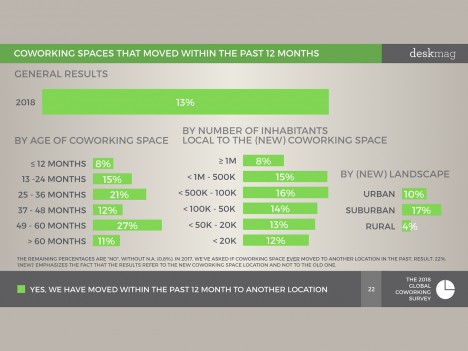 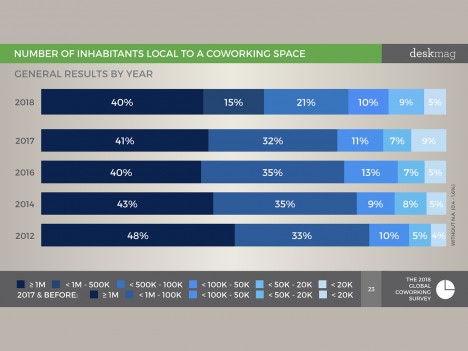 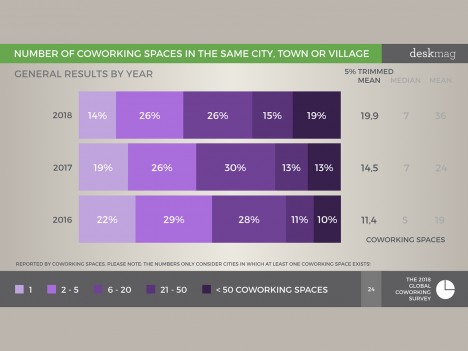 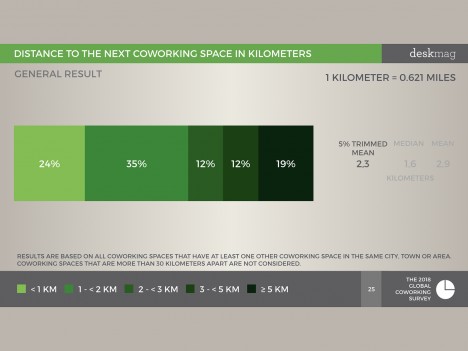 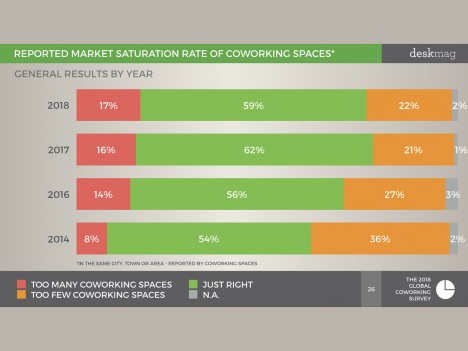 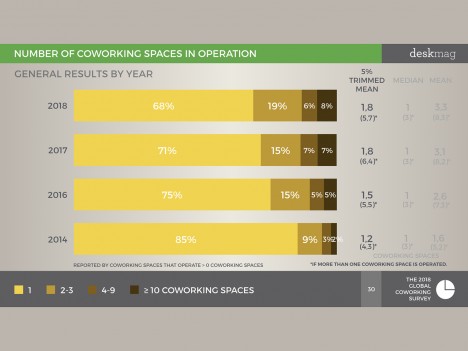 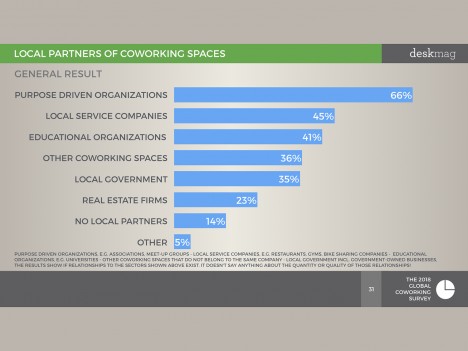 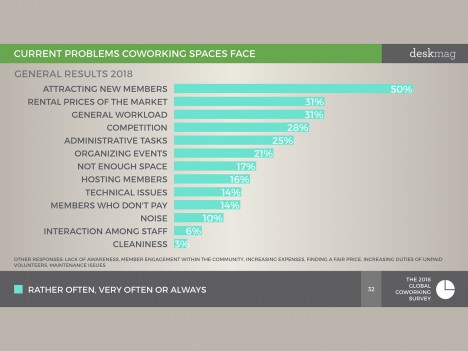 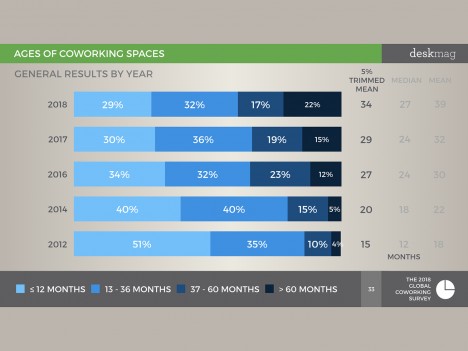 Coworking spaces are growing. Each year they offer larger workspaces and serve more members than the year before. These findings are not new. But what does a detailed view of coworking spaces look like presently? In this article, you will learn not only about membership numbers, but also how they divide their expenditure and revenue, how many locations they operate, where they are located, or what internet speeds they offer. We are publishing many findings for the first time, together with the most extensive data report to date about coworking spaces.
By Carsten Foertsch - Tuesday, 11 September 2018

A typical coworking space has on average* around 80 members, working at 70 desks spread over an area of around 800 square meters (8,500 ft²). Compared to the previous year, the space and number of desks have increased by over 20% - significantly more than the number of members (+10%). Taking all extreme values into consideration, a coworking space now roughly provides 120 desks and 1,500 m² (16,000 ft²) for 160 members.

The independent analysis of the 2018 Global Coworking Survey was supported by Essensys, Nexudus & WUN Systems. Download the free report here. Get the full report and the associated 450 slides here.

Utilization has increased to 1.2 members per desk

The average occupancy has increased slightly to 1.2 members per desk. For these figures, we evaluated the relationship within each individual coworking space before calculating the average. There are now 12 square meters (130 ft²) available per member, a little less than the previous year. The area per desk has increased marginally to 11 square meters (120 ft²).

Surprisingly, the continuing rise in the share of private offices within coworking spaces (25%, +6pp) supports this trend. The number of members per desk increases if private offices take up more space. In these offices, desks don’t seem to be used by only one particular member, but rather flexibly by several people.

The relative share of dedicated meeting and event spaces has decreased compared to the previous year whilst open workspaces continue to account for half the space of an average coworking space, if you include the coffee and lounge areas. However, the bigger the coworking space, the more likely open workspaces are also replaced by private offices. They are not necessarily getting smaller, but their share of space is declining compared to the remaining spaces.

This doesn’t just depend on the layout. An open workspace without people wouldn’t make coworking possible either. Private areas can temporarily make work easier, which is why the vast majority of coworking spaces offer more than just open workspaces. What is more, communication and coworking doesn’t only take place within workspaces or in direct conversations. It also happens over smartphones and computers, or outside the office. However, frequent face-to-face encounters promote social interaction considerably. They especially make it easier to get to know others. Every tenth coworking space is now made up 60% or more of private offices. Their walls can hinder a collaborative atmosphere and therefore threaten the conditions that encourage coworking and new encounters.

Revenue from private offices is rising faster than their space increase

Private offices now generate on average more than a quarter of the total revenue (27%, +9pp). Their revenue has thereby increased faster than their floor space. In contrast, the simple rental of desks has dropped (32%, -4pp), as have membership packages that include multiple services at the same time (10%, -8pp).

Rent continues to be the biggest expense for coworking spaces, accounting for just under 40% of their spending. Its share fell slightly compared to the previous year, presumably because management contracts and joint ventures with landlords are becoming more popular, especially among new coworking spaces. However, the 70% of coworking spaces who rent their premises spend 45% of their total expenditure on rent.

▶ Next page: How profitable are coworking spaces & how saturated is the market?