The average cost of coworking: two cups of coffee a day

Renting a flexible desk in a coworking space is as cheap as buying a few cups of coffee a day at a cafe. The average monthly price is $195 in the US, €189 in Europe, and £168 in England. Best of all, most coworking spaces provide free coffee. 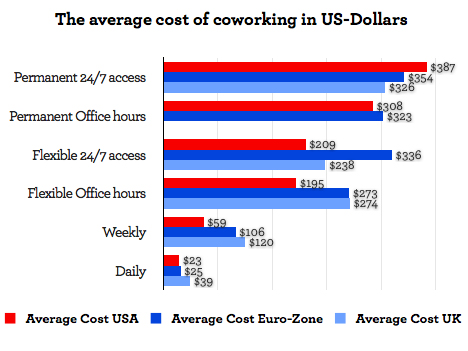 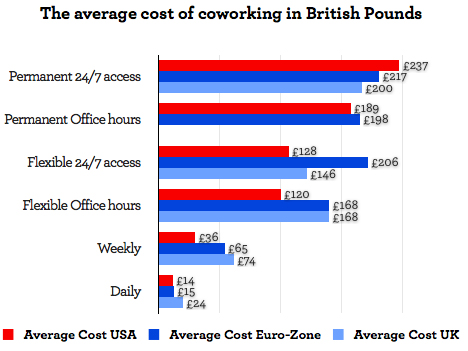 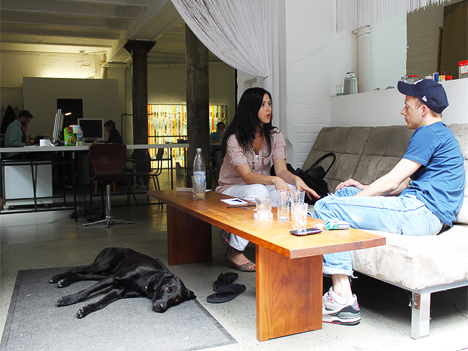 The cost of renting a desk in a coworking space has remained stable over the past six months, with only a slight increase in the price of permanent desks. As the number of coworking spaces boom, it seems most new locations are retaining the price models of existing spaces, keeping costs steady. For coworkers, entry prices are still very affordable: the average monthly cost of a flexible desk is just $195 in the United States, €189 in Europe and £168 in the United Kingdom. It’s the same amount you would spend on two or three drinks at a coffee shop if you went in every day. And most coworking spaces provide free coffee, so it’s a double advantage.
By Sophie Bonnet - Tuesday, 14 June 2011

A guest article by Sophie Bonnet, analyst at Deskwanted.com:

Deskwanted, the coworking portal, has conducted our half-yearly analysis of coworking prices to discover the average cost of renting a desk. We compared the prices of nearly every active coworking space in the three main coworking regions to find the data.

Some coworking spaces offer unique price plans, with specific access times, days per month and added costs. We kept these prices out of our study to avoid skewing the data. Instead, we focused on the four most common price categories found in coworking spaces around the world:

Additionally, many spaces have weekly and daily tickets, for which we found average prices.

The most common price category at all spaces worldwide is the permanent desk with 24/7 access. It seems coworkers like having a fixed place to work, whenever they please. This was also reflected in the Global Coworker Survey, which showed about 55% of coworkers are permanent desk users. Our latest analysis shows they pay an average of $387 a month in the US, €245 in the Eurozone, and £200 in England. With current exchange rates factored in, the UK appears to be the cheapest place for permanent coworking right now.

The second most common price category is that of a flexible desk during business hours. For this option, which involves packing up your things at the end of each day, coworkers pay a monthly average of $195, €189, and £168. In this case the British price appears high, for reasons which will be explained later.

What about those wanting a permanent desk during business hours? For this category, which probably most resembles the traditional company office arrangement, the average prices are $308 and €223. (Not enough coworking spaces in the UK offer this option to be included in the study).

An increasingly common category is a hybrid of options; a flexible desk with 24/7 access. This is the perfect ticket for anyone with a lot of work to do, odd hours, and a small budget – a scenario a lot of freelance workers find themselves in these days. For this option, you’ll pay an average of $209, €232, and £146 per month.

And then there’s the prices for drop-in visitors. Coworkers who travel might like to know that it costs an average of $59 in the US, €73 in the Eurozone and £74 in the U.K. to occupy a desk for just a week. Weekly plans in Britain are mostly found in London only and are not extremely popular in all regions in general. More common is the daily ticket, a fixture on most coworking space price menus. Per day, the average cost is $23, €17 and £24.

This is the second time Deskwanted has produced its average price study. The first, released in December 2010, showed very similar prices. The cost of a permanent 24/7 has crept up slightly in the US from $365 to the present $387. European permanent desks have held steady (in Euros), while prices in the UK fell from £218 to the current £200. Flexible desks have held steady across all zones. The daily price has come down significantly in the UK, from £33 in December to £24 this month since more and more coworking spaces also open out of London.

Update: We would like to apologize for a typing mistake. We wrote, $152 is the average price for a flexible desk during office hours in the U.S. The real price is 195$ on average.