How Profitable Are Coworking Spaces in 2019?

Click on the picture for more stats. (Image: 91 Springboard in Panaji, Goa, India) 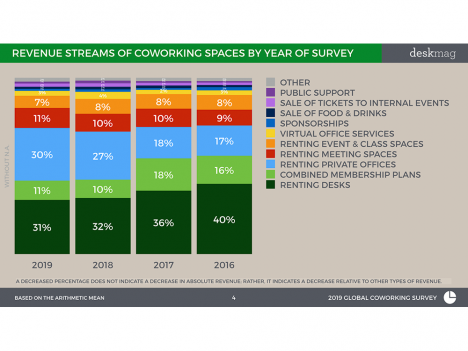 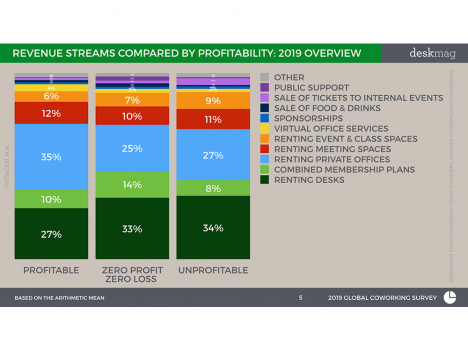 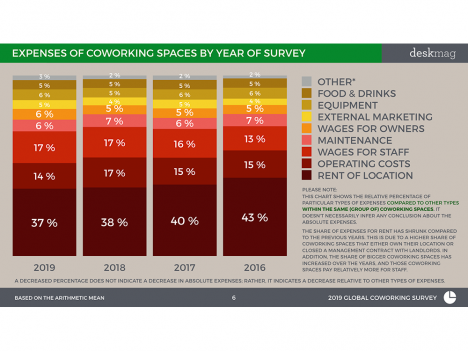 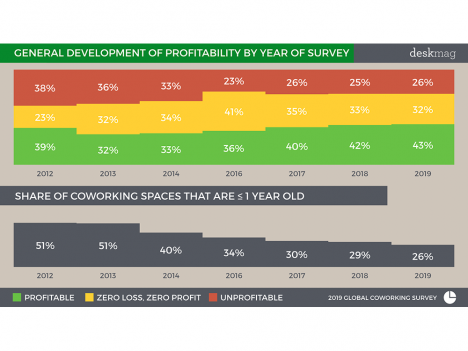 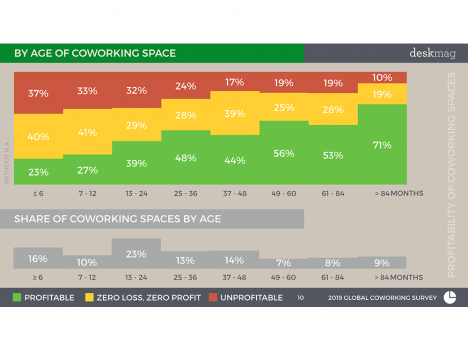 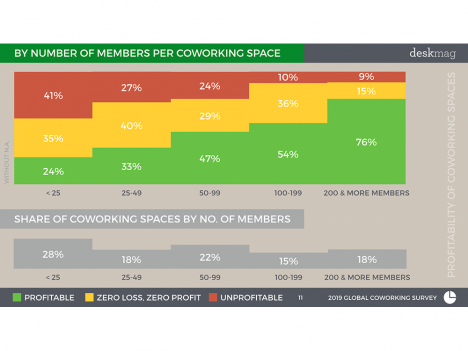 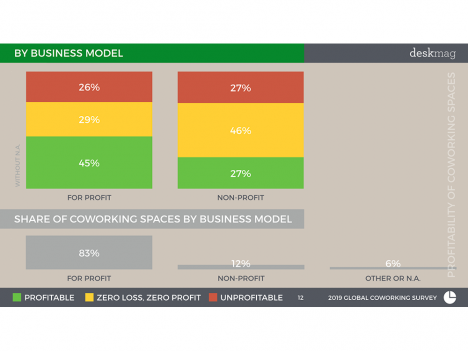 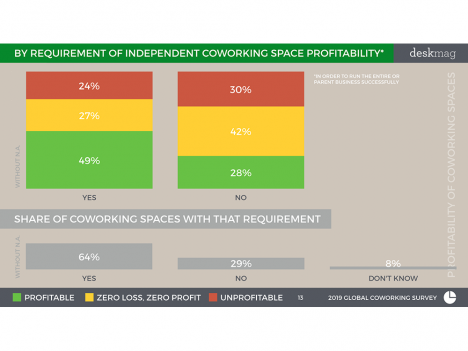 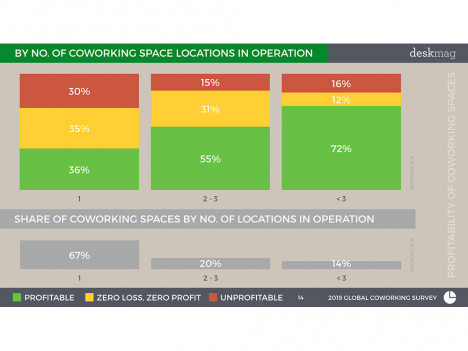 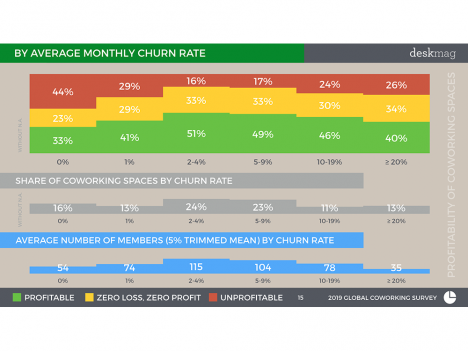 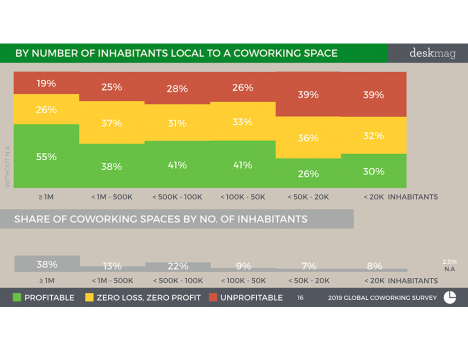 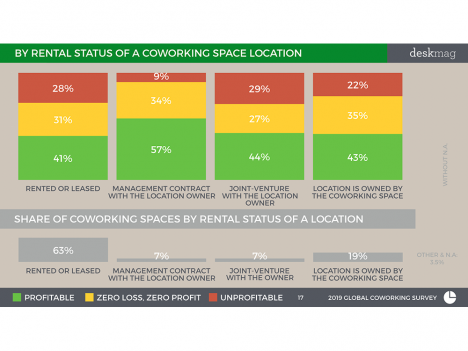 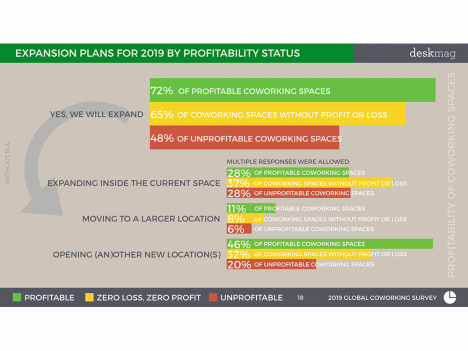 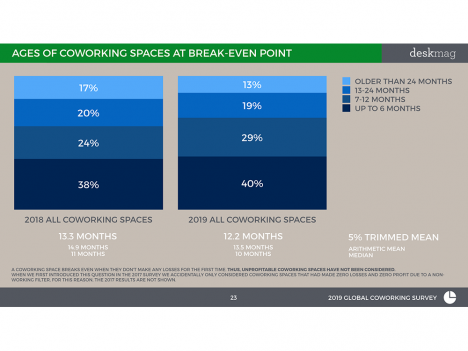 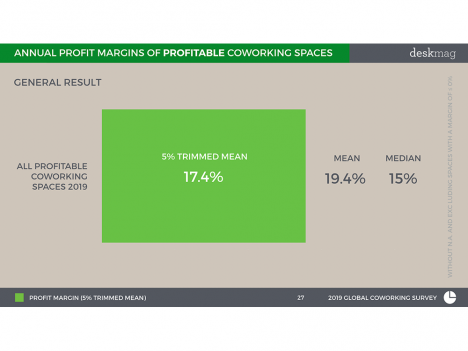 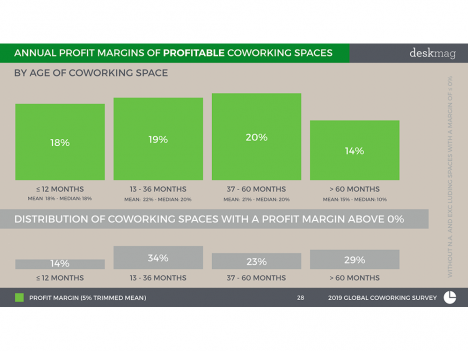 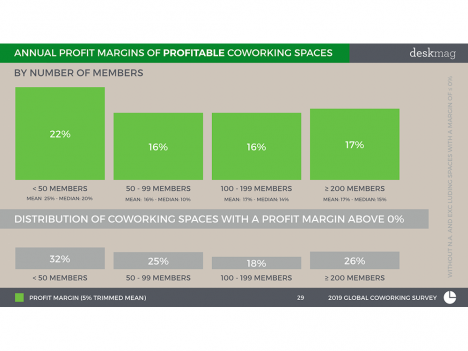 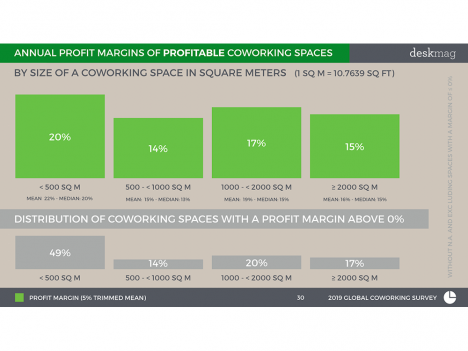 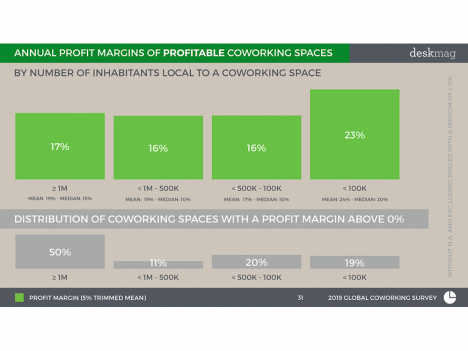 Almost 90% of coworking spaces generate a profit if they meet at least three conditions: they have more than 200 members, are older than one year, and do not subsidize their operation through other businesses. The first condition is the only one that actually requires any special effort. However, these are not the only factors that make a cost-effective operation possible. In addition to these, we are also publishing the annual margins of profitable coworking spaces for the first time.
By Carsten Foertsch - Wednesday, 04 September 2019

For three years now, the share of profitable coworking spaces has remained at roughly the same level, with 43% of all coworking spaces generating a direct profit from their operation. One third of spaces operate at break-even point, whereas every fourth coworking space continues to make a loss.

The independent conduction of the 2019 Global Coworking Survey was supported by Essensys, Yardi & Nexudus.  Download the free report here.

In a similar way, the ratio of core business models has not changed much either. 83% are “for-profit” businesses, and 12% operate as “non-profit” companies. Furthermore, two thirds of all coworking spaces need to be self-sustaining and do not receive cross-income from a larger business model, the same number as in previous years. The share of new coworking spaces that are one-year old or younger - and therefore perhaps not yet profitable - fell only slightly. Nevertheless, a lot has changed compared to previous years.

Profitable spaces significantly increased their revenue stream by renting out private (team) offices (37%). This is now above the level of renting out desks and combined membership plans (merged: 35%).

Accordingly, the average layout of profitable coworking spaces has altered. The working areas are continuing to distance themselves from the classic concept. Private offices now occupy as much space as open workspaces (34%). It is only the additional lounge/coffee space (9%) that enables the open nature of the space to remain.

About every ninth coworking space rents out more than 60% of its space as private offices. In times of high demand for such spaces, this less innovative form of subletting provides a solid financial basis, but does put their classification as coworking spaces into doubt.

Coworking spaces rarely generate a profit when they lose virtually no members or a relatively high share of members each month. In these cases, however, they usually serve a small number. Since small member numbers have a stronger influence on the churn rate, it is more likely to move up or down.

- A particularly large amount of space per desk does not necessarily have a negative effect. Smaller desks with less than five square meters are often just as profitable as the more spacious desks with more than twenty square meters. Between these extremes, however, the profit margin drops much more sharply than in previous years as the surface area per desk increases.

- Coworking spaces that enter into a management agreement with the location owner i.e. they neither rent nor own the site, are often extraordinarily profitable.

The largest proportion of profitable coworking spaces are still located in megacities with more than one million inhabitants. Compared to the previous year, their share increased significantly to 55%, while smaller cities saw a slight decrease or hardly any increase at all. It is only in very small towns that the situation is improving, albeit at a low level (30%).

Unlike in previous years, whether a coworking space is profitable or not hardly depends on whether there are too many, just enough or too few coworking spaces in the area. A space can generally only expect to encounter a much more challenging situation if it acts as a pioneer in its area - with no competitors at all.