How Profitable Are Coworking Spaces?

The second Global Coworking Survey shows that 72% of all coworking spaces become profitable after more than two years in operation. These images are from Inspire9 in Melbourne, which this year expanded to a bigger location. 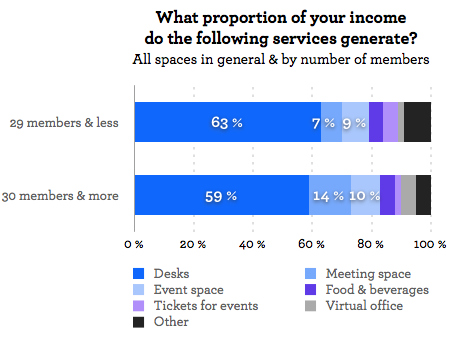 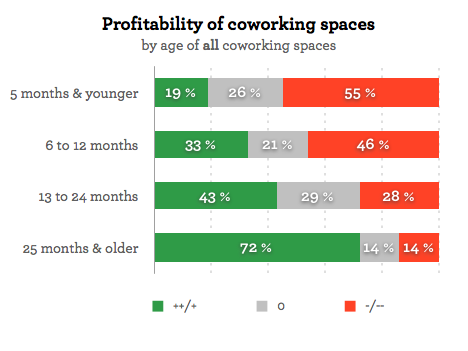 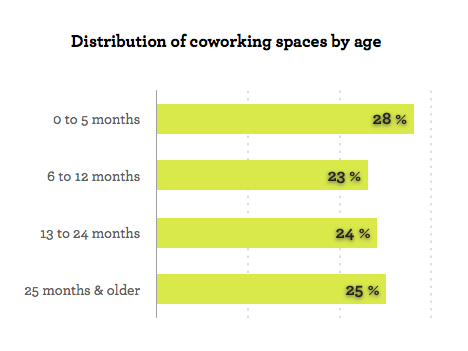 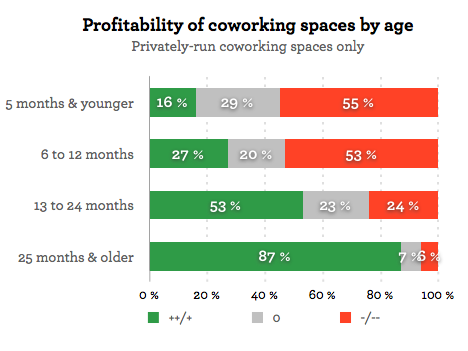 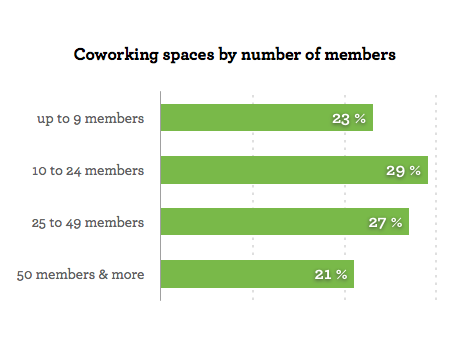 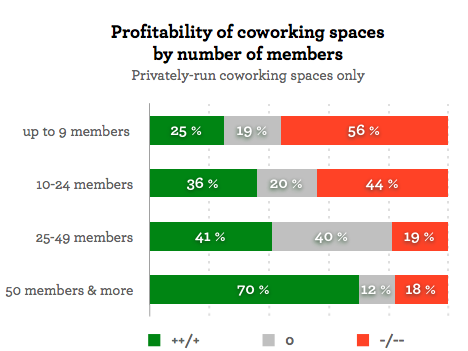 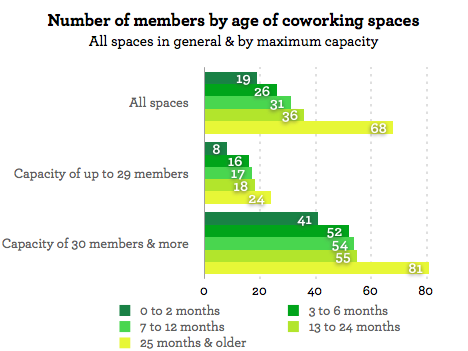 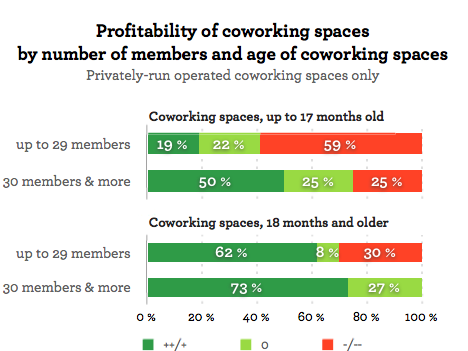 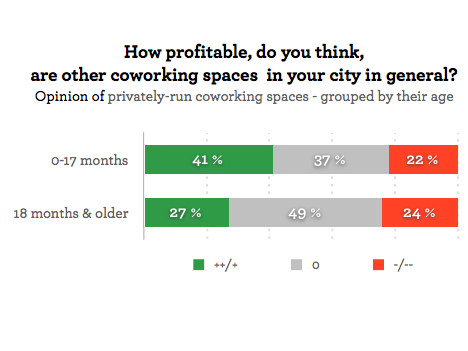 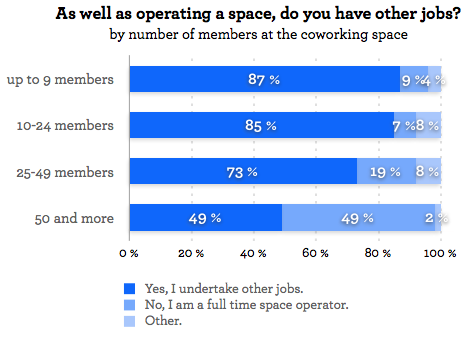 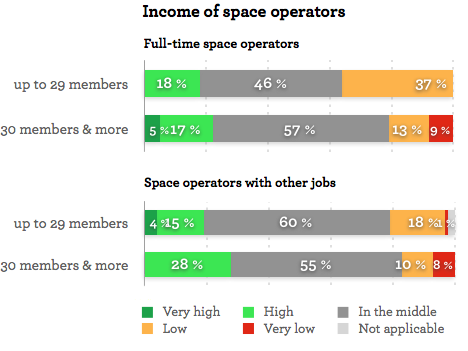 Coworking spaces work on different business principles from other companies. Most of them don’t hide their prices, nor do they lock people into long contracts. The collaborative atmosphere so valued in coworking spaces is based on the trust between its members, and not on profit-squeezing. But can we realistically describe coworking as “succesful” when only 40% of spaces are currently profitable? The answer is yes – when you take into account some simple factors. Especially time: 72% of coworking spaces become profitable after two years in operation. If they are privately run, the rate is even higher.
By Carsten Foertsch - Friday, 18 November 2011

Everyone should earn a profit for their work, including the operators of coworking spaces. The second Global Coworking Survey shows that nearly all spaces are profitable after two years. The majority of spaces live from the income from their memberships, while another large group rely on indirect income from the operator’s second job - those in the start-up phase especially. The worst financial situation exists for the operators of very small spaces who do not have a secondary or concurrent job.

Coworking spaces earn the majority of their revenue, unsurprisingly, by renting out desks (61%). One in ten spaces earn all of their money from desk rental.

The average space earns ten percent of their revenue from renting out meeting rooms and event spaces (10% each). Food and beverages bring in 5%, and the sale of tickets to workshops and events earns another 5%. Unlike business centers, coworking spaces live on a very small portion from virtual office services (3%).

At least a third of coworking spaces offer all these services as an inclusive package, with no additional costs. Infastructure such as meeting rooms are often built into desk rental prices. Other revenue sources identified by the survey include one-time membership fees, merchandise, public support services, fixed phonelines, commissions, rental of private offices, and even the sale of art from the in-house gallery.

Within revenue streams there are differences between big and small coworking spaces. The more members they serve, the higher the income from renting particular meeting rooms. Big spaces are also more likely to sell virtual office services.

On average, 40% of coworking spaces are profitable, according to responses to the second Global Coworking Survey. This initially disappointing figure masks some more complex factors.

First, it should be noted that very few companies in any industries achieve a profit in their first months of existence. And currently, more than half of all coworking spaces are under one year old. That the majority of spaces are not turning a profit could have much to do with the infancy of the movement.

Another important limitation is the corporate form. If 13% of all spaces utilize a non-profit organizational form, economic gains are placed behind social gains for a portion of the industry.

Further and most importantly, 74% of all coworking space operators maintain a second job in addition to their management duties. As the majority of coworkers report a boost to their conditions, so too must managers receive situational benefits from working in their own space.

And finally, the long-term picture should be kept in mind. The second Global Coworking Survey shows that 72% of all coworking spaces become profitable after more than two years in operation. For privately-run coworking spaces (those which are not non-profit groups or government-run), the profitability rate after more than two years is even higher, at 87%.

Three main factors can be identified as the essential elements for a profitable coworking space:

The age of the coworking space: unsurpringsly, newly-opened spaces don’t turn a profit from the day they open their doors.

Space operators and their other jobs: This is crucial, especially for small and young spaces. The profit here is achieved not directly through desk rental, but indirectly through the enhanced operation of their secondary professions.

The bigger the membership, the higher the profit

Seventy percent of all privately operated coworking spaces that serve 50 or more members run a profit. Only one in five spaces in this category suffer losses. Coworking spaces with between 10 and 49 members have a profitability rate of about 40% - close to the overall average. The more members they take on, the more profitable they become. Economies of scale also affect coworking spaces.

The most difficulties are suffered by small spaces with less than ten members; 56% of them report a loss. Even though they pay less rent and have lower operating costs, only a quarter of small spaces achieved a direct profit. It’s important to remember most small spaces are also new; they can develop over time to improve their business model and increase membership, if desired.

The longer the space is in operation, the better it runs

Succesful coworking spaces attract more members and are able to expand. Unsuccesful ones close. Thankfully, the later cases are less common. Nine out of ten privately operated coworking spaces return a profit after two years in operation. Most spaces become profitable between the first and second year. The youngest coworking spaces are the least profitable, due in part to their age.

Because more than 50% of coworking spaces are not older than twelve months, they pull down the average significantly. The negative outlook for the coworking market is therefore a simple result of the age of the industry.

What is the situation for coworking spaces, if they have limited capacity and cannot (or don’t want to) increase their membership? The survey data shows that even two-thirds of spaces with less than 30 members become profitble after two years. Another third reported at least no losses after this time in operation.

Even spaces with a capacity of less than 30 members are profitable after two years, at least about two-thirds of them. A third wrote, even after this time nor losses.

The figures suggest that 30% of privately operated coworking spaces with less than 30 members still operate at a loss after two years, a fact that may threaten their existence. For all spaces, the figure is 6%; and another 7% just break even.

However, the distinction between direct and indirect profit is crucial, especially for smaller spaces. A good coworking space is built for the benefit of its members. By working in such a collaborative workspace, members expand their professional networks, keep their skills and knowledge up to date, and 40% report higher incomes. What works for coworkers should also work for the operators who sit alongside them.

These small space founders must make a bigger initial investment, but they are also able to have more sway in shaping the look and feel of their workplace. Their second jobs benefit as a result of their increased networks.

The survey data shows 64% of full-time operators of coworking spaces with less than 30 members earn an income which is average or above-average, compared to the general working population. But this figure was higher for operators who maintained a second side-job with 79% of this group reporting average or above average incomes. As for the normal coworker, 83% report receiving this height of income