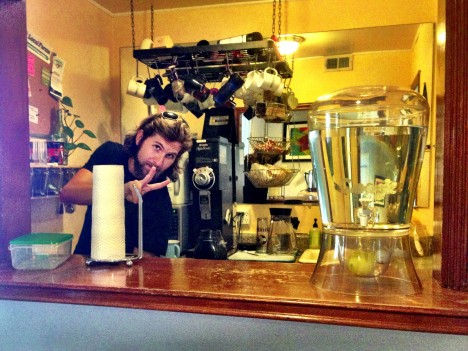 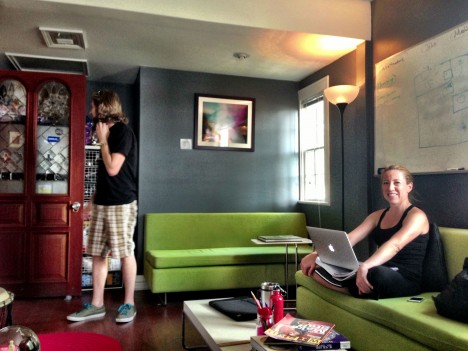 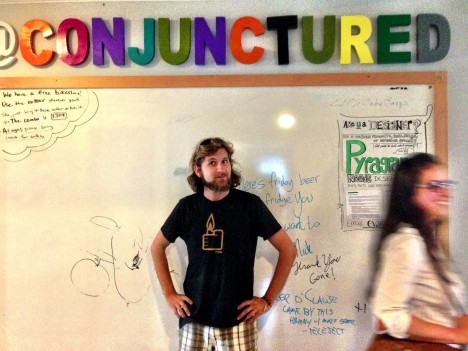 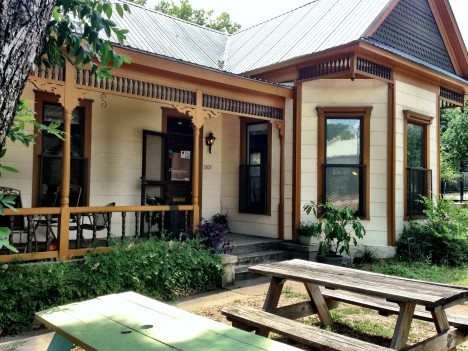 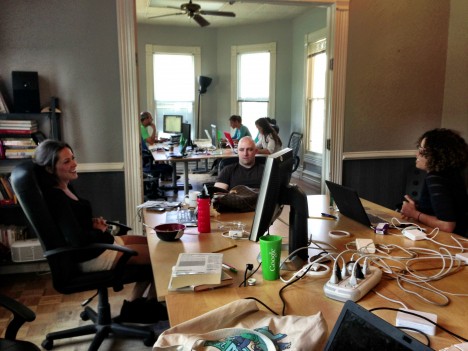 Austin is an economic boomtown with newcomers locating there everyday. Many people looking for a coworking space in the city end up at Conjunctured, run by very attentive, forward-thinking people with an eye for design and a heart for mankind. They are launching a pioneering initiative called corporate coworking, bring the coworking model into the heart of the corporate body in order to reshape and revitalize corporate structure so they attract and retain the best minds the U.S. workforce has to offer. Meanwhile, David Walker works on transcending the stranger society.
By Eva Dameron - Tuesday, 23 July 2013

So how does one restructure a somewhat rigid system and intergrate a social and creative side, which will be able to benefit people and business? David Walker has been tweaking the website to formally launch the Conjunctured’s new pivot, which takes the idea of a coworking ecosystem and combines it with corporations looking to rediscover their culture and rediscover the heart of their organization. Call it cultural evolution consulting.

He’s lucky to have, co-running the Conjunctured team, the esteemed Thomas Heatherly, a former marketing field specialist at Google who calls Conjunctured’s coworking community a friendship machine and works to connect the space to the external community, and Drew Jones, a corporate-behavior anthropologist/professor who helped put together the first book on coworking.

After he read an article in 2006 about the very first coworking space in San Francisco called The Spiral Muse, he had been collecting clippings about every article that came out on coworking while teaching full-time at a business school in England. His new book,The Fifth Age of Work, will be out in late October/early November. Jones has the gift of looking ahead by recognizing the interweaving patterns of cultural trends.

“I knew it was the beginning of a pattern,” he said. “There were, at that time, already 20 million freelancers and it just made sense.”

It was Jones’ idea to combine coworking with corporations to help corporate bodies evolve with the new demands and expectations that go hand in hand with the types of recruits growing up in today’s workforce. The guys at Conjunctured love to quote the statistic that by 2020, 40 percent of the U.S. workforce will be a freelance economy. It’s the mantra that drives them.

“There’s not a coworking space yet that is putting together an offering that is presenting coworking to companies as a change management process,” Jones said. “Companies of all sorts are at different points in their growth. They look to change directions, recruit different sorts of people, or they’re going through a merger, trying to be more mindful of the values they want to try to support in the company.”

They’ll do this by, for one, focusing on opening up the physical space and designing different areas to benefit a range of tasks. Jones doesn’t take all the credit; corporate coworking is Conjunctured’s twist on “activity-based work,” a parallel movement taking place in Germany, the Netherlands, some of the UK and primarily in Australia, Jones said. It’s a concept a Dutch consulting firm first put on the map and started using.

They are inviting a selection of companies around Austin and Houston for daylong workshops to introduce them to the concept of coworking, back up how it works and present it as an option.

“We’ll start that in August; time it with the publication of my book at the end of October so to tie these together,” Jones said. “Come fall, we’ll be much more aggressively supporting this concept. These are new concepts for lots of people, they don’t sink in quickly for many people.”

Welcome To Conjunctured, Are You Familiar With Coworking?

Austin is an economic boom town with newcomers relocating there every day.

It boasts a high rate of successful established coworking spaces all over the city, including Link and Posh Coworking in the North/Central area; Brainstorm Coworking, Opportunity Space, Perch Coworking, Soma Vida, Conjunctured, Space 12, Chicon Collective and Center61 in the East area; GoLab Austin and Capital Factory downtown;  and the art-heavy Vuka located South of downtown. People looking for the perfect coworking space to suit their needs in Austin try a few different ones before settling on their favorite. Many people end up at Conjunctured, the first free-standing coworking house in the United States.

During the 1920s, a family lived in this very house and stored wine in the cellar during Prohibition. Today people work here with the open freedom to bring out their full personality in an office environment. The Conjunctured house has three rooms with large, sleek wooden table where people work at their laptops and thin desktops.

Down the hall there is a bathroom with a sink that holds stones, so when you wash your hands it’s a little like being at a little river; a Zen-garden lagoon below your hands, if you will; a more romantic way to wash up.

Across from the little washroom is the conference room, where a ping-pong table doubles as a conference table.

There’s a kitchen with a full coffee bar, and around the corner from that is the fridge they keep in the lounge room, equipped with lime-green couches, musical instruments, magazines and a scalp massager.

Sometimes it’s full of lively chatter, jokes and brainstorming, and sometimes there’s just one person half-passed out for a post-lunch siesta.

▶ Next page: Learn a bit more about how Conjunctured works...