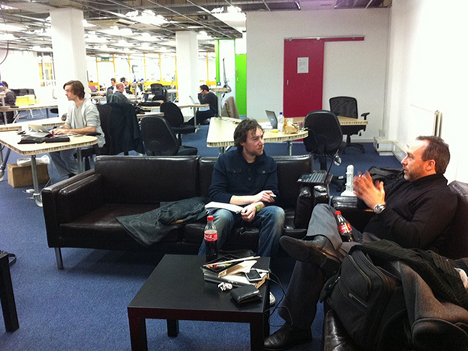 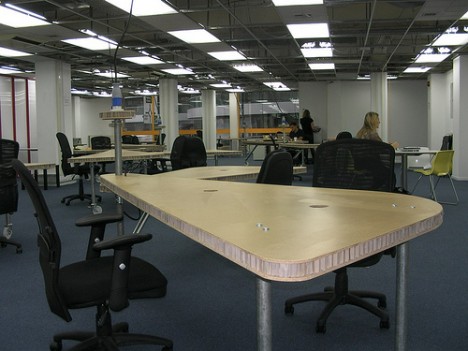 TechHub is Google’s coworking space in London. Not directly or explicitly, but rather through a hands-off sponsorship arrangement that allows it to interact with the coworkers and hear their ideas. Now that Google is on the scene, will other large companies start to see coworking spaces as potential talent pools and idea hotspots? Mike Butcher, editor of TechCrunch Europe and co-founder of TechHub, told Deskmag how it works for his coworking space.
By Joel Alas - Monday, 28 March 2011

Located on a busy roundabout in the Shoreditch area in London’s inner-east, TechHub looks like many other coworking spaces – minimalist renovation, casually-dressed members, the odd dog lying about.

A glance at the events calendar gives a hint of what makes TechHub different: it includes invitations from very large technology companies to hold breakfast discussions about their work.

As an intersection of start-up coworking and corporate interest, TechHub is a fascinating model that could be replicated in other cities and other industry niches.

Google isn’t TechHub’s only sponsor, just the best known. Others include publishing conglomerate Pearson (which owns Penguin, the Financial Times and many other titles), and BlueVia (an experimental phone and web app marketing arm of Spanish telephone company Telefonica).

In return for financially supporting TechHub, the sponsoring corporations can use the space for their events, drop in to meet the coworkers, and stay in touch with developments within the technology start-up scene.

The space opened in mid 2010 under the guidance of Elizabeth Varley, an entrepreneur and event organizer, and Mike Butcher, the editor of TechCrunch Europe. Both well connected, they were easily able to convince the sponsors of the benefits of being involved in coworking.

“TechHub membership is aimed at start-up developers and the ecosystems surrounding them – PR, venture capital, lawyers,” Butcher told Deskmag. “The sponsorship side is born out of the fact that corporates – especially during straightened economic circumstances - have found it harder to innovate.

“A lot of the innovation especially in tech has come out of smaller faster-moving entities. It is much harder for large companies to get a handle on what is going on. Traditionally, how they have done this is by reaching out through editorial brands, or conferences and events… There’s no long-term value.

“TechHub allows them to have a conversation over the course of a year, or just hang out with start-ups. That’s the kind of relationship TechHub brokers. You can’t just replicate it, you have to know how to build communities and be sensitive to the needs of entrepreneurs, especially tech ones.”

Sponsorship doesn’t allow the companies to be “spammy or silly,” as Butcher put it, and neither side pushes the interaction too far: “They sponsor TechHub activities, and get access to our community. They run events here, and we talk to them on a regular basis about the initiatives we are doing.”

For the sponsors, TechHub is an open window on the fast-moving tech start-up scene. James Parton, head of developer marketing for Telefonica, said in a recent TechHub promotional video: “The great thing about the relationship with TechHub is that it puts us firmly in the whole kind of London technology scene. So we’re not kind of isolated in an ivory tower in our corporate headquarters, we are actually sitting here every week with developers, so we can build those personal relationships.”

Only nine months old, TechHub already has international appeal. Having brand name sponsors on board has made it a destination for entrepreneurs from across Europe. Tech developers from Spain, Italy and the Ukraine have relocated to London just to occupy a desk in TechHub.

The demand has led TechHub to operate a two-tier membership model and apply a filtering process: “We get applications to join TechHub every day,” Butcher said. “Part of the attraction is acting as a light-touch filter on the market, to filter out the web designer putting up a few pieces of flash, from someone who is building a real product. That’s who we’re most interested in having as a member.”

As a result, the TechHub floor space is separated into two areas, a residence pod and an open hotdesking area. In the residence room sit the permanent members, who have been selected through the application process and pay £275 a month for their desks.

The open shared workspace next door is for coworkers who pay £375 for an annual membership. That allows them to drop in and use a flexible desk during weekdays, according to a fair use policy. On evenings and weekends the desks are packed away and the same space is used for events. A third “day pass” allows anyone to visit for £25 a day.

As of March, Butcher said TechHub had filled its permanent desks, but was still taking applications for flexible desk users.

Butcher believes corporate sponsorship shouldn’t be considered a problem unless it was undeclared. Others are more cautious about corporations getting involved in coworking.

Alex Hillman of Indy Hall in Philadelphia, one of the strongest defenders of the collaborative community model of coworking, said sponsorship agreements could get in the way.

“I’ve done a lot of sponsorship and fundraising in my time at Indy Hall, and we’re careful about how we do it because we’re so focused on how we do everything that we don’t want someone else’s dollars and the expectations tied to those dollars to change how we operate,” Hillman said.

“I think the coworking spaces that approach sponsors with that attitude of ‘lets get to know each other first’ will find much stronger, longer-lasting business relationships in general, not just related to sponsorships, rather than band-aides to the problems they've created for themselves.

“I guess it all comes down to the same core ideas that I always come back to with how people work together at a good coworking space - relationships first, work second.”

Butcher said he agreed with Hillman’s comments. At TechHub, building lasting relationships between established and start-up companies is part of the philosophy.

Does your coworking space partner with outside businesses? Are you a large company that connects with local coworking spaces? This email address is being protected from spambots. You need JavaScript enabled to view it. how you make it work.