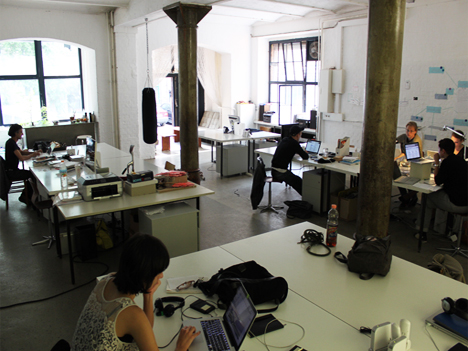 Since the concept of coworking was popularized, many have wanted to package and franchise it through a branded global chain. Today there are three international networks of coworking spaces, though not all of them function as traditional franchise systems. Proposals to create international chains were louder at the beginning of the coworking explosion two years ago. Now, hundreds of independent coworking spaces have opened worldwide, reducing both the need and enthusiasm for chains - at least so far.
By Joel Dullroy - Thursday, 28 April 2011

The growth of the free Coworking Visa network has removed the primary benefit that a branded chain of workspaces might provide – namely, the provision of workspace in multiple countries for a single price.

Instead, today’s chains are focusing on providing access to an international network of individuals, which may hold greater value and appeal for the travelling coworker.

There is also potential need and value for small branded chains of coworking spaces within specific regions or countries, something we’ll explore in a future article.

The Hub is the first and - so far - the only official international network of coworking spaces. The first Hub opened in Islington, London, in 2005, and there are now 28 Hubs worldwide.

Although not planned as a chain, the concept captured the attention of people in other cities, who approached the founders with requests to replicate the brand. Each Hub is independently owned and operated, but they all use the same business model and principles.

The Hub has a focus on social entrepreneurship, a term that it prefers not to define. Rather, it is left up to applying members to decide if they feel comfortable.

“We try to shy away from this academic discussion about what social entrepreneurship is,” says Simon Ulvund, one of four managing directors of The Hub GmbH.

“Instead, we talk to potential members about what The Hub is. We say ‘this is a space for people with good ideas for the world.’ Most people will decide for themselves if they fit. There’s very few cases where people have been refused for not being socially entrepreneurial enough.”

As a member of the Hub Association, you have a right to vote at annual meetings, and receive the support of the international Hub network in setting up and managing your space.

Recently The Hub restructured its internal management, and the founders have moved from management to advisory positions. They have been replaced by The Hub GmbH, an Austrian-based company run by four managing directors who carry out the daily business of the Hub Association.

The Hub has major expansion plans. Ulvund said they envisage increasing the network by ten to twelve locations a year, to a maximum of 100 (a number Ulvund describes as “conservative”). They are also rolling out a concept of pop-up Hubs at conferences and forums, something that has already been tried at several recent events.

Not every Hub space is successful. Hubs in Berlin and Johannesburg closed due to not having the right people in charge, Ulvund said. A new Hub in Johannesburg has since opened, and another team is interested in reviving the Berlin branch in the near future.

Although they are essentially coworking spaces, Hubs do not identify themselves as such.

“When The Hub was founded there was nothing called coworking,” Ulvund said.

“There is a certain shared sense of values and practices, and Hubs do contain a ‘coworking’ space. But we feel it’s not the only thing we do. We are moving away from this space-based-table-rental to a much higher value offering, which is more directed toward our community.”

Put simply, The Hub wants to be known as a network of innovators. The main benefit of membership is access to the community, not just a place to work.

“We are part of the coworking community, but are also a bit different. We also collaborate with local coworking spaces around us. The market is fairly big at the moment, so there is space for everybody at this point.”

It’s not a chain, but a voluntary goodwill agreement between many coworking spaces to allow members of other spaces to visit for free. The Coworking Visa arose naturally as a non-commercial network that fits the community ethos of the movement.

It works like an exchange program, allowing members of participating coworking spaces to work in spaces outside of their hometown, and provides a valuable way to network when travelling.

Some moves were made to specify and standardize the rules and limitations of the Coworking Visa, but these were unsuccessful. Instead, it operates on an unwritten fair use policy, and it is up to each space to determine what they offer and for how long. Usually a courtesy note ahead of time is requested, and the visiting time is often restricted to three days.

The existence of the Coworking Visa acts to dampen the enthusiasm for the development of a proprietary commercial chain of workspaces. It removes the only potential advantage that such a chain might offer coworkers – that is, the possibility to use other workspaces at no extra cost.

Currently 180 workspaces in 36 countries participate in this program, from Australia and Argentina to many countries in Europe and Asia as well as in Canada and the U.S. Two years ago, only 22 spaces were part of this program. And this thread of the Coworking Google Group tells you the story, how it once started in 2008.

Like The Hub, The Business Class Net (or BCN) began before the coworking name and concept had solidified. It’s not so much a chain as a loose listing of seven small workspaces at holiday destinations that share a common brand and a website.

Some of the spaces aren’t really for coworking only – the New York “office”, for example, is actually an holiday apartment with an atelier and internet access. Many of the other locations are art studios or private workspaces that are open to receiving visitors.

The original BCN site is in Berlin, and it does function like a coworking space, minus emphasizing the terminology. It was founded in 2006 by Manu Kumar, an artist and entrepreneur. Like many people at the time, he had the idea of a shared office that could be used by travelling creative workers, which can't connect themselves to the local scene just by working in a café or an airport lounge. Having established the name, he allowed other people to use it.

The BCN network seems to have stalled a little. It is less interested in quantity but quality by adding small spaces which already has established themselves for a while. For Manu, a good connection to the local scene is the best benefit which a flexible workspace can offer. As artist and entrepreneur, he is also interested in going forward by starting new projects. Yet the Berlin base is still going strong, and is a really pleasant place to work. A space in Miami will also be added soon.