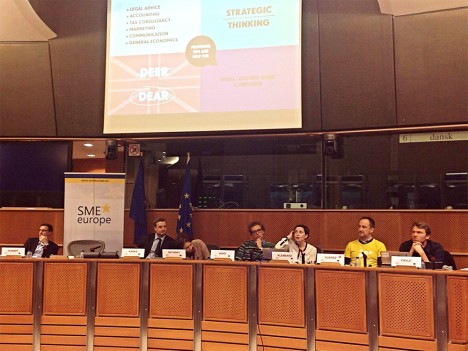 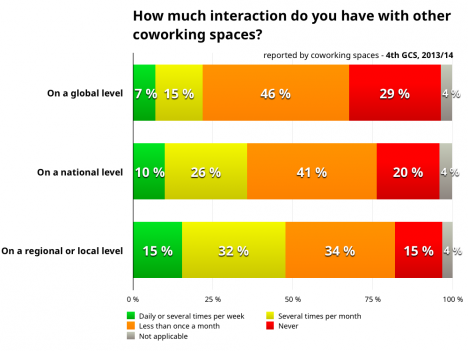 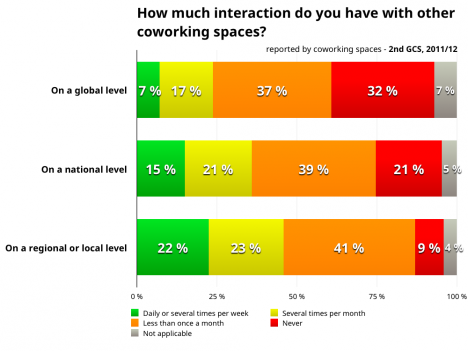 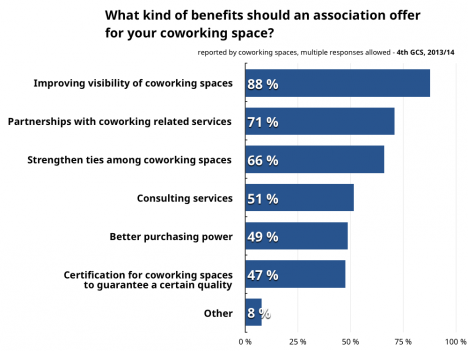 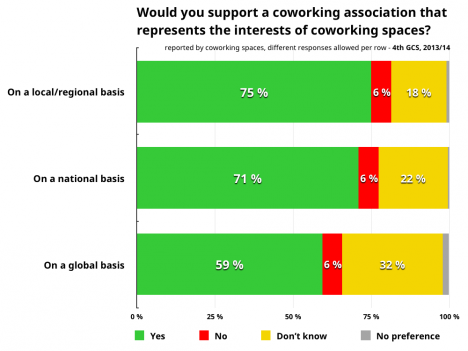 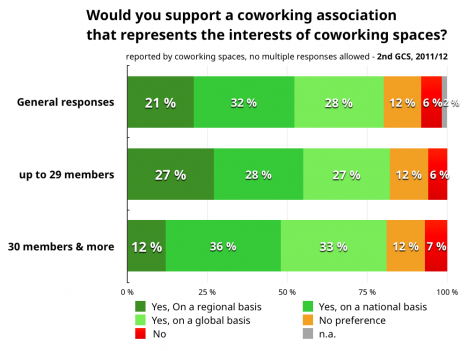 Coworking, in its essence, is independent and encourages networking. But how connected are coworking spaces to each other? How do they actually relate to an association that focuses on combining forces? Just last week, an initiative of a potential European coworking association spoke to the EU Commission. We asked in the fourth Global Coworking Survey what concrete results coworking spaces expect from these associations and at what level they support such operations.
By Carsten Foertsch - Wednesday, 11 December 2013

Today, we publish the first results of the fourth global coworking survey and begin with coworking spaces which form associations on local, national or international basis.

Some coworking spaces have long been skeptical about this idea. Approximately one in fifteen coworking spaces can not get anything out of it. Two years ago, the rejection was on exactly the same level.

The majority of coworking spaces would support associations, local organizations tend to be the most favorite

A majority of the coworking spaces showed that they would mostly support initiatives at all levels. Local organizations would gain more backers (75 %) in comparison to their national (70%) or international (60%) counterparts.

Two years we offered only one option, which they could choose when asking this question. At this time, national federations received the most interest, but only with a slight difference to local and international organizations.

When offering more options this time, there was no increase in the rejection of an idea, but a hesitancy that resulted from a wider range of possible answers. The higher the level, the more often coworking spaces couldn’t decide whether they would simply support such initiatives nationally or even globally. One reason for this is the current exchange behavior. The less they communicate with one another, the stronger their indecision grows. Not surprisingly, the rejection decreases towards associations with a growing level of interaction on each basis.

Compared with the answers from two years ago, the communication behavior between the spaces hasn’t changed much. The international exchange increased a bit, while the local exchange decreased slightly. However, the most potent interaction can still be found among coworking spaces within their hometown and the surrounding area.

The most important goal: Improved visibility of coworking spaces

Coworking spaces offer memberships to their clients as a chance to be a part of a community without losing their independence. It seems to be crucial for associations to utilize the same system. Therefore, the key to success for associations is found when they can create value and find common goals as basis for communities, and help to hold them together. In recent years, associations have developed in many cities, mainly to present the coworking concept to a wider audience.

This year, coworking spaces, based in Boulder (Colorado, USA) formed a joint Coworking Week with an appearance from the Mayor. In Toronto these was a joint initiative of people who worked in various coworking spaces across the city with only one “Coworking Pass”, which allowed them to familiarize themselves with the community. A similar project happened in Germany two years ago, known as the Coworking Summer. In Seattle there is the Space Traveler Program, which is a permanent offer that allows to people to find the right coworking space for them.

The results of the Coworking Survey show that nine out of ten coworking spaces that would support such initiatives see the main purpose of their membership as a way to greatly improve the visibility of coworking spaces. Two thirds of all coworking spaces would like to strengthen their own space and relationships with other spaces, based on the influence of the aforementioned associations.

In second place (71%), coworking spaces wish partnerships which communal benefits can be passed to their own members, such as discounted car sharing offers or other services. Since August of this year, in the Canadian province of Ontario, CoworkingOntario offers health insurance. This can be greatly beneficial to the members of coworking spaces, who are typically freelancers and were previously denied insurance or couldn’t afford it. Every second space also wants to incorporate counseling, which could be used to find (public) funding, for example.

Internationally, there is also great progress, which has resulted in the European coworking Association. Just a few days ago, the association reported that there will be a committee of the European Commission on the coworking movement and campaigned for inclusion in the StartupEurope program. The EU noticeably appreciates that coworking spaces function as innovative work places.

The EU representative of the Digital Agenda, Nellie Kroes, said:. "Europe doesn't have Silicon Valley, but we don't need to either. Instead, we have a geographically spread set of clusters all rich in creative talent (...). Coworking spaces bring their own contribution to this ecosystem, making it easier and cheaper to put ideas into practice, more social and less solitry. Sharing a space, so it's easier to network, to swap ideas and absorb a new kind of culture and supporting start-ups. Because the best coworking spaces are not just a desk and a coffee machine, but a full professional program of training and progression to build a creative, capable cohort of talents"

Now, Germany also stands before the founding of an association. During the next German Coworking Barcamp in February, a national association shall be created.

The Global Coworking Survey will continue until mid-December and can be found on www.coworkingsurvey.com. The questions for today's results have been taken offline, so that the publication does not affect the response. However, there still remain many interesting questions, and the results will be published in the coming days and weeks.

Thanks to all people who took part in the survey as respondent and supporter!