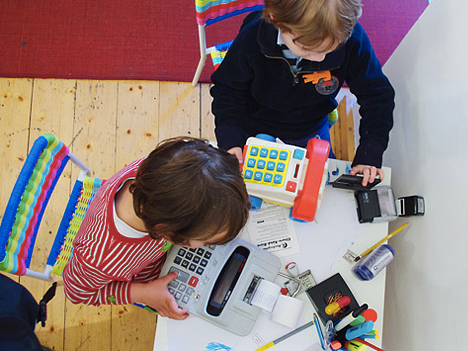 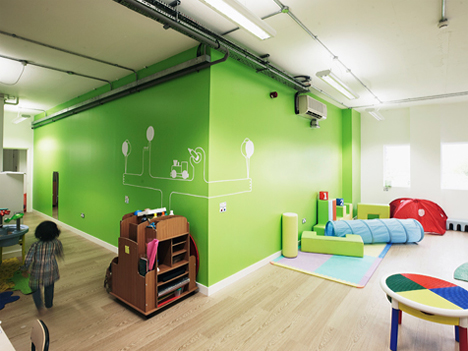 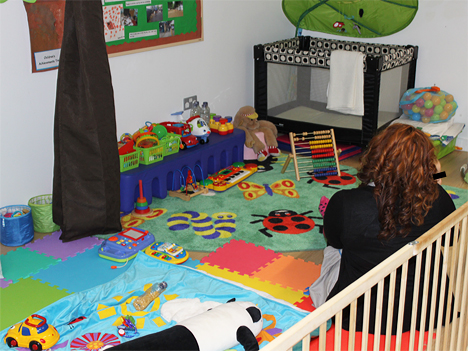 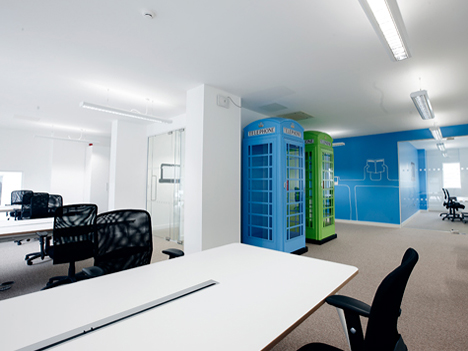 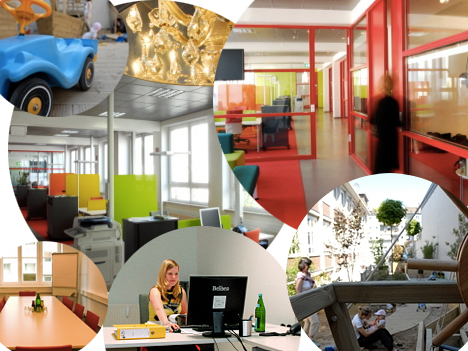 Approximately one in ten coworking spaces opens its doors to children on the condition that they do not disturb other coworkers. Very few provide child care in order to afford one or both of the parents the opportunity to work in peace. The service requires a greater deal of investments which are rarely associated with the core business of a coworking space, while the related legal requirements often need even more investments. We visited three coworking spaces which, despite these additional challenges, still dare to take them on.
By Johanna Voll - Wednesday, 11 January 2012

The UK's child protection laws are among the strictest in Europe. Taking photos of children other than your own is not permitted. Even children's birthday parties prove to be difficult, theoretically. Unless you have a state license, you cannot care for children which are not your own ones. Third Door, a coworking space in South West London’s middle-class Putney district, has one of these licenses. The conditions are by no means lax.

To start with, new visitors to the work and play spaces must identify themselves in accordance with the legal requirements; their shoes are packed in plastic bags. The flipside is that the individual rooms are designed in a friendly manner.

While a mother and father work in peace on the first floor, up to three trained house mistresses look after their child on a large, bright playground on the ground floor. The desks and meeting areas also follow a green and blue color code. Both sections share a lounge area which also belongs to the entrance. A communal “third space” connects the members with one another; Third Door organizes workshops and network events on its own premises.

The coworking space offers room for up to 24 children between zero and eight years of age and almost as many work spaces for their parents.

With this combined concept, founders Shazia Mustafa and her husband Yusuf Chadun have already been acknowledged with several accolades. Before the official opening in May 2010, they had already worked on a business plan for two years. The birth of their first child provoked the initial idea, while the decision to create the space came with the birth of their second child.

In preparing their space, they looked at Cubes & Crayon, a space in the U.S. with a similar concept. Should you opt for your profession or your child? Third Door offers a third alternative. You can be there for your child and still successfully commit yourself to your work. Third Door is enjoying success in its own right – another space is being planned for this year.

Located on the first floor of an old building in Leipzig, a parent-child coworking space known as Rockzipfel opened its doors in the spring of 2011. Rockzipfel’s members organize pretty much everything on their own, including child care.

The spacious apartment, which still has oven heating and ceiling moldings, has been lovingly renovated and currently offers ten coworking spaces. Next to the large playroom is an open work space where one can speak and eat at their leisure. The other rooms offer peace and quiet for a calm environment in which to get work done or for children in need of an afternoon nap. Coworkers can use the small kitchen that is provided or go for lunch in the downstairs café. Generally, everyone is encouraged to take part in tasks such as cleaning and shopping.

Since Rockzipfel is still dependent on donations, it only makes sense that everything here seems to have been somewhat culled together. During a visit, a few elderly women dropped by to donate an old wooden chest. The project cannot (yet) support itself.

Initially, coworkers themselves would take care of each other’s kids while the others worked. However, this concept could not be established as a permanent solution – specific care periods needed to be organized. Child care is now regularly offered from 9 a.m. to 12 p.m. and 1 p.m. to 3 p.m. It is organized by volunteers who receive free room and board in return.

In offering this service, Rockzipfel does not take over the responsibility of the parents whose children are being looked after. For legal reasons, the children never leave the coworking space without their parents.

Rockzipfel does not wish to be a substitute for a proper kindergarten. Johanna Gundermann, the founder of Rockzipfel, thinks that if it was, it would no longer be a coworking space. Besides, kindergartens have to meet many legal requirements which in turn cause costs to increase drastically.

Rockzipfel therefore primarily assists mothers and fathers with young children (under three years of age) by serving as a temporary solution until the families find a proper kindergarten. The parents are always working close by and tend to changing their child’s diapers, feeding them, or bringing them to bed.

Since there isn’t a unified educational concept, a degree of tolerance is required amongst the coworkers - they control everything individually. The members therefore talk a lot with each other and create a strong sense of community. In the afternoons, there are additional events and courses that are primarily focused on children.

Johanna thinks that coworking and coplaying can only succeed if there is a low-budget system with monthly contributions (currently 150 euros per month) and if the parents volunteer to carry out tasks. The concept surely doesn’t appeal to every potential coworker, but for those who want to know that their children are being well cared for in the immediate vicinity, the quiet and comfortable atmosphere that Rockzipfel offers is appreciated.

With red doors next to a green counter and a yellow bar, the Kölner Zeiträume (“Cologne Time Slots”) are indeed colorful. However, nothing seems overdone and there is a calm atmosphere. The Zeiträume opened with the motto “Office and More”. The founder, a mother herself, wanted to combine the social interaction that work and family provides in one place. A kindergarten has been available ever since the establishment opened more than four years ago. At the same time, a large open space in which up to 20 people could work was started.

Though different than many coworking spaces, nowadays the Zeiträume mainly offers flexible single and group offices for rent. They run magnificently and are different than the other open work spaces. Even the website states that “The open office area sometimes looks over to the private offices with eyes that are somewhat sad and envious. (…) The open office needs friends!!!” It is currently limited to three tables and will be extended if necessary.

One floor down, the prospects are even bleaker. The kindergarten in the basement will be axed in March 2012 if a new owner doesn’t step in. The original concept did not work, as the combined care service for the children was rarely requested. While little ones like Max and Louise played in the small garden or ball pool, mom and dad were supposed to be working upstairs. Currently only one person is taking advantage of both the work spaces and daycare. Fifteen other children come into the work rooms without a parent.

However, there is space for up to 34 children. They can continue to play here, but it is no longer under the direction of the Zeiträume. There is already interest from some parties and negotiations are taking place. Due to a lack of demand, the fitness services and physiotherapy also didn’t become firmly established.