Coworking: Half the cost of a traditional workstation 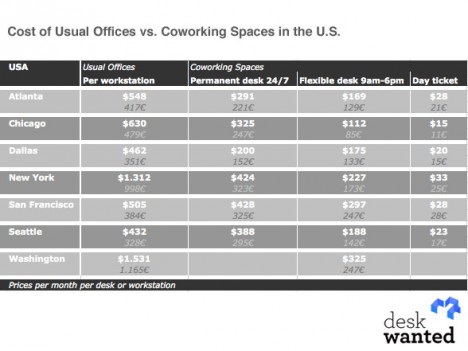 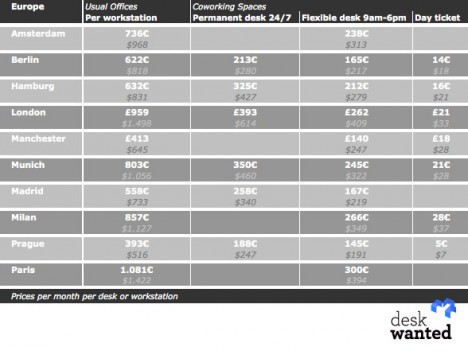 Desk rental in a coworking space costs half as much as maintaining a workstation in a regular office. The real average cost of both coworking and regular office space has been compared for the first time in a global study of desk rental figures. The result is that coworking beats office rental by more than 50% in most cities where the shared workspace concept is active.
By Carsten Foertsch - Thursday, 02 December 2010

In the United States, a coworker pays an average of $365 a month for a desk with normal office infrastructure and 24-hour access. Comparatively, a desk in a typical office costs $733 on average. The situation is almost the same in continental Europe and the United Kingdom. In Europe a coworker pays €259 for a permanent always-accessible desk, while regular office costs amount to €588 for the same. In the U.K. they pay £223 compared to £404.

The coworking figures come from a study by Deskwanted.com, a new platform for flexible desk rental in coworking spaces, shared offices and business centers. These figures were compared to average office rental prices, which were calculated by British commercial real estate consultancy firm DTZ, studying 116 regions in 50 countries.

The figures from Deskwanted also considered the different prices available for flexible desks during office hours, or for daily rental prices. Under flexible price categories, the average cost in the U.S. is $192 per month, €195 in continental Europe, and £262 in the U.K. If paying per day, coworkers are charged on average $23 in the U.S., €19 in Europe and £23 in Britain. The U.K. appears to be a lot cheaper in general, but London is the stand-out exception.

However, it is difficult to compare prices between the regions due to fluctuating currencies and costs of living. Yet it appears that the U.S. has cheaper real estate, while European cities have higher general commercial property prices. Washington, New York and Boston are the only U.S. cities with extremely high office prices.

When considering the category of flexible desks, it should be noted that many coworking spaces offer a wide variety of plans, featuring highly variable access times, number of working days per month and other factors which skew the price. This is stabilizing, particularly in Europe, where a few standardized pricing models are becoming prevalent. It is predicted that more standardization of prices and infrastructure will occur as the coworking industry grows and matures.

The study also tried to pinpoint the conditions which make a city favourable to coworking. Interestingly, coworking did not emerge in cities where traditional office costs were highest, where it might be expected that the price advantage would encourage its development. But in the home of coworking, the U.S., there are still only a few coworking spaces in the most expensive cities - Washington and Boston - which shows that high commercial office costs prohibit the formation of coworking spaces, rather than encouraging their development. New York is an exception here because of its unique population structure with more creative individuals. However, the initial coworking cities, such as San Francisco, had not only the creative individuals but also comparatively lower commercial rental prices which created a suitable testing ground for the coworking concept in cheaper vacant office space.

The study also gives a glimpse into the potential future price development of coworking spaces. San Francisco provides an interesting case study. There, the cost of a full-time desk in a coworking space ($428) is closer to the average cost in a regular office ($505). Despite this, demand for coworking spaces in San Francisco remains strong, showing that coworking has much more to offer than just a price advantage.

Deskwanted is the new sister website of Deskmag. We provide a new listing directory for coworkers and coworking spaces with this service.