Many coworking spaces plan to expand this year, either internally or by opening a new location. Click through the images to see the results of the 2nd Global Coworking Survey. 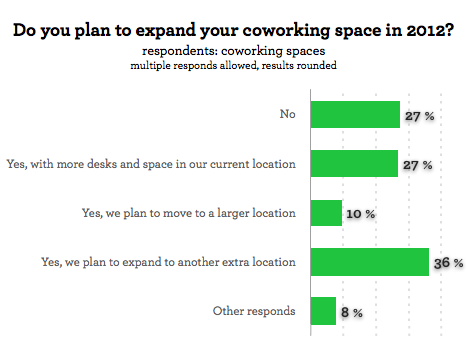 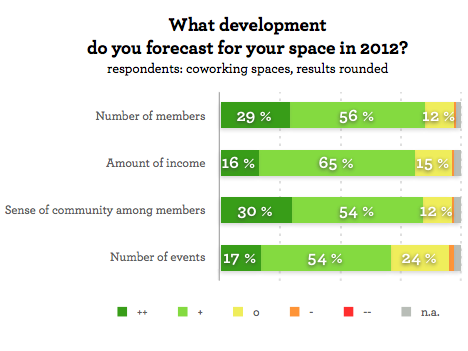 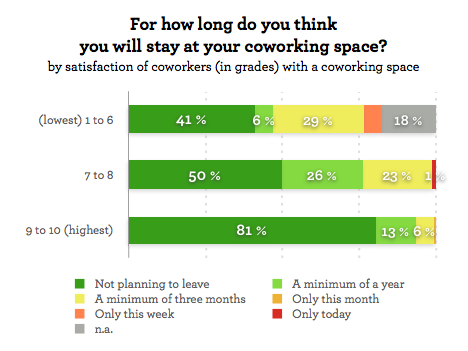 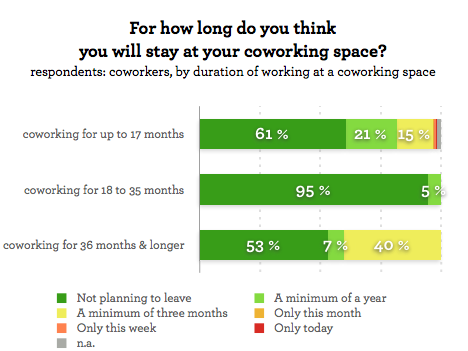 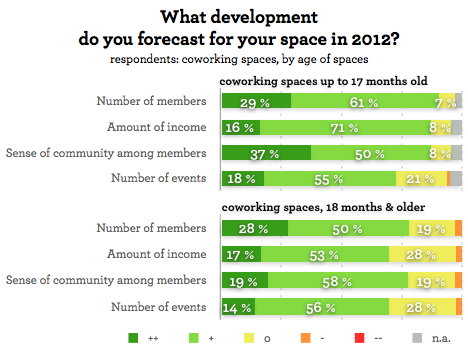 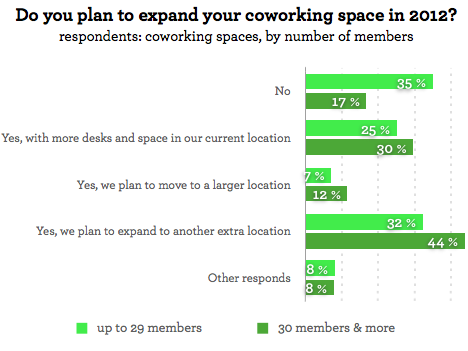 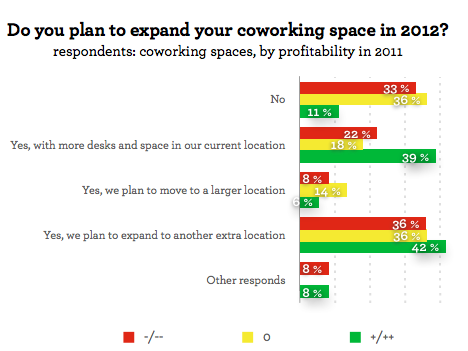 More than one in three coworking spaces plan to expand by opening a new location this year. That’s one of the major takeaways from today’s release of results from the 2nd Global Coworking Survey, which focuses on the development of coworking in 2012. How will coworking spaces develop in the new year, and what plans do their coworkers have for the coming twelve months? Some good news; the overwhelming majority of coworkers plan to stay in their present workspace.
By Carsten Foertsch - Tuesday, 03 January 2012

We often hear reports about coworking spaces that would like to open a second or third location. The 2nd Global Coworking Survey has now put some hard numbers on that desire: 36% of all coworking space operators who took part in the study said they plan to open at least one new location in the coming year. If all carry out their plans, this would add another 350 coworking spaces to the global total.

Even those that don’t want to create a chain of spaces plan to expand in other ways. Ten percent say they want to move to a bigger location, and 27% said they will add more desks to their present location. Only 27% said they had no plans to expand at all.

What’s interesting is to see how the desire to expand waxes and wanes as a coworking space ages. For instance, spaces that are 6 to 12 months old are less likely to have external expansion plans (only 24%); instead, they want to focus on increasing the capacity of their existing workspace (41%). See the charts in the picture gallery for more detailed analysis based on coworking space maturity.

As might be expected, the size of a coworking space’s membership affects the expansion plans. Those with more coworkers are more likely to think about expanding. Most often, these spaces think about opening a second location, with expanding internally or moving to a bigger space being less common.

The current income of a coworking space affects plans for growth, but not in the way expected. It’s not just the profitable spaces that plan expansion – in fact, 11% of those spaces have no expansion plans at all. Of the spaces that want to open a new location, only 44% are presently profitable, while the majority of the expansion-planners are either making a loss or breaking even. See the charts for a more detailed analysis.

The overwhelming majority of coworking space operators are very optimistic about the coming year. About 85% believe their membership numbers will rise sharply. 81% expect to see a significant or very signficant incrase in their revenues. 84% predict a strengthening of community sense in their space. And 71% are planning to hold many more events in their locations.

Their optimism is supported by the positive outlook of their members. The vast majority of coworkers (82%) plan to remain in their current workspace this year. Even better, over 65% say they have no plans to leave their coworking space at all, 17% will remain for one year, and just 14% plan to exit after three months.

Unsurprisingly, the more a coworker likes their space, the longer they intend to stay there. We asked coworkers how much they like their workspace, on a scale of 1 to 10. Spaces that were ranked 9 and 10 are likely to retain 94% of their members, while less popular spaces (ranked 1 to 6) are likely to see half their members drift away over the coming year.

Coworking spaces should of course serve all their members with equal attention, but the survey shows that some groups require more support than others, if they are to remain members. Those who have been coworking for more than three years are the most likely to feel the need to move on. Of this demographic, “only” 60% plan to remain in their present workspace this year, compared to almost 82% of newer coworkers