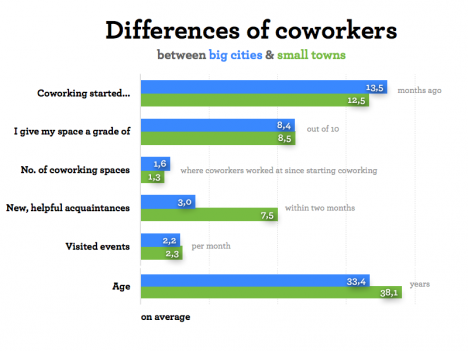 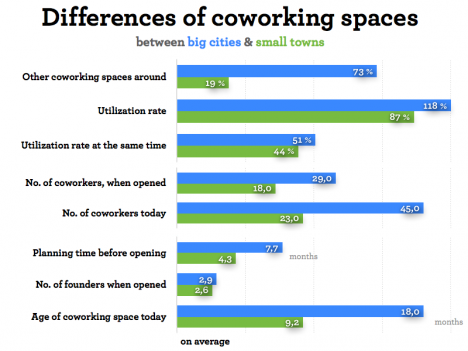 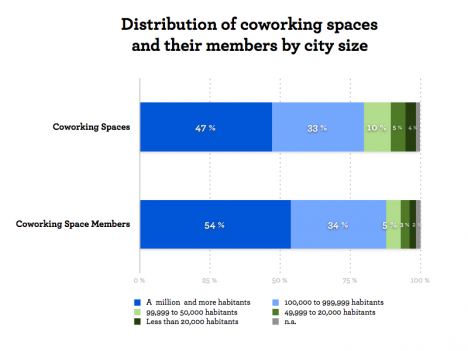 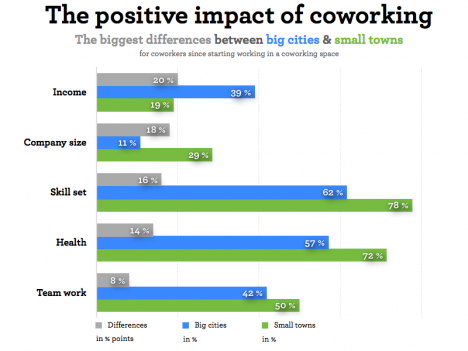 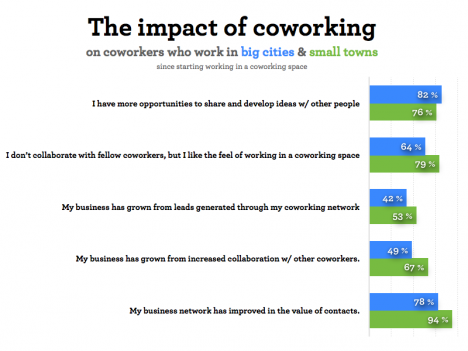 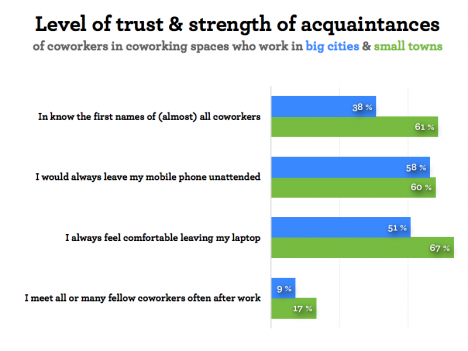 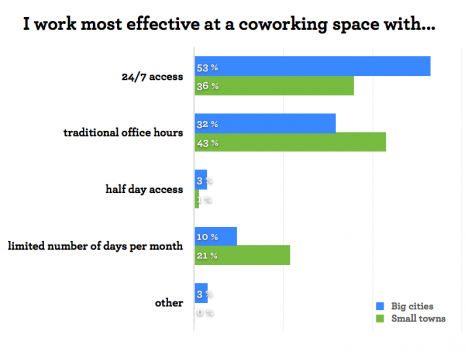 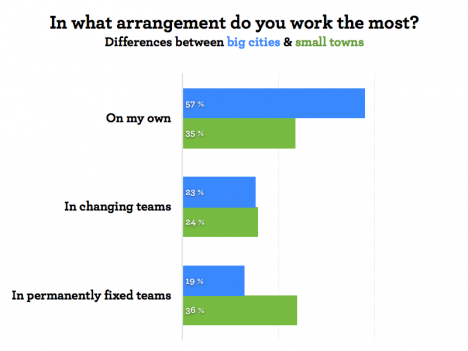 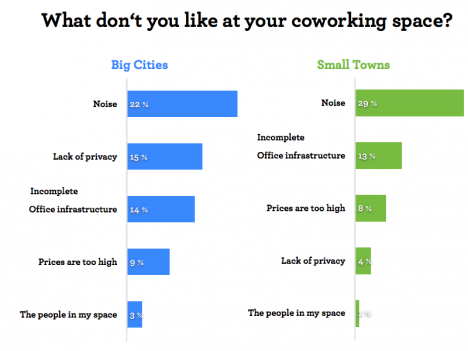 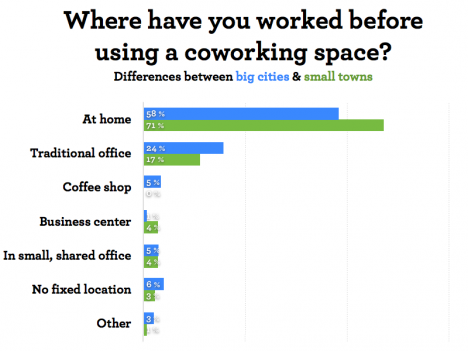 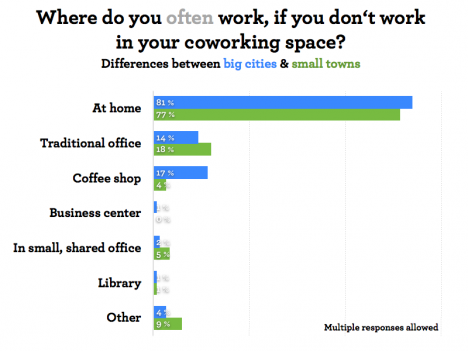 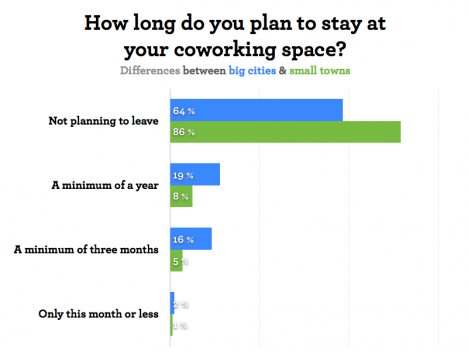 Coworking spaces in small towns are much younger than in big cities, but they are built in a shorter time. The tendency is that the smaller the town, the smaller the space, so it is not surprising that most coworkers in these spaces often know all the names of the other members. Despite the sharp increase in the number of rural coworking spaces, they often operate as the only location in the wider region. Coworkers in these spaces are therefore more ‘loyal’. In our penultimate part of the Global Coworking Survey, we present the differences between coworking spaces in small towns and big cities.
By Carsten Foertsch - Wednesday, 05 September 2012

Small-town spaces are generally smaller, opened only nine months ago on average, and have fewer members working in their space on a daily basis. This explains why they are less likely to be (currently) profitable. Only slightly more than half of spaces in small towns have expansion plans, compared to three quarters of coworking spaces in big cities.

Smaller communities can be an advantage, however, since there is less anonymity within each space. Members of smaller spaces are more familiar with one another and so meet significantly more new contacts who support them in their work.

Coworkers in small towns have been working in their given jobs for a longer time and are, on average, five years older than the city dwellers. As was the case in last year’s results, this is an important factor, affects how coworking impacts them. While city-dwellers often experience a rise in income since coworking, inhabitants of towns earnt comparatively more before joining a space. The increase in income will therefore be less.

In towns, one in three coworkers reported using coworking spaces to establish or grow a business. In cities, they number only one in ten.

Urbanites especially appreciate the heightened opportunity to work and share or develop ideas with others, since they often work alone. In contrast, town-dwellers benefit from an expanded business network. They work more often in fixed teams and are therefore less interested in initiating projects with other members (which does not suggest they are not interested in at all.)

Nine out of ten coworkers also work outside their coworking space, regardless of the size of their city. The most popular alternative is still the home office (around 80% for both groups). In large cities, cafés are the second most common alternative (17%), while coworkers in small towns prefer a traditional office as second choice (18%).

Urbanites often use their coworking spaces daily. Coworkers in small towns use them less frequently, around one to two times per week, explaining why having a home office in a small town still seems to be a more relevant place to work for them.

This result clarifies a further question. Urbanites work most effectively with flexible, 24-hour access, while small-towners prefer more traditional office hours; one in five would even be satisfied with a limited number of days per month. In large cities, that only applies to one in ten.

Layout and the size of a small-town spaces are often the same as spaces in cities, but they must invariably have an on-site carpark since - unsurprisingly - most coworkers drive to their space (in the US, this statistic also applies to coworkers in bigger cities). Cycling is the most popular alternative in rural areas, since a good public transport system rarely exists.

What is the common factor between spaces everywhere? Their popularity: coworking spaces enjoying the same high popularity whether in a small town or big city. Small towners are only limited in their choice. Yet they think less of changing spaces.

In order to simplify the analysis, we divided the definition of ‘city’ into two groups: places with fewer than 100,000 inhabitants were considered ‘small towns’; all places with 100,000 and more inhabitants were classified as 'big cities'. It should be noted that we are sensitive to the fact that the definition of a 'small town' or 'township' differs from country to country; for the purpose of this study, we have used these figures.