Cashing in on coworking

The Conference on Coworking in Brussels 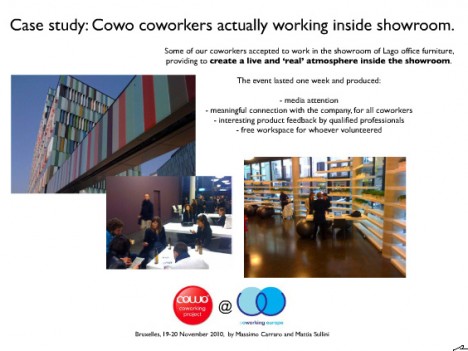 Should coworking spaces become “marketing platforms” for brands wanting to reach freelance workers? That was the controversial suggestion made by Italian coworking space owner Mattia Sullini at the Coworking Europe Conference in Brussels today. Sullini said spaces should embrace the opportunity to be conduits between brands and their customers, the hard-to-reach nomad worker.
By Joel Alas - Saturday, 20 November 2010

As coworking grows as a trend, it will be seen as a valuable demographic, with products and services crafted particularly for them. “Coworking spaces can be a place to market financial products dedicated to nomad workers,” Sullini said. He put forward several other unorthodox suggestions, such as calling for free publicly funded coworking spaces to be opened in every city, in locations such as the city hall or airports.

And he suggested that coworkers could be placed inside model showrooms, used by design firms to showcase their interiors, to help bring such spaces to life. The suggestion to cash in on the coworking trend may make some in the network uncomfortable, particularly given the community base of the movement. But his speech was followed by an enthusiastic tweet from TheWorks coworking space in Prague, who said: “Space is not the business model. Capturing the value out of and with the community IS.”

The issue of commoditizing coworking is likely to become a major debate in the industry as it gains popularity. You can download the whole presentation here.

More articles on the Coworking Conference in Brussels:

An official coworking association? Not yet.