The infrastructure of coworking spaces 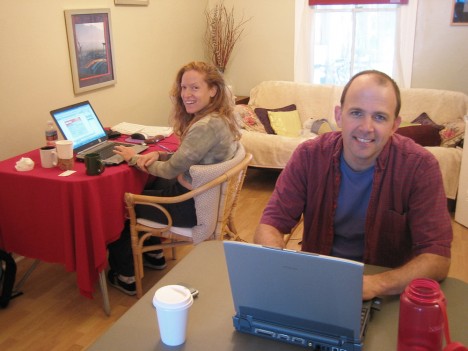 Six years ago, the first coworking space that actually called itself a “coworking space” opened its doors - an event marked by yesterday’s International Coworking Day. The original coworking space, Spiral Muse in San Francsico, offered five to eight desks two days a week, along with shared lunches, meditation breaks, massages, bike tours, and a strict closing time of 5.45pm. Today there are over 880 coworking spaces worldwide, but what they offer is a bit different from that first location. Today Deskmag looks at what services you can expect to find in the contemporary coworking space.
By Carsten Foertsch - Wednesday, 10 August 2011

Considering the infrastructure only, the most standard feature of a coworking space is, unsurprisingly, still wireless internet, which is found in 97% of all spaces. More interesting is that most coworking spaces now allow greater and more flexible access than that original coworking location. Opening times have broadened out from traditional office hours, to around the clock and calendar, with 55% of spaces offering 24/7 access.

Obtaining 24/7 access usually comes with a surcharge at most coworking spaces. Even if users don’t come in to work at odd hours, they like the ability to do so – in fact, it is one of the most important desires of the average coworker, next to interaction with others. Despite this, 45% of coworking spaces continue to close by 6pm or 7pm.

The figures come from an analysis of data on our sister site, Deskwanted, which lists the majority of coworking spaces in the world. The data also shows that the average coworking space now offers an average of 28 desks.

Despite all the talk about “paperless offices”, the concept remains a futuristic pipe dream. Only one in twelve coworking spaces do not have a printer or photocopier. A meeting room for private talks is almost a standard feature (83%), as is the provision of coffee, tea and drinks facilities (82%).

Coworking spaces show that traditional office equipment such as faxes and fixed-line telephones are indeed old fashioned – only 51% of spaces have a fax, and 40% have telephones. Coworking spaces are also quite healthy workplaces; every second coworking space declares their workroom to be non-smoking.

The implementation of the Coworking Visa and similar member-swap systems are still growing, with now one in four spaces participating in some form of visa program. Some more spaces also offer visitors the ability to drop in for free to test out the workspace (28%). (Another note from coworking history, the first space Spiral Muse offered the first three days for free, to introduce to the unknown concept).

The data contains further interesting statistics. Can you bring your child to your coworking space? Only one in eleven coworking spaces allow you to, and only 2% have an extra childcare facility. Dogs have it a little easier; 11% of coworking spaces welcome – or at least tolerate – canines as guests.

And what happened to those small common bike tours and shared lunches? There are some things which you don't need to list upfront, but rather offer to your members and comrades in person.

Unlike the Global Coworking Survey, this information is not provided by coworkers, but by the spaces themselves. A comparison of comparable features of the two data sets show that coworking spaces do indeed offer the services that the majority of coworkers demand. That means coworking spaces are doing a good job to keep their users happy.

For this study Deskmag analysed the data available on its sister site Deskwanted. Only data from coworking spaces was considered; not data from private offices and business centers.