2021 Coworking Forecast: The 'Next Normal' Outlook

The 'Old Normal' at Dogpatch Labs in Dublin
When forecasts have a high degree of uncertainty, they should include multiple predictions with varying conditions. So we simply asked coworking spaces what they expect for 2021 with and without hard coronavirus restrictions. In this outlook, find out what would change compared to pre-Corona times if normality were to return in the second quarter of 2021.
By Carsten Foertsch - Tuesday, 05 January 2021

Imagine if the most negative effects of the pandemic ended about a year after its first peak. People could hug each other again and would no longer need to wear masks. Large events could be attended, and travel restrictions would be a thing of the past. Wide availability and use of successful vaccinations and rapid testing could make this dream come true.

Number of coworking spaces on the rise

In this optimistic scenario, the overwhelming majority of coworking spaces expect there to be an increased number of… coworking spaces! This trend would be particularly prominent outside of large cities.

The coronavirus pandemic reduced global travel in 2020 at an unprecedented scale. So unprecedented, the resulting tears of joy at Fridays for Future alone could raise sea levels by several meters. But will the pandemic reduce the need to travel even once it’s over?

For people working for coworking spaces, it depends on the purpose of that travel. Two thirds of respondents expect an increased number of digital nomads compared to before the pandemic; half expect more demand for workations.

Why? Probably because such trips enable experiences and adventures that people cannot reproduce online. And the demand for them would increase during their long absence.

On the other hand, business trips will occur less frequently than pre-Covid. Many of them can probably still be replaced by online meetings.

Which images of 2020 became iconic? Given the suffering caused by Covid-19, it may seem devoid of empathy, but one showed Anna Wintour of Vogue magazine sitting in front of her laptop at home in her sweatpants!

The fashion critic sporting a baggy look symbolized the remote work infrastructures that moved into the mainstream during the pandemic, and precisely in the areas where they used to meet considerable resistance, as in the case with sweatpants.

Neither working from home nor the technologies underpinning it were new. However, the newly expanded structures significantly weakened the demand for traditional office space, even during the lockdown-free period.

However, due to the fact that commercial leases often run for several years and government aid, where it existed, initially prevented their termination, the actual effects have not yet been fully captured. 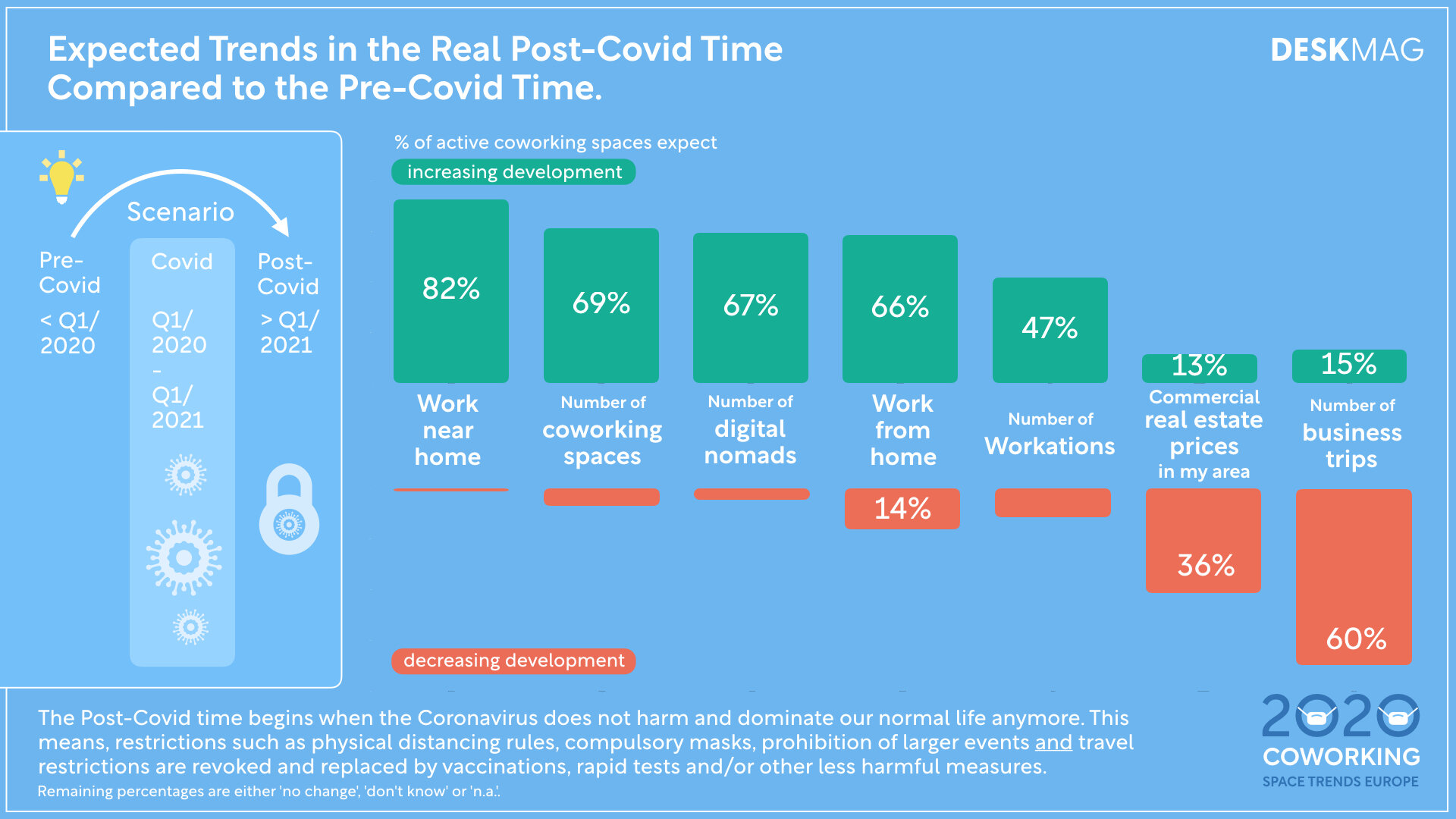 According to most coworking spaces, working from home will continue to be common after the pandemic ends. Coworking spaces outside the major centers in particular expect this.

Before the pandemic, most new members of coworking spaces made the transition from their home offices. Why should this be any different once the pandemic is over? The demand for a sociable but productive working atmosphere is likely to be higher than ever after months of unwanted isolation and distractions.

Coworking spaces expect prices for commercial real estate to fall as a result of the continuing trend towards remote work, especially in medium-sized cities.

Surprisingly, the trend in megacities is less clear. One third expect (rental) prices to fall, whereas one fifth predict they will rise.

In general, cheap loans and interest rates continue to support property prices. The demand for real estates as objects of speculations can therefore eclipse the demand of those who actually want to use them.

A corresponding development has been seen in recent years with an increasingly number of expensive but unoccupied flats in major cities. It's possible that some coworking spaces can expect a similar trend in vacant commercial properties after the pandemic.

Download the complete report with all results of the Coworking Survey Europe. A shorter but less detailed version can be found here.

All Results of the 2020 Coworking Survey Europe

The results shown in this article are based on the responses from 101 active coworking spaces in Europe and some results on all of the 150 participants from Europe. More information about the survey's background can be found in the PDF report with the detailed results.