'Opening party' of Vank Coworx in Rothenburg, Switzerland
When forecasts have a high degree of uncertainty, they should make predictions with varying conditions. So we asked coworking spaces what they expect for 2021 with and without hard coronavirus restrictions. In this article, you will find out what would happen if there were ongoing lockdowns without total curfews.
By Carsten Foertsch - Tuesday, 05 January 2021

At the end of 2020, coronavirus lockdowns returned to many regions in the northern hemisphere. Although direct closures of coworking spaces have been rare, many governments severely restricted other areas of life and recommended working from home again.

Suppose coworking spaces were confronted with such a situation for another six months, how would they react in terms of their operations?

In this situation, about 60% maintained their previous offering and did not (further) reduce their service level. One in ten coworking spaces are considering expansion as crisis situations often present more favorable takeover opportunities. Just under a tenth would reduce their offering or their space. This measure was mainly chosen by profitable and larger coworking spaces.

Similarly, almost every tenth coworking space would cease or had to terminate operations, particularly those in urbans regions and where the lease is about to expire. By contrast, the same portion of coworking spaces are also more willing to expand.

How long would coworking spaces last through periods of 'moderate' lockdowns?

In another scenario, we looked at how many coworking spaces would survive if income and expenses remained unchanged at lockdown levels for a full twelve months. The short answer is that slightly more than half of coworking spaces would pull through. Conversely, the other half would close within a year in such a situation. 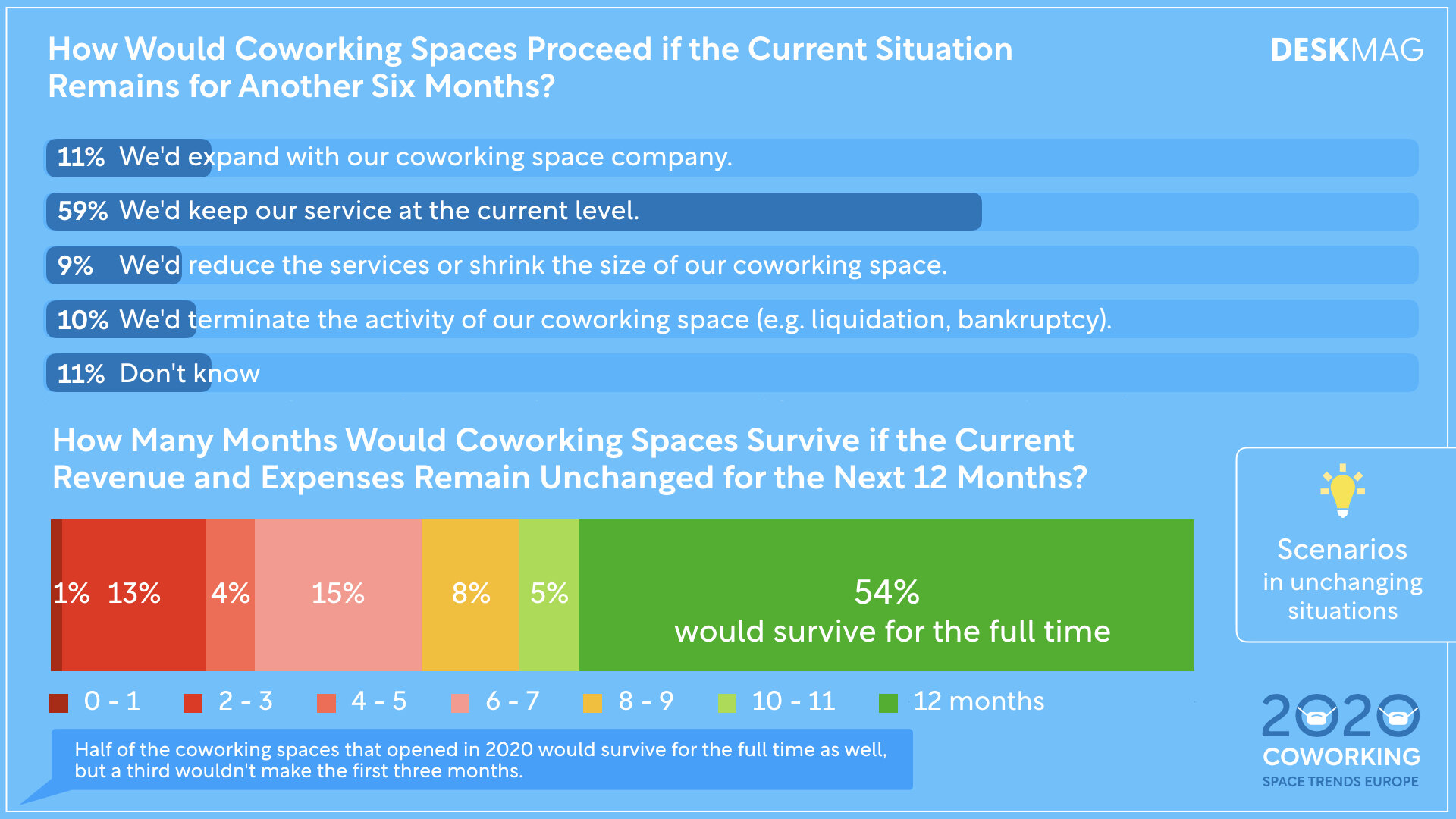 Firstly, very unprofitable locations have probably already exited the market in recent months. Secondly, even before the coronavirus crisis, many non-profitable coworking spaces were often not dependent on profits from coworking for their business model.

Thirdly, for the new (and still unprofitable) coworking spaces, the first year is generally the hardest before they establish themselves. Many still make provisions in case something will happen, even if it's barely for a pandemic. Presumably, this is why every second space would survive these twelve months. A third of newcomers, however, would go under after only three months.

Did governmental aid strengthen coworking spaces to such an extent that they were better off than those that did not receive aid?

No. The aid was mainly given to coworking spaces that actually needed it. Overall, however, their chances of survival look worse. If income and expenses remained the same, almost 60% reported they would have to close in less than a year.

For the spaces that did not receive or apply for government aid, only one in three would have to close within a year. That is, provided there were no restrictions prohibiting work outside the home.

Download the complete report with all results of the Coworking Survey Europe. A shorter but less detailed version can be found here.

Remarks: A lockdown can hardly be called ‘moderate' or 'light' for those directly affected. ‘Moderate' in the article context excludes potential scenarios that are even more severe, unbearable or wide-reaching.

The scenario in this article corresponds to the situation that prevailed in large parts of Europe between the 12th and 24th November 2020. Despite major differences, coworking spaces were mainly not affected by official closures. In theory, members could continue working in them, subject to compliance with distancing and hygiene rules. There was rarely a requirement to wear a mask while working at a desk.

Developments outside of locations are also relevant for coworking spaces, for example, when schools and kindergartens are closed, or companies recommend working from home again to their employees. These measures were not directly considered in the survey. However, they also result in declining usage of coworking spaces.

Many countries in Europe have tightened their lockdowns at the beginning of 2021. The economic impacts on closed coworking spaces would likely to be even more negative than in the scenario presented here - if no sufficient relief were to be provided.

2021 Coworking Forecast: The 'Next Normal' Scenario

All Results of the Coworking Survey Europe: How the Pandemic Is Affecting Coworking Spaces

The results shown in this article are based on the responses from 101 active coworking spaces in Europe. More information about the survey's background can be found in the PDF report with the detailed results.