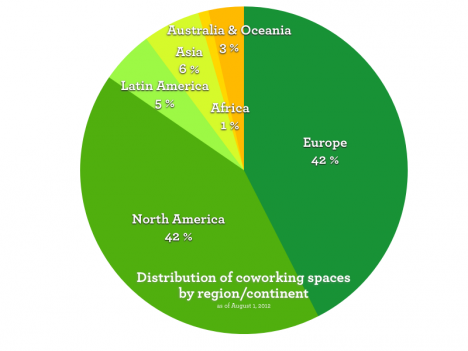 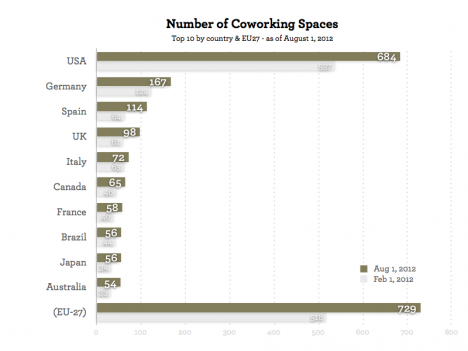 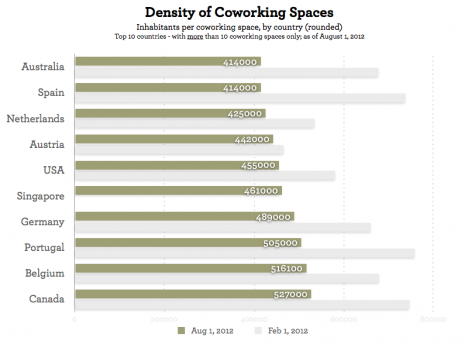 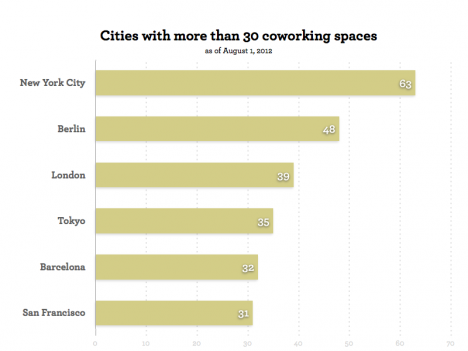 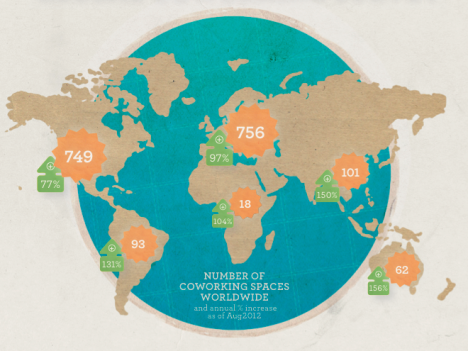 Seven years ago, the first coworking space, at a fragile one-day old, was officially referred to for the first time as a ‘coworking space’. 2,557 days later, the global count of coworking spaces stands at 1,779. This number almost doubled since last year, with much of the growth attributed to Spain, Australia and Japan. Europe has also officially taken over the US as having the most coworking spaces, though the US remains the destination with the most coworkers, since US spaces are on average almost twice as large by european standards, and so have more members.
By Carsten Foertsch - Wednesday, 08 August 2012

„This week is the first week of coworking, something I am setting up“, wrote Brad Neuberg in San Francisco about the opening of the first ‘coworking space’ at Spiral Muse: a social wellness and women's network center. The space offered up to eight desks, common lunches, meditation, massages and cycling. By 6pm their work-life balance was rewarded and sent back home.

Sadly, it was not successful, and the project fizzled out after a year. But the idea of joint, and flexible, workspaces for people who didn’t want to work at home alone lived on. It did not emerge in a vacuum in San Francisco, but rather independently from one another in many parts of the world where freelancers and small businesses were tired of their isolated work situation. However, Brad Neuberg's documentation of his initiative at Spiral Muse is how the coworking movement got its name.

Coworking Spaces rarely offer only workspace. As Spiral Muse, they relied on a collaborative atmosphere, which supported members while they worked. In addition to tables, chairs and the internet, there were events, workshops, and sometimes even massages. Individual and flexible adaptation according to the needs of the members is commonly viewed in these workspaces. Few coworking spaces are alike.

The more wonderful and personalized for its members, the more difficult they are to count. We checked more than 2,200 websites that showcase their coworking spaces. Cafés open coworking spaces, incubators set up coworking areas. Companies share premises with freelancers. These are phenomenal developments which we welcome and encourage. For statistical reasons however, we only count, as always, the spaces that offer open work areas and identify that as their core business. We also only considered spaces which offer short-term membership contracts (compared to yearly or longer contracts), because only they provide the basis for a voluntary, long-term community.

In addition to the data from our sister site Deskwanted, we also use all other channels that facilitate accurate counting of newly opened and closed coworking spaces.

We counted 1779 coworking spaces, 93% more than last year. Nearly 700 of them are in the U.S., and just over 700 in the EU. Within the European Union, Germany is leading the count with with 167 spaces. Spain and Great Britain had the strongest growth, with their counts standing at 114 and 98 spaces respectively.

When comparing continents, North America and Europe are on par. Combined, they account for 85% of coworking spaces worldwide. Relatively, however, the greatest increases were seen in Asia, Latin America and Oceania. In these regions, the biggest increase in numbers were found in Australia, Japan and Brazil.

The development has an effect on the density. Most coworking spaces per capita are now Spain and Australia. Interestingly, there are 10 countries which have at least half a million inhabitants to a coworking space.

We could count only numbers of spaces; the size of each spaces are not considered in this evaluation. The Global Coworking Survey results indicate however that the US would top the list of desks per inhabitants.

Singapore was new in the top ten countries with the most spaces per capita. The city-state now counts more than ten coworking spaces, with about five million inhabitants.

New York, London and Berlin are the global coworking hot-spots

When comparing cities, however, results would be different. For those looking for a coworking space in New York, for example, have 63 to choose from. Berlin follows with 48 coworking spaces. Along with London, Tokyo, Barcelona and San Francisco, these are the six cities that which are home to more than 30 coworking spaces.

The growth has weakened in the last half-year because...

In the survey, we calculated the growth in one year (since August 2011) and within the last six months (since February 2012). The growth in the last six months, when compared to growth rates for the whole year, is much smaller. The reason is simply explained. Spring (in the northern hemisphere) leads to a surge of new coworking spaces. Most newcomers, however, open generally in September, October and January.

As always, the numbers can't say anything specific about the individual coworking spaces, but you will have, however, a higher probability of finding a coworking space in the neighborhood which you like.

In light of International Coworking Day, Deskmag is giving away a downloadable Booklet (8MB!!) with summarized results of the 2nd Global Coworking Survey, to give all coworking enthusiasts out there some numbers to celebrate with! Happy Coworking Day, everyone!