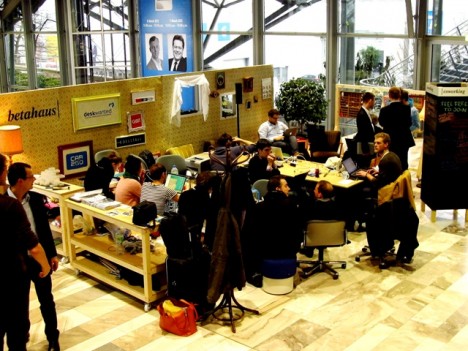 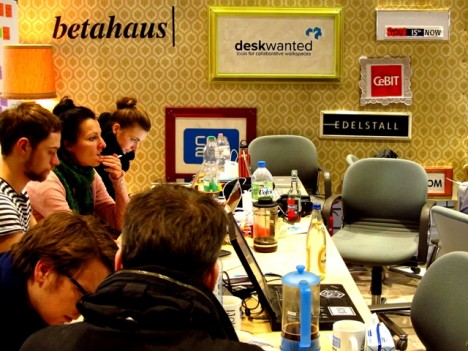 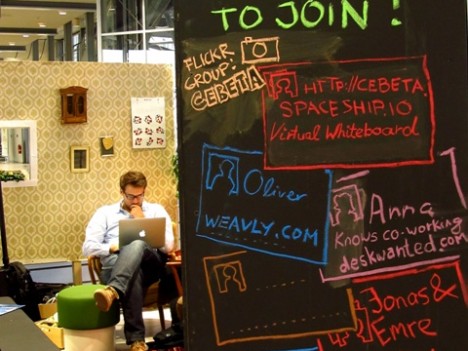 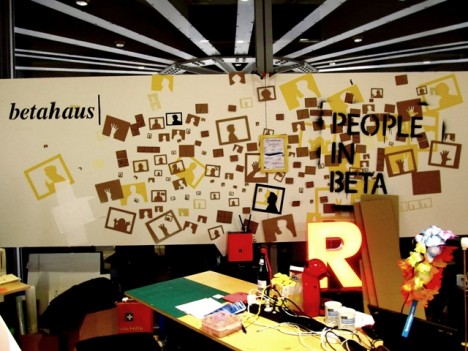 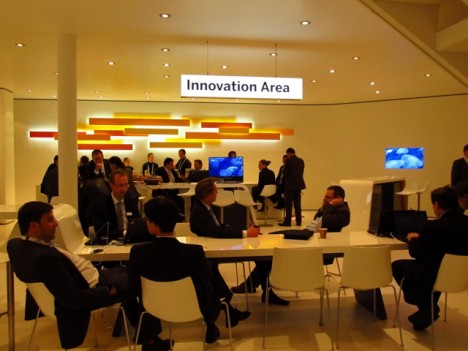 While hundreds of coworking enthusiasts gathered together in Austin last week at the Global Coworking Unconference Conference to discuss all things familiar, another intrepid group of coworking missionaries entered unchartered territory. This year, a faction of the German coworking movement visited CeBIT in Hannover, the biggest consumer technology fair in Europe. The overall ambience of CeBIT is forged around corporate industry professionals, traditional office aesthetics (with a healthy dose of LED light panels) and an overarching principle of competition: the antitheses of the average coworking space.
By Anna Cashman - Tuesday, 13 March 2012

CeBIT is Europe’s biggest consumer technology fair. Over 5 days and across 26 halls, big-name businesses, middle players and startup companies showcased their products, drawing crowds in their hundreds of thousands. The expo, held in the Hannover Fair Grounds, usually attracts a certain attendee: buyers, distributers and company representatives, suited and corporate.

This year, though, something new was thrown into the mix. In light of the eruption of the worldwide coworking movement, betahaus, a Berlin coworking space, was invited to set up a stand and introduce the concept of collaborative workspace to the corporate world. Supported by Deskwanted and a number of other partners, betahaus and its resident workshop space Open Design City recreated their facilities in the foyer of the Conference Center, home to the global conferences of the event.

It was a unique opportunity to spread the philosophy of openness and cooperation to representatives of companies with closed-house policies, and, initially, it was met with some resistance. Unaccustomed to the aesthetic, the casually dressed professionals, and the drone of a laser cutter and 3D printer in the background, there was an initial sense of confusion felt by the suited businessmen passing by. Following short explanations though, interest began to swell.

The philosophy of coworking was inserted into a context familiar to companies and corporations. Questions such as ‘how is coworking and collaborative workspace already being adopted by big-brand businesses?’ and ‘what is the growth rate of the movement?’ were addressed, and led to further exploration of why coworking and collaborative working has become so popular, and why some companies are already jumping on board. Deskwanted and Deskmag’s statistics, drawn from the Global Coworking Survey, helped show the concrete benefits of coworking spaces, as well as the movement's insatiable growth rate. It was the bridge of understanding between two worlds.

The betahaus coworking space acted as a refuge for many who had become weary of navigating the enormous, product-filled halls. It became known as a place to regroup, to socialise, and of course, to work comfortably.

It was also used as an area to discuss and debate. The ‘Arena’ space, complete with two-tier stadium-style seating, hosted a number of presentations by startups, workshops for existing and original ideas, and provided a space for some of the conference’s keynote speakers – representatives from companies like Google, Forbes and Intel – to have intimate Q&A sessions.

A number of other activities were also migrated from betahaus and ODC. Each day kicked off with a ‘betabreakfast’, allowing newcomers to break bread and share their projects and plans with the group. It set the tone for a day of involvement and the exchange of ideas, continuing through to the afternoons when a betapitch was held, allowing startups to pitch their projects to an expert panel.

There were a number of collaborators who combined to make the space powerful and interesting. Thanks to EDELSTALL, a local coworking space in Hannover, a number of its resident startups visited the space to present their ideas and partake in the activities, contributing to the diverse nature of the group and the richness of connections made over the course of the week.

The team from Dundu brought their 5 meter puppet to demonstrate principles of teambuilding and the importance of communication. Protonet previewed their social infrastructure allowing enterprises to control their own secure, private cloud, except that during CeBIT, everyone was invited. Seed Lounge, a start-up funding initiative, hosted the daily betapitches, inviting judges from global companies - like IBM, for instance - to offer constructive feedback on new ideas. Common to all of the presentations and activities were the principles of inclusion, collaboration and openness: projects were perfected and new ones imagined within the community.

Ultimately, it was this diversity of people, the synergy of the group, that spurred interest. The coworking movement, and what it stands for, was exposed to individuals and companies who had never before heard the word, but who now know that coworking spaces are the new and most productive workspace, that they are hubs of boundless talent and concentrations of freelancers and independent workers. Many more now know the force of the movement, where it’s headed, and why it came to be. CeBIT 2012 gave both parties the chance to experience something new and different, and for this, it was a great success.