The Growth of 'Coworking' on Google & Wikipedia 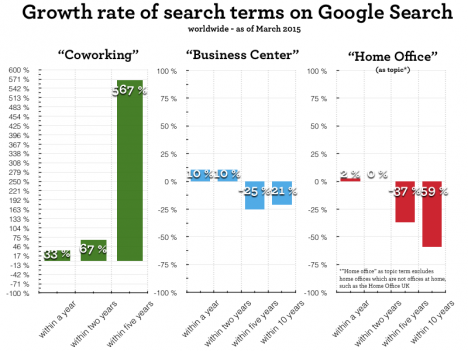 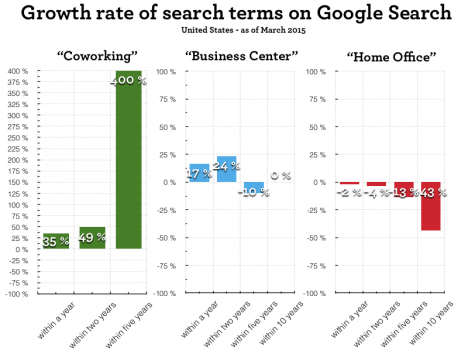 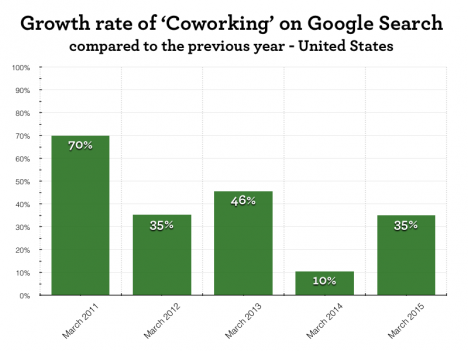 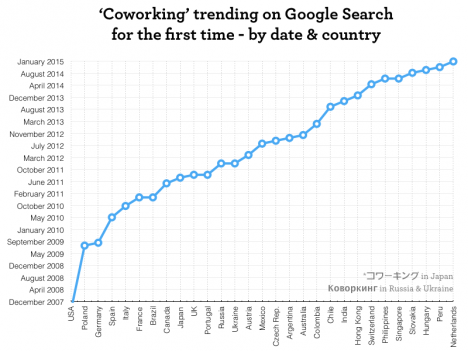 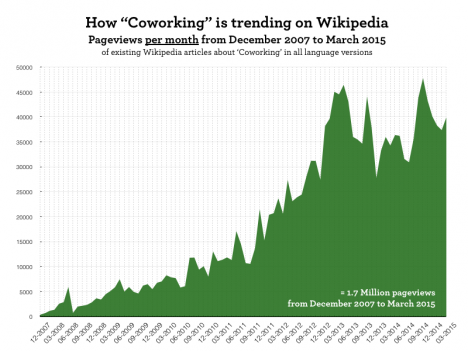 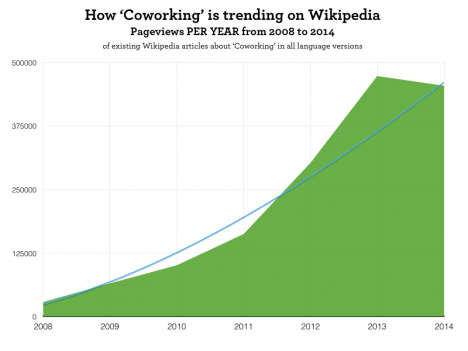 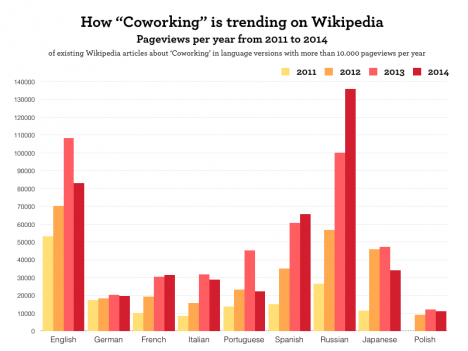 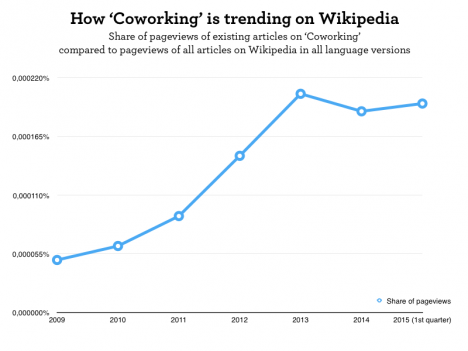 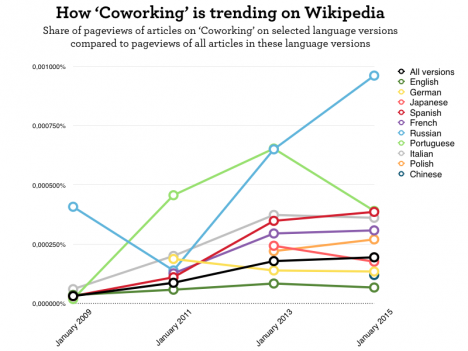 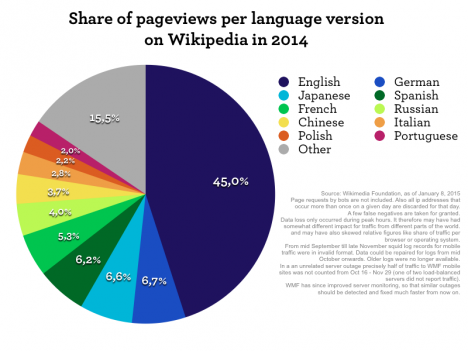 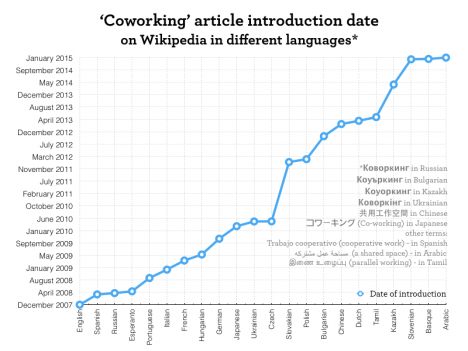 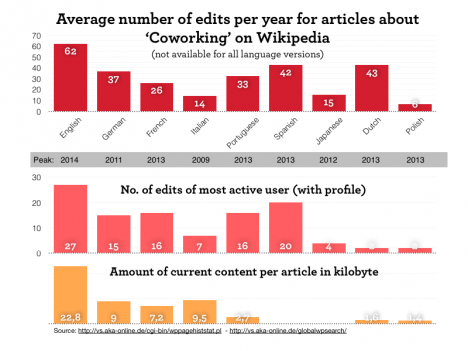 Where and how often do people search online for 'Coworking'? Do they write it with or without a hyphen? Has the new style of work affected the popularity of 'home offices'? Google and Wikipedia offer daily data about their search volumes and requests. Deskmag worked its way through this data and extracted some answers about these and other questions. The first answer shouldn't surprise you: 'Coworking' is still growing.
By Carsten Foertsch - Friday, 01 May 2015

The worldwide searches for the term 'Coworking' on Google have reached their current peak this March. This figure has climbed by 35% in comparison to the same month in the previous year - and by around 60% compared to two years ago. When looking back at the last five years, the search volume for 'Coworking' has increased sixfold in comparison to other queries.

The trends enable a general glimpse into the development of the coworking market. Where and how frequently is 'Coworking' searched for on Google and how often are articles requested about 'Coworking' on Wikipedia? You can find out more about the origin and significance of the data at the end of this article. For the individual trends for each country, please click on the picture gallery.

The research for this article was supported by GCUC, the Global Coworking Unconference Conference

The demand for 'Coworking' has climbed in the last twelve months, especially in Canada, Italy, France, Thailand, Australia, and India. A stable upward trajectory can likewise be seen in the USA, Brazil, and Spain, along with fluctuations in Mexico and Japan.

On the other hand, the trend has stagnated in other countries. In Poland and Russia, the figures have maintained the same level as three years ago. In Germany and Argentina, it reached the current trend level two years ago; and in Great Britain, one year ago.

Nevertheless, the peak has crested in nearly all recorded countries over the last three months, meaning that never before have so many people searched for 'Coworking' on Google. Some exceptions are Russia, Mexico, and Argentina, which reached their peak in the last quarter of 2014. A real slump can’t be found anywhere on Google Search. However, no data is available for other countries besides those listed in this article.

Italy, the Ukraine, and Belgium have caught up compared with other countries in the last two years. Spain is ranked at the top ahead of Russia, Italy, and the Ukraine. Japan slid two places lower to the fifth place, and Brazil likewise fell to the sixth place. The data doesn't show to what extent the Russia-Ukraine conflict and the economical crisis has impacted coworking spaces in Russia and the Ukraine.

The relative hotspots in the last two years are Barcelona and Moscow. The Brazilian cities of Porto Alegre and Curitiba have moved down the trend list. Milan and Turin are rising to the top.

Looking back at the last 12 rather than 24 months, all Brazilian cities have left the list of hotspots. Therefore, more cities from the USA have come back onto the list again. The number of search requests for “coworking” in Brazilian cities in short timeframes is probably still too low, which is why they were not considered in this comparison. In other words, in the US, more people search for 'Coworking' in absolute terms. Please click on the picture gallery to discover more about the individual countries.

Japan is ahead of the US, Thailand and Germany regarding “coworking space”

In the last two years, “coworking space” was most often searched in Japan, Thailand, the USA, and Germany. Among the cities, Tokyo is leading the list, followed by San Francisco, New York, Bangkok and Berlin. Spain, Russia or Brazil are not represented on the list, probably due to the other ways of writing the term. For each of the linguistic alternatives like “espacio de coworking”, “espaço do coworking”, or 'коворкинг-центра', however, no data is available from Google Trends, as they are (still) too rarely searched for. From our own experience, in some non-English-speaking countries, 'Coworking' is also increasingly used as a synonym for coworking spaces.

'Coworking' is 15x as popular as “Co-working”

'Coworking' is almost 15 times more likely to be searched as its counterpart with the hyphen, “co-working". In the USA, surprisingly, this happens relatively more often than in Great Britain or Australia, where forms of writing with the hyphen are more widespread in general.

And how are the supposed competitors of 'Coworking' trending? Even though more and more people seem to work in the “home office”, this trend doesn’t manifest itself on Google. On the contrary, the requests for this term have been cut in half worldwide (-57%) over the last ten years. In an English-speaking country, like the USA, the same trend presents itself, although it is slightly less pronounced (-43%).

If you only look at the last five years, the trend has slowed worldwide (-39%), and even more in the USA (-13%). In the last two years, generally speaking, it went neither up nor down.

Germany is one of the few countries, in which the term has strongly spiked on the trend barometer, since the German labor party joined the current government in 2013 and promoted this type of workspace. However, the term “Heimbüro” (German for 'home office') has no relevance in Germany, according to Google.

Search terms can carry different meanings depending on the country. In Great Britain, “Home Office” also stands for the Ministry of the Interior. In order to cancel out this effect, Google offers thematic search term parameters, like those taken into account in the findings published here. Without this effect, “home office” became even more unpopular on Google Search.

Despite an intermittent peak five years ago, the queries for “business center” have shrunken over the last ten years by about a fifth. In the last two years, however, more interest in “business center” could be seen again on Google. Alternative terms like “executive office,” by contrast, decreased sharply, or played no part like “serviced office”. For the term “Regus,” the trend barely moved, neither up nor down, over the past ten years.

“Coworking” will pass “Regus” and “business center” in around two years

Another trend therefore shows itself clearly. If you pursue this trend further, in around two years, more people will be searching for the term “coworking” than for “Regus” or “business center.” It must be remarked in all fairness that “coworking space” has currently only reached one tenth of their present search volume. This discovery is interesting, at least for the office market in general.

▶▶ Next page: How 'Coworking' performs on Wikipedia