The differences between work cultures found in eleven countries 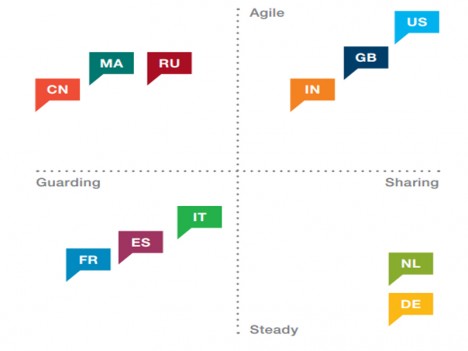 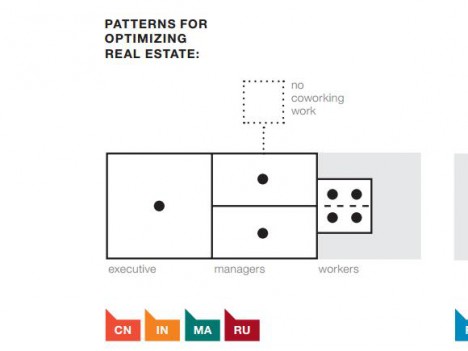 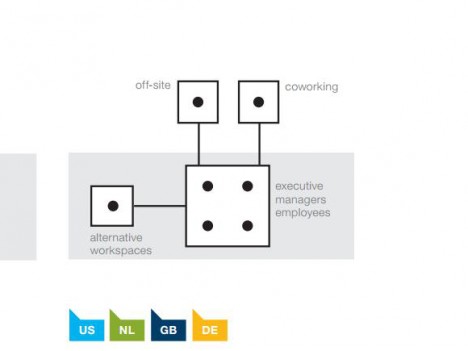 Cultural differences have been a major challenge for many workspaces, especially those that are welcoming a variety of different nationalities. An American employee would probably remain skeptical at first, and wait to see how much time his French coworker dedicates to a lunch break. An Italian worker may be put off by the long silence of their Japanese teammate. We all work differently and our professional expectations, as well as our cultural values, highly influence the way our workspace is designed. In a new issue of the research paper 360°, titled “Culture Code”, Steelcase has addressed these challenges by mapping the different work cultures found in 11 different countries.
By Rémy Cagnol - Friday, 22 March 2013

Steelcase has studied 100 workspaces in China, France, Germany, Great Britain, India, Italy, Morocco, Spain, Russia, Netherlands and the US. The applied methodology, used for cultural mapping, is based on the work of sociologists Geert Hofstede and Edward T. Hall, who focus on cross-cultural communication in organisations.

Thus, it observes the notion of hierarchy, collaboration and mobility, and the different ways that it can manifest, according to cultural values. The notes taken during this study, amongst others, show that coworking and “alternative workspaces” should also take cultural differences into consideration.

It is quite hard to analyze and compare work cultures without making clichés or generalizations, which are typically based on our own social rules and conception of professional expectations. Thus, this study shows that organizations and cultures could be analyzed according to several dimensions. Inspired by the work of Geert Hofstede and Edward T. Hall, Steelcase has retained these 6 examples:

1)The power distance index or pdi, which assess the distribution of hierarchy, from autocratic to consultative.
2) Individualism & Collectivism
3) Masculine & feminine dimensions, where “masculine” cultures tend to be more competitive and performance oriented, and “feminine” examples tend to be more focused on relationships and collaboration.
4) The uncertainty tolerance
5) A Long-term or short-term orientation
6) A Low or High Context, which considers the importance of unspoken rules in a cultural context. For example, “low context” cultures would rather promote explicit information among individuals.

Some other factors could also be taken into account, such as the population density tolerance, or the real estate costs. Nevertheless, the separation between private and professional life, and the way individuals collaborate based on the importance of hierarchy, seems to be the most determinant value when considering the design.

One must also note how companies could redesign the workspace according to the three values of hierarchy, as well as the collaboration and mobility that coworking culture is known for. The importance of hierarchy determines, not only the workspace design, but also the distance between employees and managers in offices.

In the Netherlands, as hierarchy often works in the same workspace as the employees, a space for collaboration would be accessible from the entrance, and the manager/executive office would most likely be pushed further into the space. This is a pattern that would be totally inverted when observing work trends in Russian culture for example.

Theses collaborative spaces should then be judiciously placed, in order to enhance collaboration in “masculine” cultures,  which are more competitive in comparison to “feminine” cultures. Thus, in the case of Germany, considered in the study to be one of the most “competitive” culture in Europe, Steelcase proposed that a collaborative space should be placed in the crossroads of the workspace, as a way to encourage a crossdisciplinarily environment.

Finally, even if the current trend would seem to be focused on workers flexibility, it could be noted that the so called “nomadic spaces” are only proposed in some countries such as Germany, Netherlands and the US, where mobility seems to be more accepted.

▶ Next page: check the values fostering the adoption of teleworking