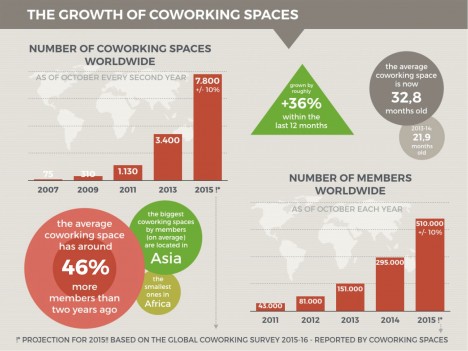 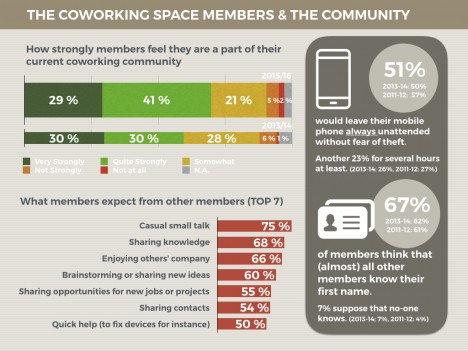 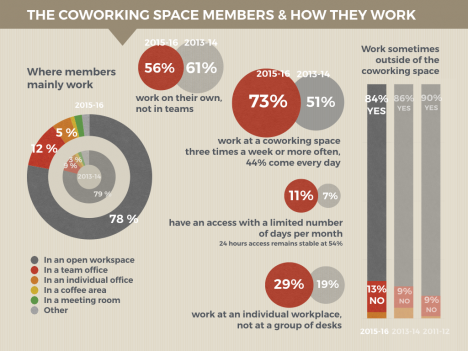 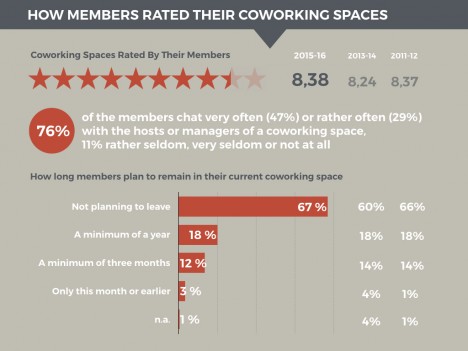 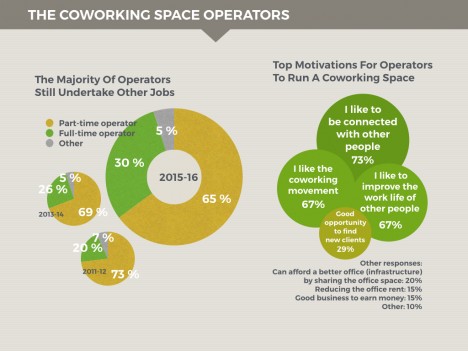 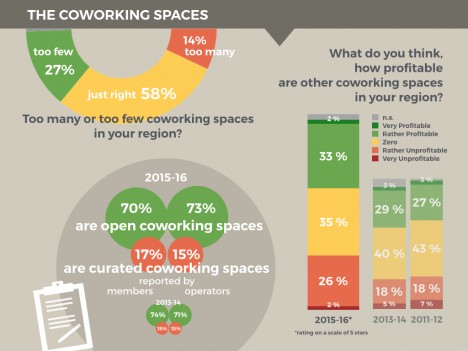 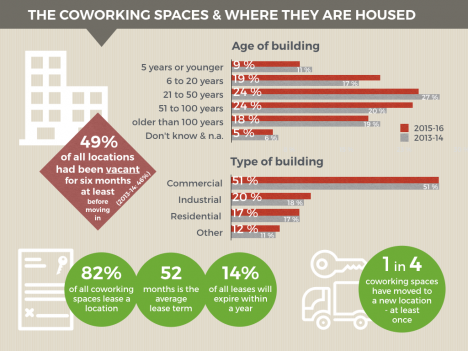 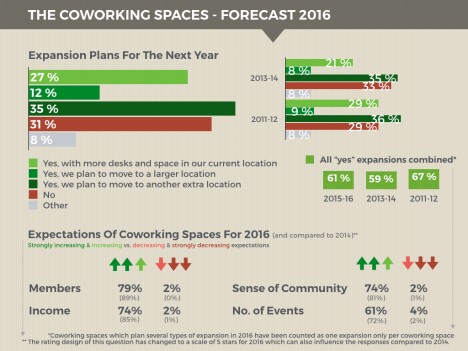 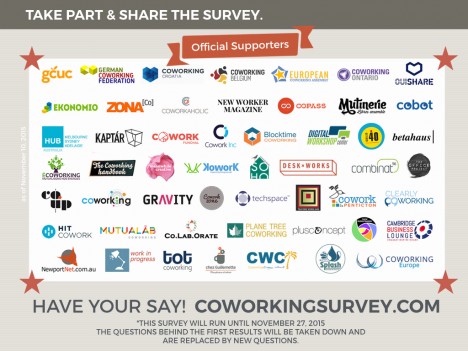 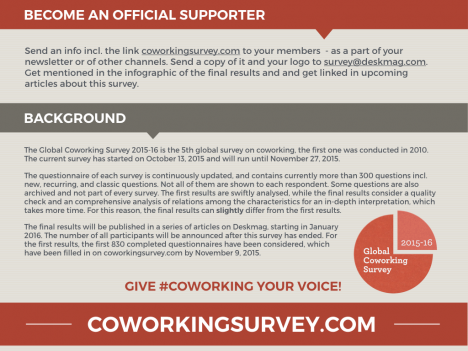 During the annual Coworking Europe Conference in Milan, the first round of results taken from the most recent Global Coworking Survey were presented to eager attendees. The number of coworking spaces continues to increase and in the last twelve months they have grown by 49%, which puts the number of coworking spaces worldwide at around 8,700. The coworking movement is undeniably here to stay. The survey showed that current spaces serve, on average, 46% members than they did just two years ago. Today, about half a million people are working in coworking spaces. Yet, surprisingly, the increase in members has not led to a more isolated work environment.
By Carsten Foertsch - Friday, 13 November 2015

The number of coworking spaces is growing worldwide. However, the market for them does not seem to be oversaturated. The question of whether there are already too many coworking spaces was denied by almost 85% of space operators within their region. Slightly more than one in four believe that there is room for similar spaces concerning coworking, and were open to more competitors joining their market. On the contrary, the survey found that only 14% of participants believed that coworking spaces already oversaturated the supply for their region.

Yet, how many coworking spaces exist worldwide? The question is one of the most popular questions within the coworking movement and it's been usually a tradition to present an updated number with the first results of this survey. However, the more coworking spaces exist, the longer it takes to count them. New spaces pop up, while at the same time others close. Some are branded as a coworking space without being one, some market themselves as “more than just a coworking space", and others change their concept over time. Therefore, a census evaluating the amount of spaces has to start from scratch and is usually manually counted, which takes more time.

However, the most recent Global Coworking Survey allows an overview of how many coworking spaces there have been in certain periods of the movement compared to when they emerged. In the last twelve months, 49% of new coworking spaces have been added to the already pre-existing ones. The days of spaces doubling annually seems to belong to the past, as rapid development is no longer on the rise.

Yet, absolute growth within the movement is still impressive and is also significantly higher than the rates found within other industries. Starting from the last - conservative – counting, we see the current growth at an estimated 8,700 coworking spaces worldwide. However, certain variations in the development of spaces should be considered when counting. Coworking spaces themselves have grown.

The survey found that spaces currently manage, on average, nearly one-third more members than they did during the last Global Coworking Survey conducted two years ago. Based on these two developments, growth rate of coworking spaces and an increase in average number of members, we see that there are a little more than half a million people in coworking spaces today. To calculate this result we did not take the amount of coworking spaces and multiply them by the average number of members, but instead calculated this by the growth of individual groups of spaces that were collected and only then added and reported in absolute terms.

More members per space do not generally mean more anonymity

Coworking spaces with more members do not necessarily provide a more anonymous work atmosphere. On the contrary, spaces with more members feel even more connected (70% instead of 60%) than they reported on the survey two years ago. Only the proportion of members who feel “strongly” connected to their space remained at a consistent 30%. Another number which also remained stable, was the trust between members, at least when it came to leaving valuables unattended. The survey showed that slightly more than half would leave their mobile phones out without fear of theft at any time in their coworking space.

The first and most obvious reason for this is probably the fact that members use their coworking spaces much more frequently and also work more often in teams. Almost three quarters of respondents work at least three days a week in their coworking space. Two years ago it was only every second person. Although more coworking spaces offer additional team and private offices, the vast majority of members (2015-16: 78 %, 2013-14: 79 %) still mainly work in open workspaces. Surprisingly, the proportion of curated coworking spaces remained stable. Only 17 % of all spaces based their memberships on a positive assessment of the applicant, depending on their interests and profession. Approximately 70 % of all coworking spaces are open to all interested parties, which is almost as many as two years ago.

Many operators continue to pursue one or more activities while running a coworking space. However, their share dropped down to 65% (2011-12: 73%). Today, almost one in three operators are full time; four years ago it was only one in five.

Three in four operators run a coworking space in order to be better connected with other people. The majority also want to improve working conditions for other people and to support the coworking movement in general through their work (each 67%). Nearly one third expects to acquire, through their activities as an operator, new customers and projects on the side.