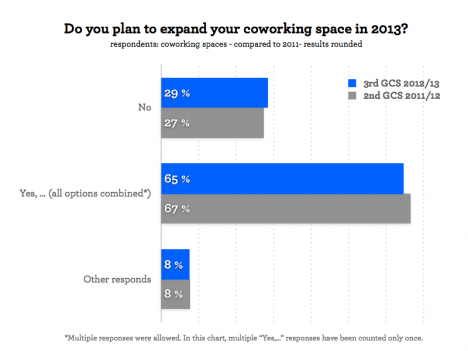 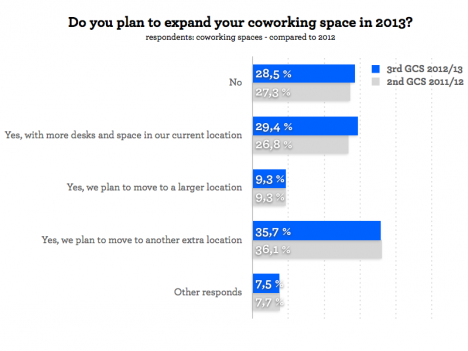 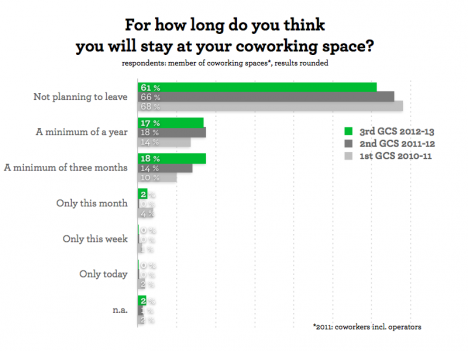 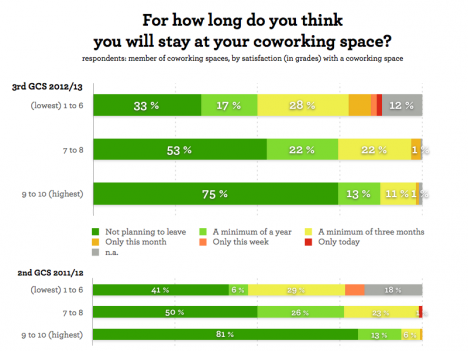 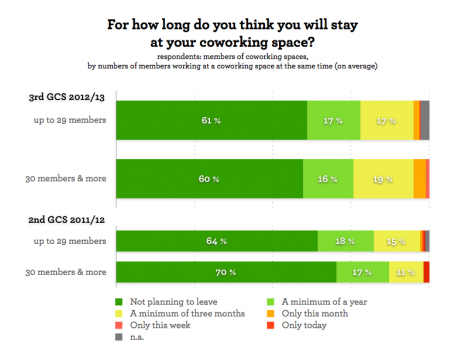 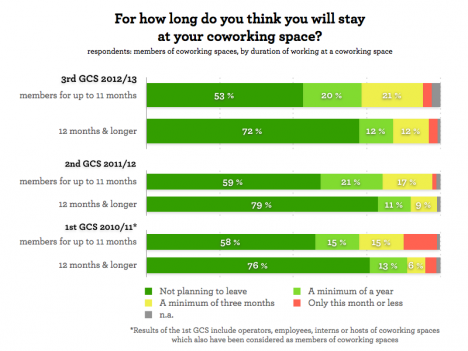 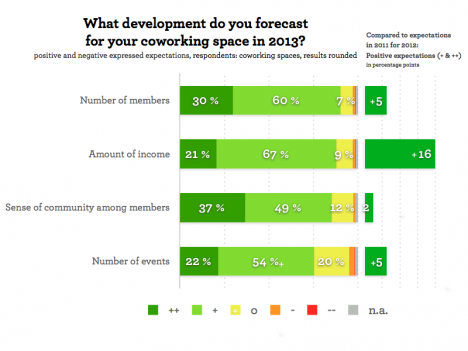 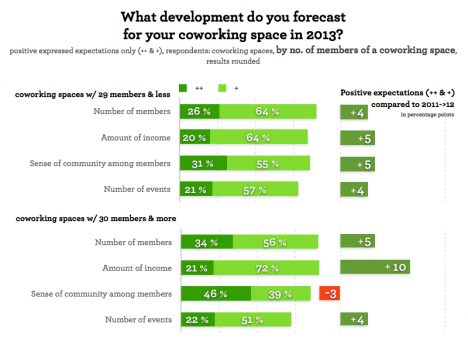 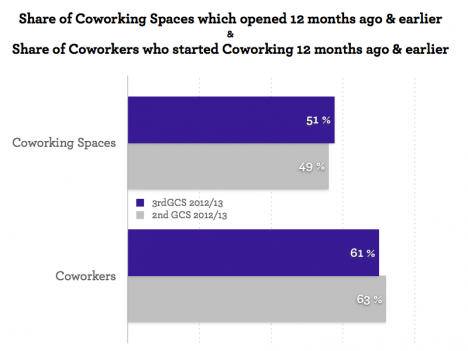 The diversity of the coworking movement is growing, resulting in an higher number and variety of coworking spaces. We see that more members are open to changing their space, so what’s going on with the coworking spaces? Compared to last results, those spaces with many members plan to open more often new locations. The smaller spaces instead focus more often on expansions within their existing location or have plans to move to a bigger one. Furthermore, more competition in this collaborative and new market does not to lead to declining revenues. In fact, 9 out of 10 coworking spaces expect a significant increase in comparison to the previous year.
By CARSTEN FOERTSCH - Friday, 01 February 2013

More members, more events, more of pretty much everything. Most coworking spaces hold a positive outlook for 2013 – and have even more optimistic expectations compared to the results of the 2nd Global Coworking Survey! A particularly strong statistic that sways the opinion of coworkers is that 88% of all coworking spaces expect higher revenues, which is a fifth more than in the previous year. This additional fifth is mainly on the account of mature and bigger coworking spaces. In regards to their positive expectations, when observing revenue and membership growth, they differ less than in the last survey related to younger and smaller coworking spaces.

New coworking spaces continue to expect, on a relative scale, a higher plus in income compared to the more established spaces. This is because in the beginning, they have to host less members. These numbers can be relatively easy to increase when compared to increase in older spaces. The same goes for events and revenue.

Expansion plans for coworking spaces, at first glance, appear to be similar to those from the previous year. In total, two-thirds of coworking spaces plan to expand within their existing spaces, by moving to a bigger location or by opening (a) new location(s). Some spaces have plans for several types of expansions at the same time. But in almost one third of the spaces, everything will remain the same.

According to their size, the results have changed more drastically, when compared to last year. 53% of all large coworking spaces (with 30 members or more) consider opening at least one new location. The year before only 44% of spaces reported that. For small coworking spaces (with 29 members or less) it is just the opposite. Here, the expansion plans fell to 23%. Instead, smaller spaces are about to decide to invest more in their existing workspaces or to move into a bigger location.

Even highly rated coworking spaces have to expect a slightly higher fluctuation this year. 74% of people, who gave their space a 9 or 10 out of 10 points, don’t have any plans to quit their membership. Last year, this result was 7 points higher (81%). In the lowest-rated coworking spaces, the numbers fell from 41% to 33%.

Coworkers may prefer smaller spaces, but the size of a coworking space is not a definitive reason to leave

The reason, that members leave a coworking space, is not only because a space became bigger. In this respect, we couldn’t find any differences. The probability of remaining in a coworking space decreased in both small and big. Coworker’s work habits are in general slightly more flexible than before.

Nevertheless, the vast majority feels very connected to their workspace. 84% of all members who have stayed for at least one year in a coworking space will most likely remain for another whole year (last year: 90%). For coworkers who have joined a space less than a year ago, the share dropped to 73% (previous year: 80%).

The success of most coworking spaces does not affect this particular development, as they alread,y reported to be more optimistic than the year before. Even a review shows good prospects for the future. According to this survey, 51% of all existing coworking spaces opened last year. The number of members increased even more. 61% of all current coworkers started working at a coworking space last year. These results do not differ significantly from the responses that we saw in the second (annual) coworking survey.

We apologize for the delayed publication of these results due to internal restructurings. More articles will follow.