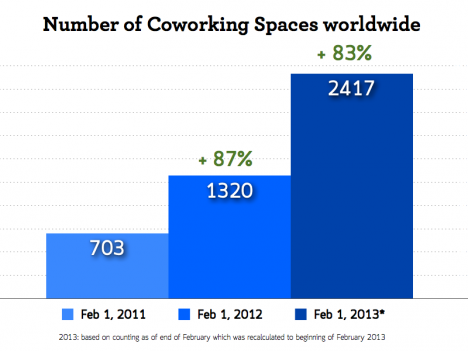 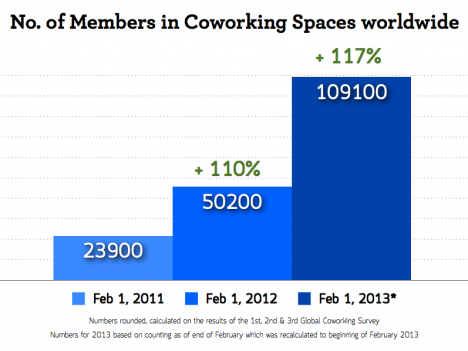 More than 110,000 people currently work in one of the nearly 2,500 coworking spaces available worldwide. Compared to last year, there are now 83% more coworking spaces that serve a total of 117% more members! Considering only workdays, we see 4.5 new coworking spaces have emerged daily for the past twelve months. During the same time, the number of coworking members increased by 245 people on average each work day.
By CARSTEN FOERTSCH - Monday, 04 March 2013

In the last twelve months, three new coworking spaces opened daily. Only taking the workdays into consideration, there was an average of 4.5 new spaces opening per day, offering workspaces for creative people in more then 81 different countries.

Since the absolute number of spaces has continued to grow at a steady increase, the relative growth has become slightly smaller. Compared to last year, it dropped from 87% to 'only' 83%, which is still an incredibly strong development.

And we see that the work spaces have become larger. There was an increase in the number of members of about 117% in the last 12 months, which is even more than a year ago! Overall, about 109,000 people worked as members of coworking spaces, as of February 1st, which was compared to the 50,000 observed in the previous year on the same day. By the end of February 2013, there were already 4,000 more members working in collaborative workspaces.

Most coworking spaces are still in the United States (781), which remains ahead of Germany (230), Spain (199), Great Britain (154) and Japan (129). By continent, the European numbers continue to grow more steadily compared to North Americans. Yet, one must consider that there are also more people living in Europe when compared to the U.S. and Canada.

When looking back to the population count from before, the Spaniards continue to be in the lead of the coworking movement. Cities like London (81) surpassed New York, with Berlin following in third place.

The coworking census this current quarter came a month later than last year, so we counted them twice, starting at the end of February. Then we recalculated these results back to February 1st, in order to compare them with last year's results. We found, starting at the beginning of the month, that there were 1,417 coworking spaces representing a growth of 83% in one year.

For statistical reasons, we only consider working spaces that describe coworking as a principal or an integral part of their business.

The coworking census is normally conducted quarterly in collaboration with Deskwanted. Yet this quarter only the team at Deskwanted compiled this last edition by counting new and closed coworking spaces, so the results may vary slightly in different countries.

As always, the numbers don’t say anything concrete about the quality of the individual coworking spaces. But with the noticeable increase in growth, the likelihood that more people will find coworking spaces that fit their needs and in their own neighborhood, is much greater.