Coffee area at Industrious Boulder. Click on the picture for more stats. 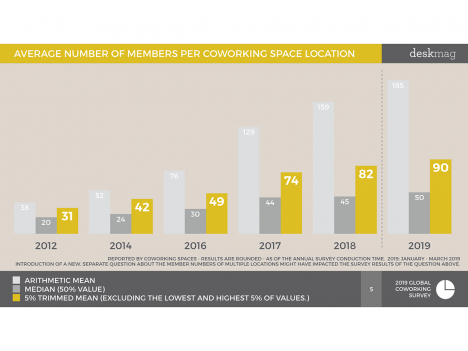 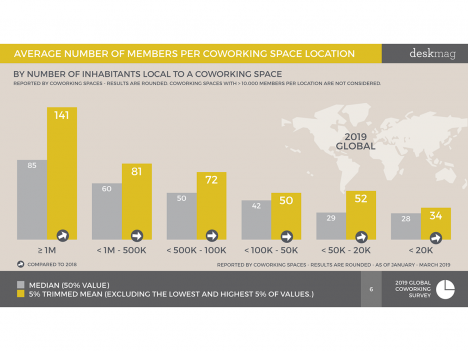 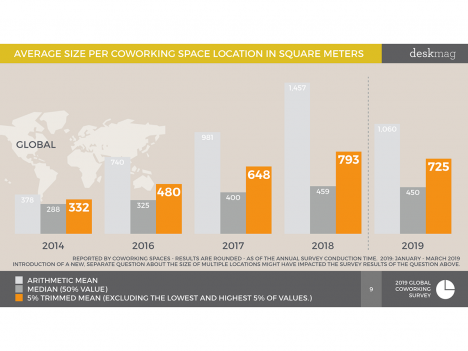 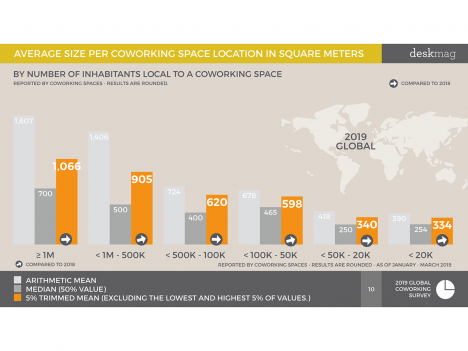 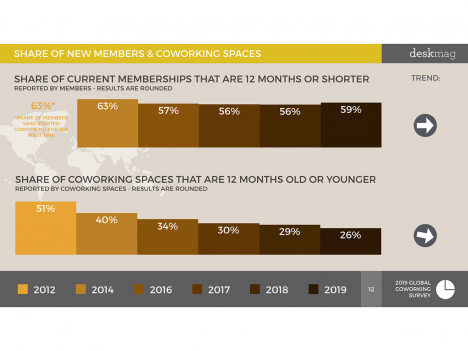 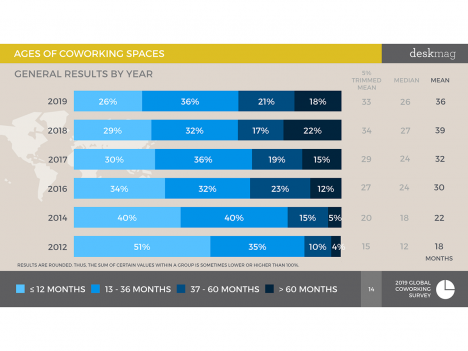 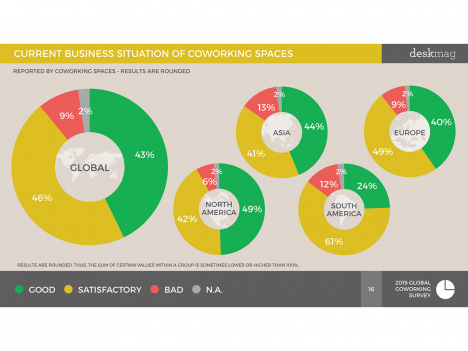 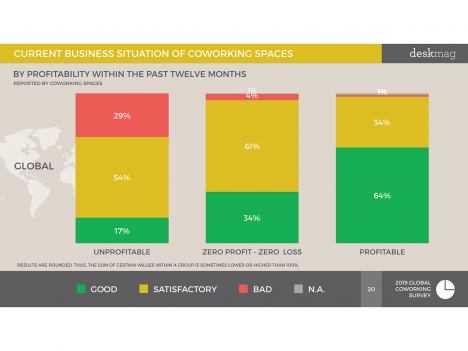 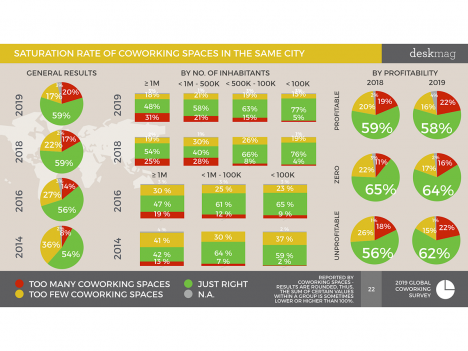 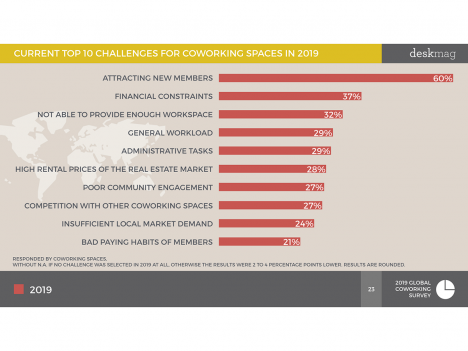 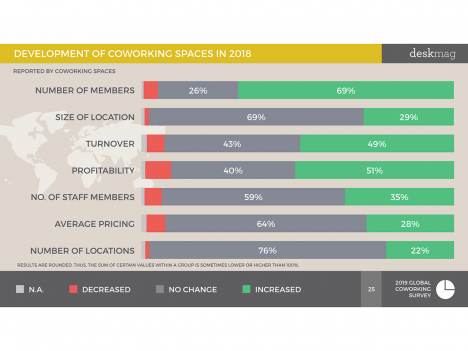 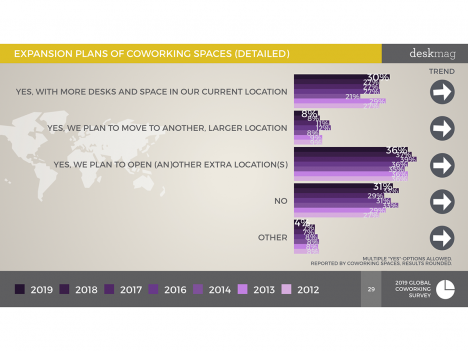 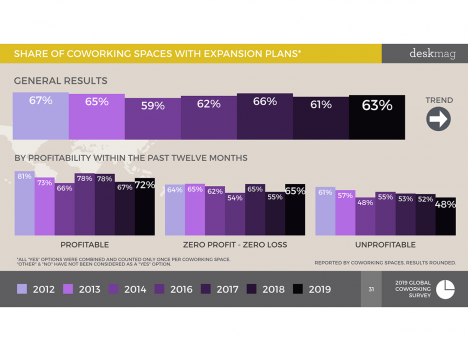 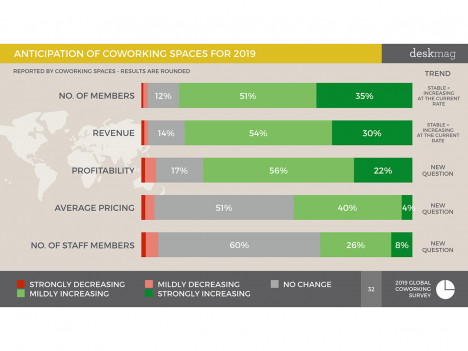 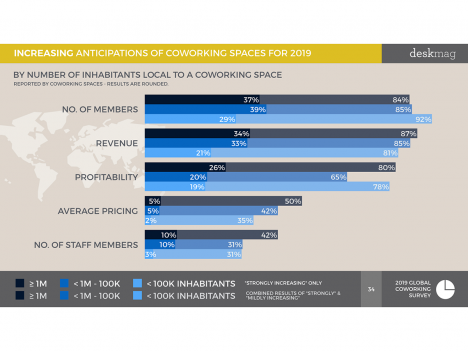 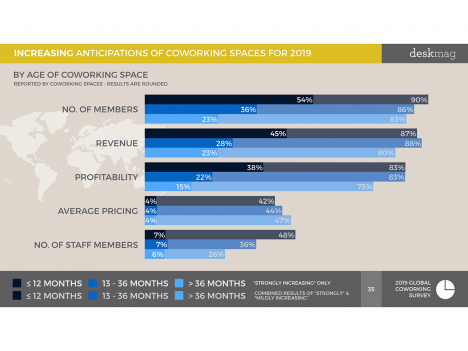 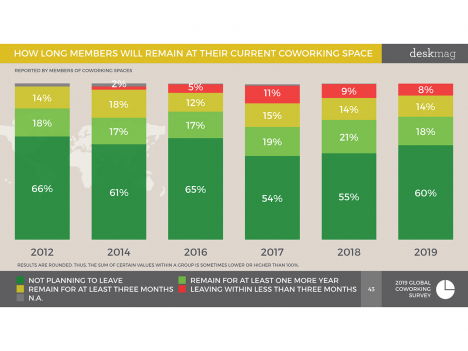 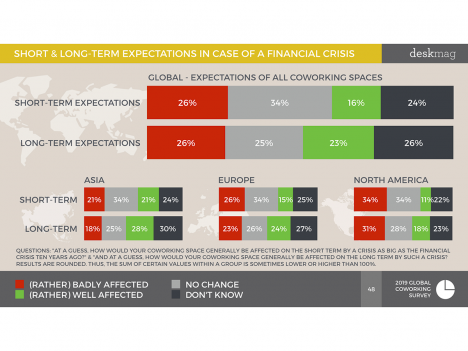 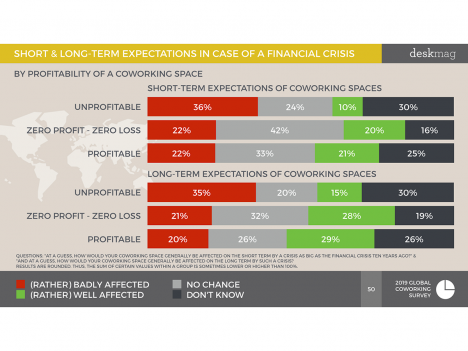 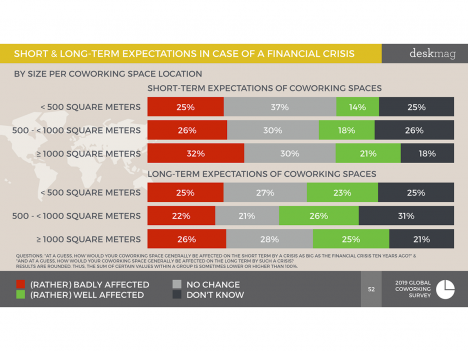 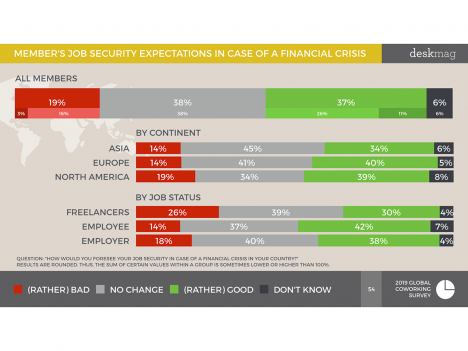 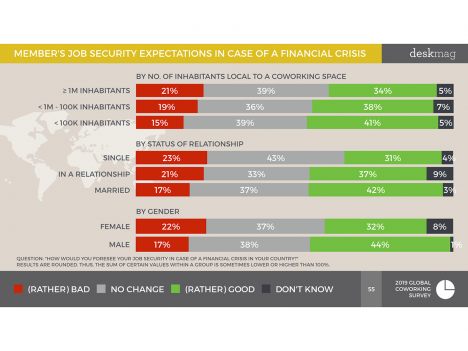 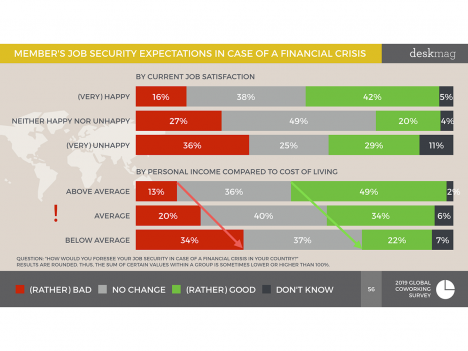 The market for coworking spaces has undergone remarkable growth in the last couple of years and continues to flourish to this day. Locations in megacities, however, seem to have reached the limits regarding their size. And new questions are being asked: what if economic growth slows and a new financial crisis emerges? Who would profit and who would lose? The following numbers summarize the expectations for coworking spaces and their members based on results from the 2019 Global Coworking Survey.
By Carsten Foertsch - Thursday, 23 May 2019

The independent conduction of the 2019 Global Coworking Survey was supported by Nexudus, Essensys & Yardi. Download the free report here.

11% of coworking spaces host now over 300 members, mostly in megacities. When looking at the overall results, however, it should be noted that more coworking space locations are being established in medium and small cities, which brings the average of members per location down, since they have considerably less members.

Since the first Coworking Survey, the area of coworking spaces has grown constantly. However, their average size has shrunk for the first time this year. It has remained stable in megacities, at around 1070 square meters (11,500 sq ft)* per location, despite the higher share of large locations compared to the previous year. In smaller cities, the average size has tended to grow. However, the coworking spaces are much smaller in these regions and, as these smaller spaces increase in relative numbers, the average size for all locations decreases.

Even though the amount of younger coworking spaces is dwindling, the overall age of coworking spaces in 2019 is lower. This contradiction can be explained by the fact that, relatively, more older spaces have left the market than a year ago.

Since this survey part only considers active coworking spaces, the exact reasons as to why more older coworking spaces are closing can not be explained. In general, however, coworking spaces close due to a lack of profitability, or simply because the operators develop different interests. They may, for instance, choose to only use the former coworking spaces for their own company, or to provide long-term rentals to fewer companies due to the high demand for such workspaces.

The capacity utilization is growing

Reviewing the last year, two third of all coworking spaces reported an increase in members, and a third of them expanded in size. 28% of spaces raised their average price and, as a result, more than every second coworking space managed to improve their profitability. Please note, however, that these results only indicate whether coworking spaces have experienced a positive or negative development, but not by how much. Precise numbers to support these developments will be published in the next reports.

Coworking spaces in megacities grew most notably when it comes to profitability and turnover. They also showed more indication of raising their average prices and hiring more employees. Almost every third coworking space in megacities opened at least one additional location, whereas only every fifth space overall did so.

Most coworking space do not experience a bubble - the surplus in megacities, however, is increasing

Even though, like in the past, most coworking spaces do not think that the market is oversaturated, one in five spaces say that there are too many coworking spaces, and thus too many competitors. This is a slight increase as compared to last year, and these rates have increased the most considerably in megacities, from 25% in 2018 to 31% in 2019.

Overall, just like last year, the acquisition of new members is the biggest challenge for coworking spaces (60%), followed by financial issues (37%).

► Next page: 2019 outlook & the potential consequences of a financial crisis