Click on the picture for more statistics. Picture: Parisoma (Deskmag) 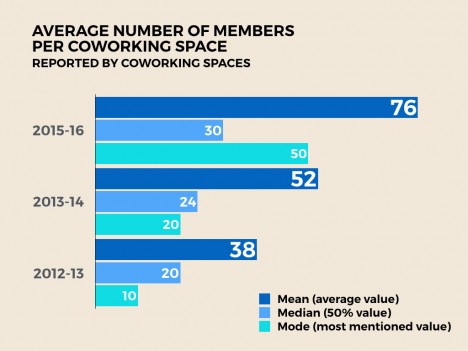 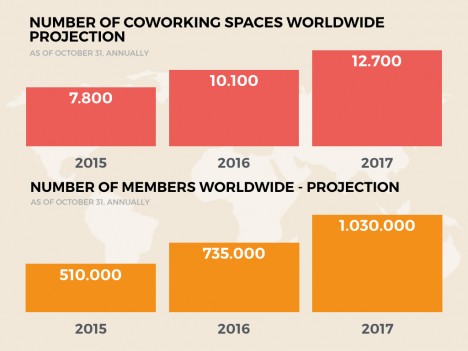 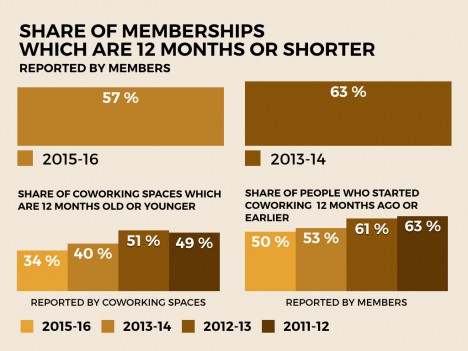 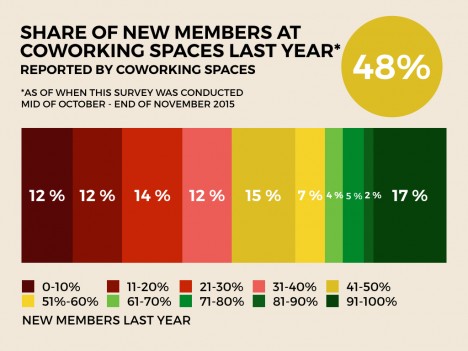 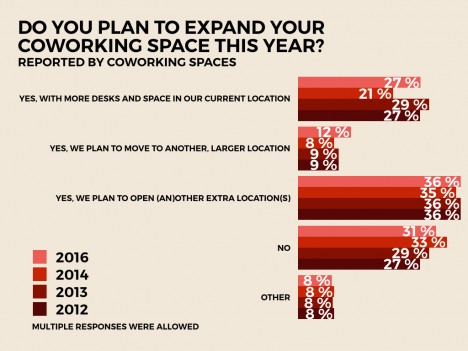 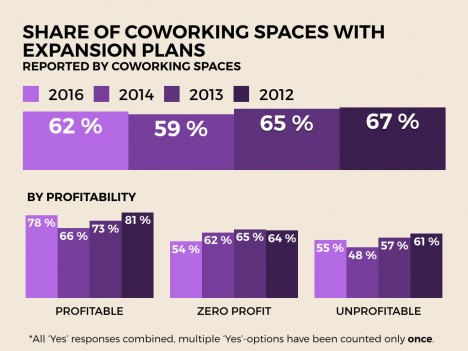 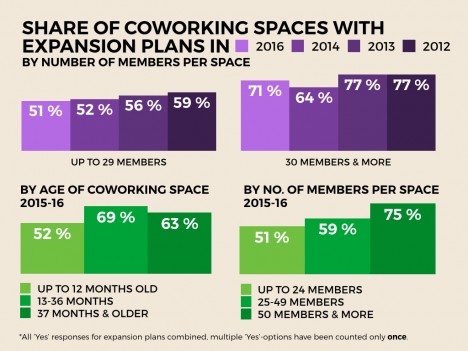 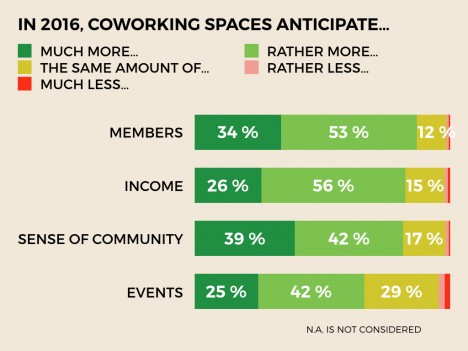 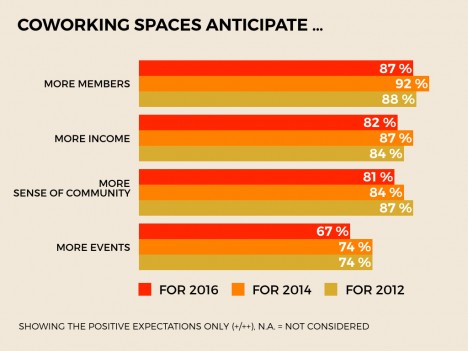 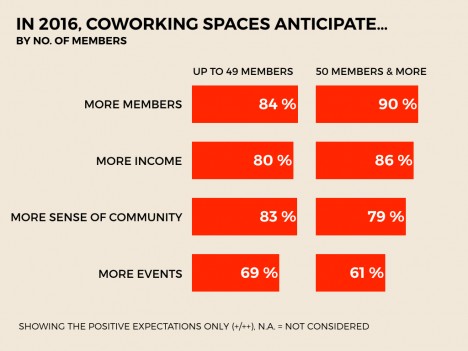 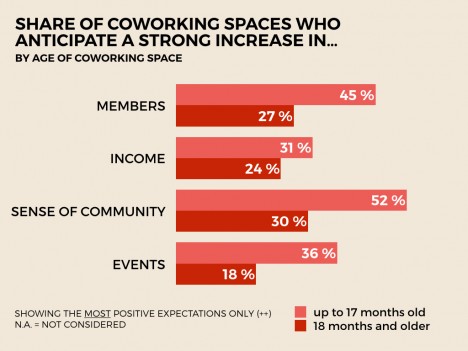 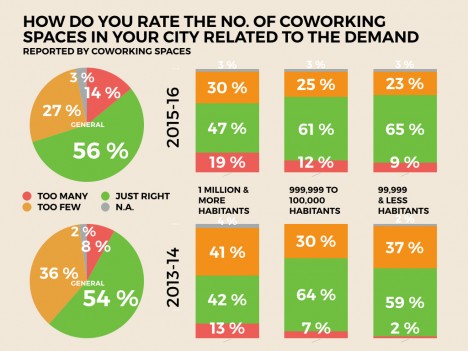 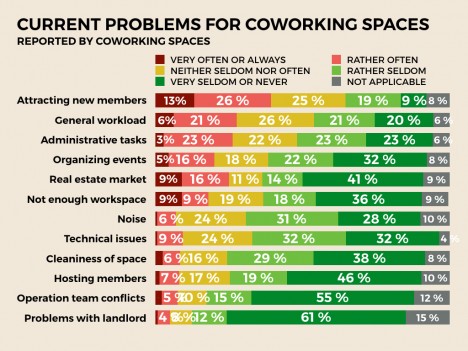 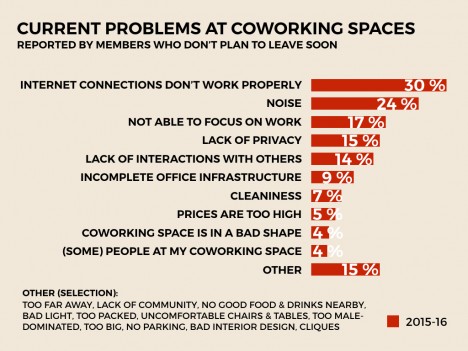 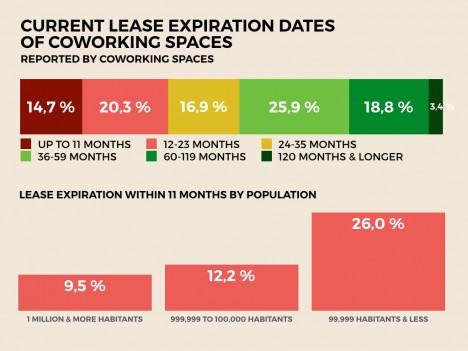 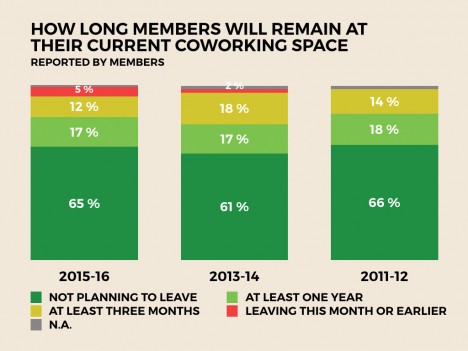 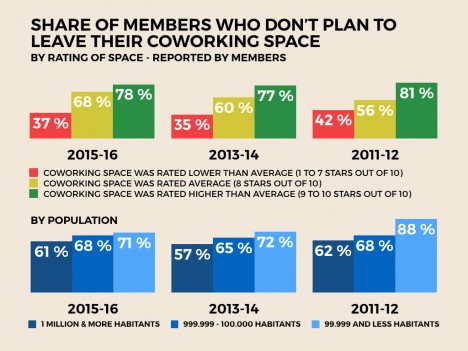 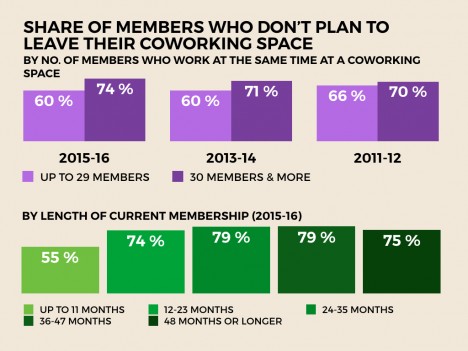 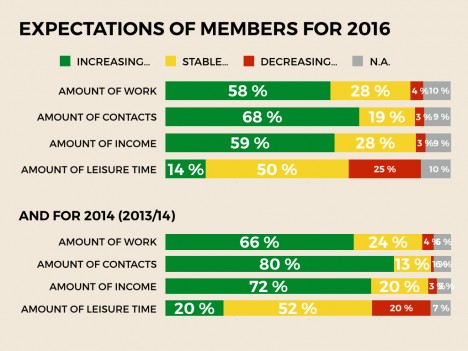 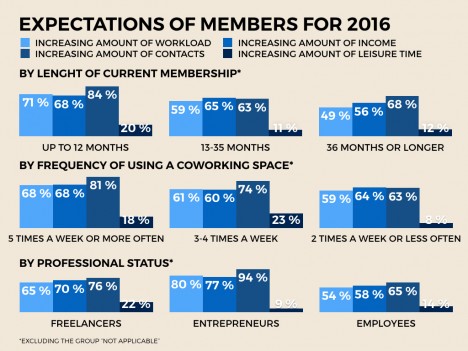 This year’s forecast and trends of the coworking market doesn’t differ strongly from past years according to new results of the Global Coworking Survey. While the coworking industry might have had some stormy and less than desirable market conditions in 2015 with increased real estate prices and challenges in growing awareness, those phenomena don’t have a negative impact on the global development in general, at least not more than in the past. This is the year we’ll see over 10,000 coworking spaces open by the end of 2016.
By Carsten Foertsch - Thursday, 28 January 2016

How is the coworking market going? Late last year spaces reported an average of 76 members, almost 50% more than just two years ago. This development continues with a view of the expansion plans and expectations of coworking spaces for this year continues.

62% of all coworking owners this year, reported wanting to expand their spaces, showing a slight increase from the 59% as reported by the 2014 survey results. Almost identical with previous survey results, one in three operators (36% in 2016 vs. 35% in 2014) reported planning at least one additional location. An interesting trend proven by this year’s survey is the similar proportion in increase year over year of spaces planning to add additional desks and space in their current location (27% in 2016 vs. 21% in 2014) as well as those planning to move their space to another location (12% in 2016 vs 8% in 2014).

Not surprisingly, the profitability of a coworking space offers owners a greater opportunity (or willingness) to move forward with expansion plans. In 2014 only 66% of profitable spaces planned to expand, compared to 78% in 2016. For those without profit or (so far) still unprofitable a little more than one in two are planning to expand. Unsurprisingly rising growth intentions of coworking spaces also with the number of members. It makes sense that the more members there are, the likeliness of increased profitability allows for more revenue to be reinvested in the business. For spaces that have 50 or more members, the likeliness of expansion is 25% greater than those who have 24 members or less. The largest amount of potential to expand also appears to be for spaces who are operating 13-36 months (69%) compared to 52% for spaces less than a year in business and 63% for those spaces 37 months and older.

Looking for the latest update? Check the 2017 Coworking Forecast

The overall positive expectations provided by space owners are still quite high, but have shown signs of leveling off when comparing 2016 to 2014 results. 87% of respondents report expectations of growing membership while 82% anticipate increased revenue. The slight decrease of five percentage points may speak to the fact that more respondents have been in business for a longer time. Typically those new to the market have the highest expectations for themselves, since they start from scratch with zero members and zero income. As the market matures, the share of new spaces (which are 12 months or younger) shrinks, and reached now 34%, compared to 51% in 2012/2013. Because most of the older coworking spaces still exist and are not simply replaced by a new one.

With more spaces available, how loyal are members?

As reported by members, four out of five of them plan to stay where they are for the next year. Two-thirds of members haven’t even considered leaving, a slight increase compared to the last survey. New data shows an increase in the number of members who work at multiple spaces (15% of 2016 respondents vs. 9% of respondents in 2013), a response most likely be linked to an overall increase of members who travel or identify themselves as digital nomads. Another response tied to possible increase in travel or relocation of members is that now one out of five members no longer work from their first space.

In 2016, overall satisfaction responses remain almost identical to those of the last survey. The least surprising fact proven by member responses is that those who rank their experiences as “poor” are more likely to leave. Rather surprising is the fact that, despite the increased choice of coworking spaces, that members who rated their space as “just average” were not only likely to stay, but the probability that they would stay, even increased. Member loyalty was also linked to overall population, with an assumption that the larger the city, the more spaces there are to choose from. In populations > than 1 million 61% of members reported not planning to change spaces, compared to 71% of members who lived in areas with a population < 99,000.

Last year several well known coworking spaces such as New Work City closed due to expiring leases that resulted in sharp increases in renewal rates. Approximately one in eight coworking spaces will face having to renew and/or renegotiate their lease this year. Surprisingly, however, is the differences between the sizes of markets. In large cities with more than one million inhabitants, the average is one out of ten spaces who will be renewing and/or renegotiating their lease compared to those in markets with less than 100,000 inhabitants, where the average is one in four!

New data collected this year showed that one in five spaces have moved at least once, and out of those that moved, almost every second of them did so because the old premises were simply too small - a fact evident especially in big cities. Only 7% of those respondents moved due to higher rents.

Local market specific data that correlates leasing information with those of extreme rents such as in New York, San Francisco or Hong Kong, so far can not be considered in the global analysis. With the exception of some cities there are simply too few coworking spaces to break down the results to individual locations without distortion. To ensure anonymity throughout the survey process, details such as locations or cities were not collected. For cities with a larger number of coworking spaces, this will change in the next survey.

▶▶ Next Page: Problems at Coworking Spaces & Expectations of Members