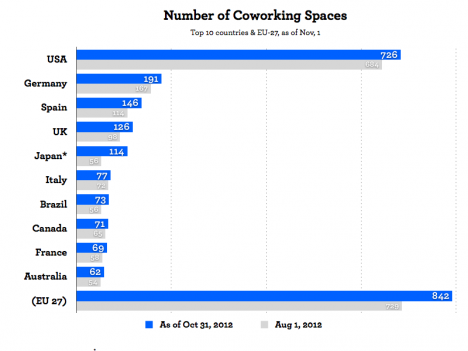 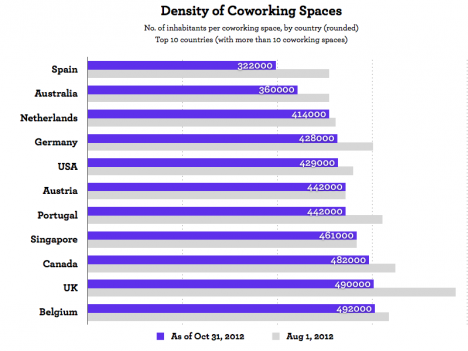 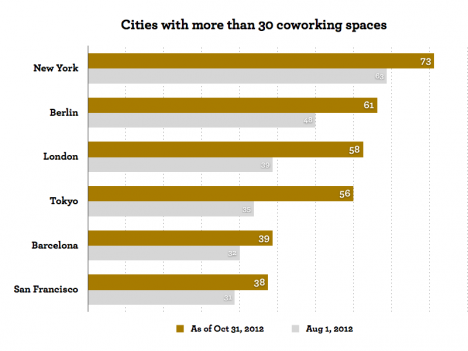 In October 2010, Deskmag began monitoring the growth of coworking, diligently counting the number of spaces to open and close. Two years ago, the count stood at 600 coworking spaces. Today, there are 250% more worldwide, with a total of 2072, breaking the 2000 threshold. On a country basis, the US leads the way by far; but this high number will mean a decrease in percentage of annual growth, dropping to a more sustainable number. The largest relative increases were seen in Brazil, Japan and the UK. But, as was the case in the last count, the highest growth belongs to Spain, a country in crisis - now having the most coworking spaces per inhabitant.
By Anna Cashman - Monday, 05 November 2012

The counting of coworking spaces is a fragile procedure, given the fluidity of the term’s definition. There are a number of conflicting accounts which put the number (in certain cities such as New York or Tokyo) higher or lower, depending on an individual’s understanding of the movement.

Deskmag, along with our sister site Deskwanted, diligently monitors new and closed coworking spaces which are made public on websites, Twitter, Facebook and other listing directories, to make sure our numbers are accurate. For statistical reasons, we include only those spaces who describe coworking as a main - or integral - part of their core business.

There is also the issue of in ‘inappropriate and unwarranted’ use of the term. In Spain, for example, many business centers claim to have ‘coworking areas’, identifying the word as a trending topic and trying to capitalize on its national success. There are, however, those that are legitimately trying to initiate a coworking space within their existing facility. We have paid special attention to these spaces, and included and excluded accordingly.

These things considered, the number of coworking spaces worldwide has demonstrated a growth that is nothing short of phenomenal. The numbers however are inflating at a different pace in different countries, which can be put down to several factors.

At the opposite end of the growth spectrum was Spain, with almost 150 coworking spaces; the most per capita of any other country. This is likely to be a result of the construction and real estate crisis, which left many architectural studios (which are more numerous than in other countries) with an excess of space and fewer substantial contracts. With the sudden lack of bog-contract income, these boutique architectural firms looked for alternative ways to use their design skills and employ empty space.

At present, the coworking growth in Spain does display the qualities of a bubble, since it has displayed the highest growth and has been the most affected by the crisis (excepting Greece, but which avoided a real estate blunder). Spanish unemployment too has shot up to 25% (youth unemployment is around the 50% mark), which could potentially create a situation where supply exceeds demand.

In Asia, Japan is experiencing phenomenal coworking growth, with a total of 114 coworking spaces, from less than a dozen two years ago. Keeping track of this growth has been possible thanks to a number of dedicated individuals in the Japanese coworking community who list new spaces on a google map, or who make the resource known to others.

In a regional count, the EU tops the list, with 878 spaces - up from 281 only 20 months ago. This growth has slowed too, however, with Australasia and South America growing by over 500% since 2010.

For those looking for inspiration to opening their own coworking spaces should plan trips to New York and Berlin, which have remained the world’s coworking hubs. New York still boasts the most coworking spaces of any city worldwide, however, with a total of 73.

Click on the graphics to view more detailed statistics of regions and countries.