The number of coworking spaces worldwide reached 1320. The strongest growth was recorded in many countries south of the equator in the past twelve months. The U.S. still has the most coworking spaces in the world. 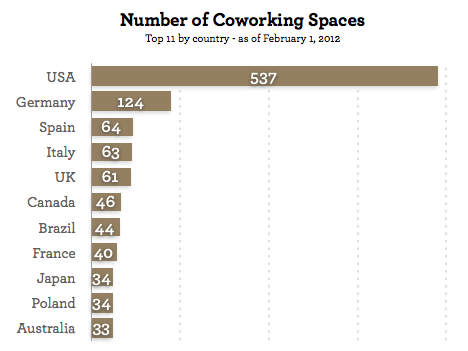 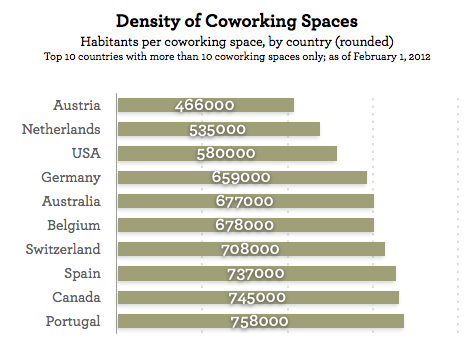 The number of coworking spaces worldwide reached 1320 at the beginning of February 2012, 88% more than a year ago. This incredible growth rate has been strongly supported by coworking spaces opening in South and Central America, Australia, and Africa. Meanwhile the coworking movement in North America continued to grow on a high level, but still at a slower pace than in previous years. In absolute numbers, the EU is about to catch up with the U.S. in a few weeks.
By Carsten Foertsch - Friday, 10 February 2012

Deskmag, along with our sister site Deskwanted, diligently monitors new and closed coworking spaces which are made public on websites, Twitter, Facebook or other directories, to make sure our numbers are accurate. Our current numbers are for 1 Feb 2011 until 1 Feb 2012.

According to our review, the U.S. still has the most coworking spaces in the world, with 537 (Feb 11: 315), or 41% of all spaces worldwide. Germany is the next biggest coworking country, with 124 spaces, followed by Spain, Italy and Great Britain, which has 61. Within the European Union, there are now 518 active spaces, and another 27 in other parts of Europe. Spain and Poland have jumped up in ranking the most in Europe.

Our city ranking has changed little since the last review. New York is still the number one coworking city in the world. Berlin overtook San Francisco to take second place. London remained number four. The count is based on the number of spaces within official city limits. If the surrounding areas are taken into account, San Francisco and the greater Bay Area contain the most coworking spaces.

The strongest growth was recorded in many countries south of the equator. South and Central America saw a growth rate of 167% in the past twelve months. More than half of this was in Brazil, which has 44 spaces, and about a third of them are located in Sao Paulo.

In Australia, there are also more than twice as many coworking spaces as a year ago. The largest coworking center in the region has developed in Melbourne.

Africa is seeing a strong growth rate too, as we wrote about here on Deskmag recently. There are now 14 coworking spaces on the African continent.

Highest density of coworking spaces per resident in...?

Densely populated areas (with many independent creatives) have a higher number of coworking spaces. We looked at which countries have the highest proportion of coworking spaces compared to the total number of residents. On this scale, the Netherlands and Austria come ahead of the United States. That’s not so surprising, as most European countries are more densely populated than in the United States. Australia also had a high ratio, which is a little more surprising as the population density overall is quite low, but more than a half of all Australians live in only three cities.

Only dedicated coworking spaces are counted

People work together on common projects in cafés, living rooms, parks. There are many businesses that open themselves to collaboration, or who allow freelancers to use their space, such as company offices or incubators. Many of them are great improvements on the traditional office model. But, for statistical reasons we only can consider dedicated coworking spaces, that use coworking as the main function of their business.

However, in the end it is less about the numbers we count. What counts more is that you can work in a space you like which is near you.