The Coworking Camp at Cebit 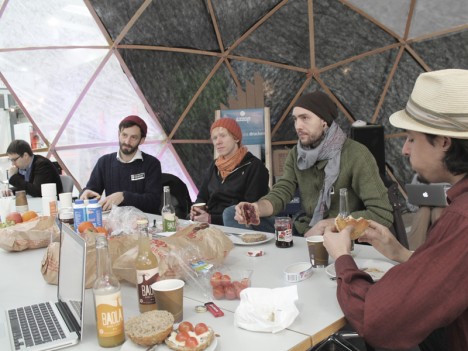 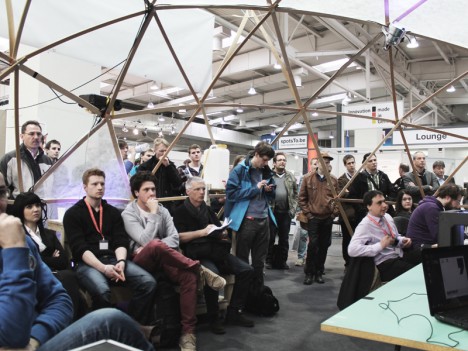 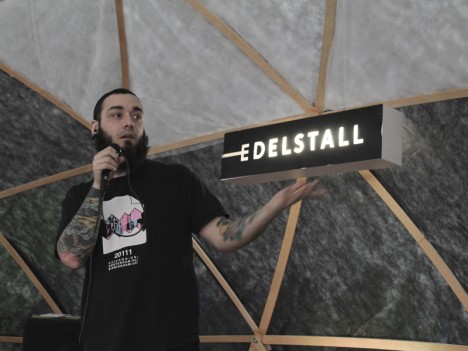 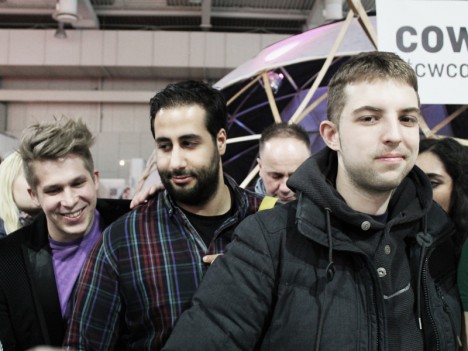 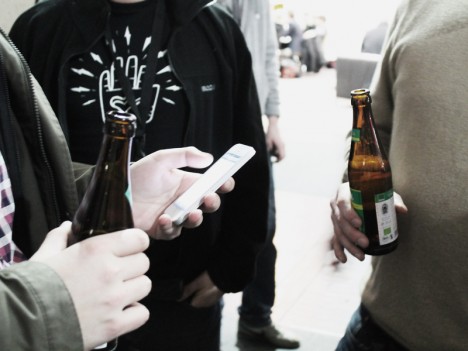 The CeBIT is the world’s leading event for digital business, IT and telecommunication. This annual trade show took place on the world’s largest exhibition grounds in Hanover, between the dates of March 5th to the 9th, of this year. The area extended over 5 million ft2 (496.000m2) and harbored 17 halls, which were filled with the latest technology from all over the world. International businessmen, wearing tailored Italian suits, matched with leather briefcases, exchanged their business cards and signed international deals. And at the fair's center people could get to know more about coworking at the Coworking Camp.
By Hana Hariri - Monday, 11 March 2013

In between the crowds, and the important business going down, was a geodesic dome inspired by Buckminster Fuller. The dome was constructed out of old slatted frames, and was built with love and mathematical precision by the edelstall boys from Hanover. Inside the dome was a casual haven, filled with relaxed people in jeans and knit hats. No, they were not a bunch of hipsters, it was just extremely cold outside.

It was the second year that there was coworking featured at the CeBIT. Last year the coworking stand was still small and a tucked away in the congress center, but this year it was right in the middle of hall 17, impossible for anyone to miss.

The coworking camp was the result of a collaborative project between several coworking spaces from Niedersachsen: Schiller40 from Wolfsburg, .space from Osnabrück and edelstall from Hanover. The three joined forces, and made this camp happen in just two short weeks. It was a very intense time with lots of work and very little sleep, but the results were impressive.

Coworking is all about collaboration and it was great to see that teamwork does not only happen within the spaces, but also between them. Wolf Goertz, the founder of .space, told Deskmag that it was great to see how well the cooperation between the spaces worked, and how fast you can actually get something done when you have a great team supporting you. Every coworking space involved has their own field of expertise, and each skill complemented the others perfectly. “It sure was one of the best and fastest collaborations I had the pleasure to be a part of,” he added.

Shareconomy was the theme of this year’s CeBIT, making it the perfect stage for coworking. Sharing and exchanging knowledge is what coworkers have been doing for years, before it even reached the mass market of technology. Christian Cordes of Schiller40, said that they wanted to show how the real shareconomy looks in the context of new work. It is not a purely digital thing happening only on the internet. Instead, shareconomy is when actual people come together, and as a result they take advantage of the digital media while simultaneously making a connection to real life.

The focus and goal of the coworking camp was to make coworking known to the public, and this was achieved by doing a little PR and lobby work.

There was also a neat program set up for the coworking camp: every exhibition day started of with a community breakfast, followed by a couple of hours of open coworking, and in the afternoon startups presented their projects. Even though, we have to admit that we didn’t really get a lot done there, it was a great place to meet interesting people and get to know about their projects.

One of the camp’s main attractions was, of course, the makerbot2: a 3D printer, which was constantly drawing a crowd. People simply stopped and stared at this little machine that was printing away all day long. But just watching it print loses its appeal after a while, so the coworking camp was offering free 3D printing workshops, that were booked solid a week before the event even started. The participants were taught about the different kinds of 3D printers on the market, and how to build models on their computer. Then they were left to experiment a little by themselves.

What is going on here?

A lot of exhibition visitors stumbled upon the coworking camp by accident, unbeknownst as to what was actually happening there. They stopped outside of the dome, and just stared at the coworkers sitting inside, like they were exotic animals in a cage. After about five minutes of gawking and not getting any wiser, they finally approached somebody and asked, “so… what is it that you guys are doing here?” The team patiently explained the principles of coworking to anyone that was interested.

Although most of these visitors will not become coworkers themselves, it is always good to spread the word and let them know that a different way of working and living is possible. And maybe, just maybe, we can make them a little jealous, because they have to sit in their big corporate office building day in and day out…

“It was a very busy week, and given some more time it could have been more professional,” said Wolf Goertz. Yet, on the other hand, it was the creative chaos that made the camp what it was: a relaxing and inviting place for those who were looking to escape the busy big-business part of the exhibition. It was a great couple of days, and we hope to see more collaborative projects and pop-up coworking spaces like this in the near future.