The Fascination of Coworking

Coworkrs - A coworking space in NYC. 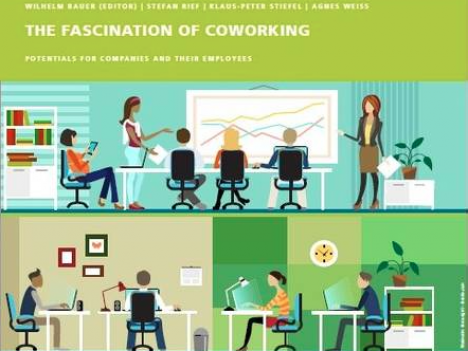 The fact that most coworking spaces are somewhat "cool" is probably the reason that most people become exposed to them. But - what is it exactly that has created the fascination with coworking? What do coworking spaces have to do to be seen as attractive? How should one respond to the pull that coworking apparently triggers for conventional companies? Is it conceivable that there could be a successful collaboration between companies and coworking spaces? The German Fraunhofer Institute IAO explored these questions and a number of other issues, which were published in a recent study.
By Klaus-Peter Stiefel and Stefan Rief, Fraunhofer IAO - Wednesday, 19 November 2014

This is a guest article by the authors of the book "The Fascination Of Coworking".

Coworking has arisen as a result of outsourcing trends found over the past 15 to 20 years. Yet, more interesting than the question of what the first coworking space was like, is the realization that coworking has evolved independently in different locations across the world. Thus, the time was obviously ripe for something new.

The fascination with Coworking

To find even more exciting information then what’s found in the early history of the coworking movement, we have considered the observation that coworking is actually able to conjure up a very special and unique fascination. "It's just about fun" – at least that was the atmosphere associated with coworking when it was described in a discussion at the 2012 Coworking Europe Conference in Paris. But, does the fascination come from the fact that it's just fun? Because, please, we are still talking about work, and now suddenly it’s only going to be seen as just fun ? Even if we deduct that specific part from that obviously enthusiastic statement, there is still enough parts left over which make coworking exceptional, fascinating and attractive within the work world.

Could there be a single key to understanding the fascination with coworking? Well, it certainly is beyond the scope of this article to fully explain, but if we take a closer look at the situation, while keeping the many freelancers in mind,  we see the initial reasons for this fascination with coworking defined by "freedom and independence". Absolute freedom in regards to work would theoretically mean that we are free to choose when, where, how much, with whom, for whom, and also for what, that we work. While it is unlikely or realistic that this absolute freedom exists, we do find degrees of this type of freedom on average within the world of freelancers, and this is significantly higher than those who are employees in a traditional company.

The first finding doesn't sound so bad, but on the other hand, some important things had to be done before the advent of coworking freelancers. First, to be able to fully understand a certain amount of other information has to be understood, which is found within the organizational infrastructure of the coworking space. The operator of a coworking space clearly explained the problem in one of our interviews: "It 's not just about flexibility, but also the headache ... the cleaning lady , internet , utilities, the conference rooms. All of those things are not something that  director wants to necessarily deal with just because he or she has started a company ... ".

In addition to that information, we found a common thread within all of our interviews, and that was that it is often perceived as pleasant to be able to separate work and personal life, especially within the physical space . This balance, of course, is typically found in coworking spaces, and it is achieved without having to sacrifice freedom or flexibility.

There was another shortcoming that we took into consideration when looking at the terms for Freelancers, however, this one is much more weighted. You can still operate relatively freely and independently, but ultimately this is done alone. The areas where coworking spaces see amazing success, is in the way that they build a community of like-minded people who exchange their work, support each other, and the formation of a work-related network that  ultimately benefits everyone.

The number one reason behind these developments is that the more lone fighters that build a powerful and flexible network of specialists, are then much more marketable due to their adaptability, thus they are able to get a lot more projects as an individual or if working within hierarchically stable groups. Therefore, the coworking community makes economic sense and additionally makes the atmosphere of the interaction between equals among equals much more fun. Which brings us back to the quote we explored at the beginning of the article: "It's just about fun".

But our fascination with coworking is not sufficiently explained with the example of a well-functioning community alone - even if this is a central aspect of the fascination. Nevertheless, teamwork can be seen as inspiring in the business world, albeit if it’s mostly in a slightly different way. But what is it? We think that there is a fascination with coworking for freelancers and startups due to the unique combination of freedom, independence, structuring and community - because such a combination is anything but ordinary. We have highlighted some of the reasons in our study.

▶ Next page: The potential for collaboration between companies and coworking spaces