Uncommon, a coworking space in London. Click on the picture for more stats. 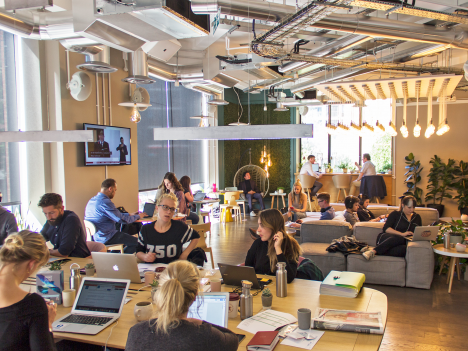 The UK’s coworking market has stood out from the European average in many ways since the coworking movement began. For example, its coworking spaces host more members and many chains have been active long before WeWork entered the market. These developments are mainly influenced by London’s rapidly growing number of coworking spaces. Outside of London, the UK’s coworking industry is similar to other countries. This article covers some quick facts about the UK's coworking spaces.
By Carsten Foertsch - Monday, 01 October 2018

Will the UK coworking bubble burst? According to operators, the answer is a clear ‘no’. Only 1 in 5 reported that there are “too many coworking spaces” in the UK, slightly higher than the global average. However, this differs in large cities, especially in London where the majority of coworking operators believe the opposite.

The independent analysis of the 2018 Global Coworking Survey was supported by Essensys, Nexudus & WUN Systems. A summary of the UK's results was presented at GCUC UK.

However, the coworking market in the UK is polarised. Average results should therefore rather be seen as an intersection rather than a representation of the overall situation. Large coworking spaces especially distort the average. In reality, more than half of UK coworking spaces provide less than 50 desks and 5000 square feet. Nonetheless, although the UK’s member number per desk of 1.39 (2017: 1.47) is slightly shrinking, it is still ranked above the global average. This result was calculated first per coworking space, before measuring the average for all coworking spaces.

The UK also differs from the European and global average in three other criteria: 1) The average lease is longer among coworking spaces. More than 40% of offices lease their location for at least 10 years. This result is also notably impacted by large locations. 2) 42% of coworking spaces are run by a company that operates at least two locations. This group mostly overlaps with those who have longer leases. 3) Every third coworking space in Britain is curated or serves a niche group.

But are there similarities too?

Understanding the statistics of open workspaces

The target coworking market in the UK

You can view the general statistics by clicking on the article image. All general global results are available via this link for free. The ‘Ultimate Coworking Space Data Report’ provides a more widespread collection of global results.

The 2018 Global Coworking Survey is officially supported by the following organizations:

Here, you can read more about the 2018 Global Coworking Survey.

* Unless stated otherwise, we express average values in 5% trimmed mean for unrestricted scales (e.g. number of staff members). This means that the lowest and highest 5% of all values are not taken into account. The result is that we can filter the extreme outliers from the average.