The closer you look, the better you see. This time we take a look at Greece. Sharing ideas surrounded by a beautiful panorama at an App Weekend with members of Colab Athens. 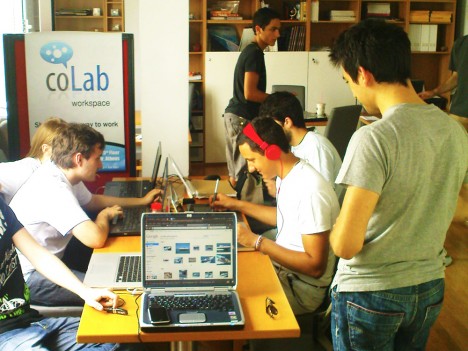 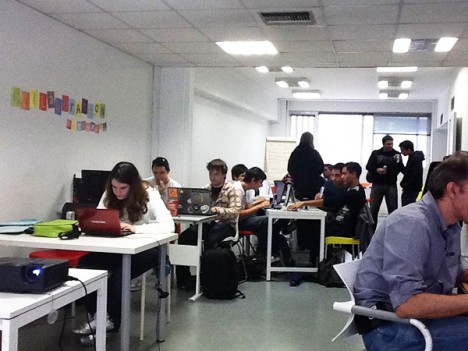 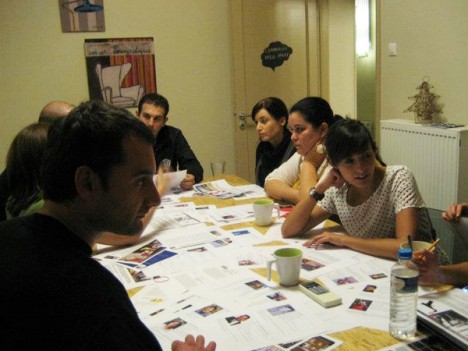 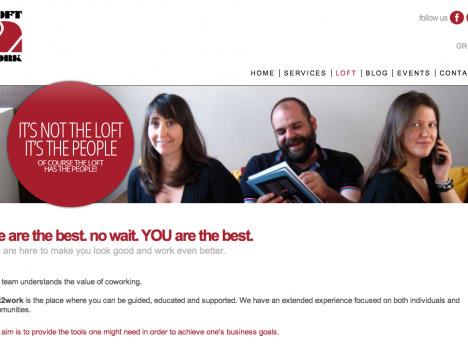 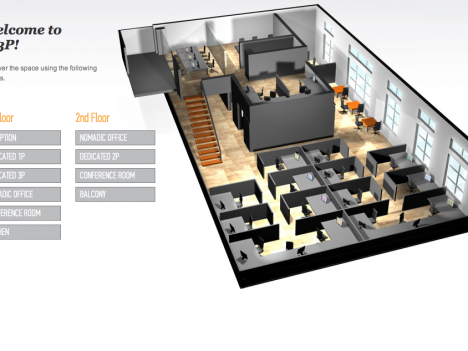 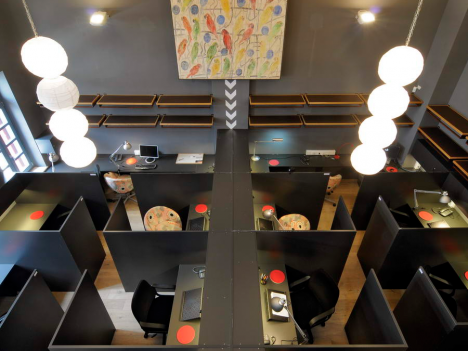 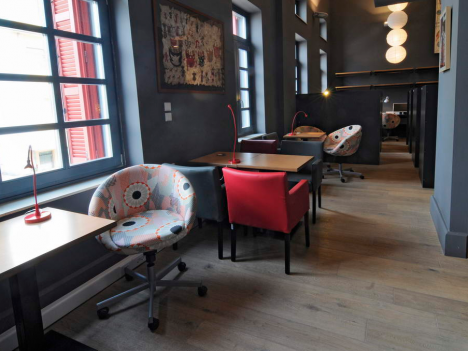 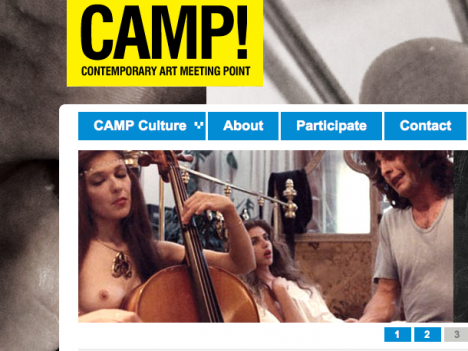 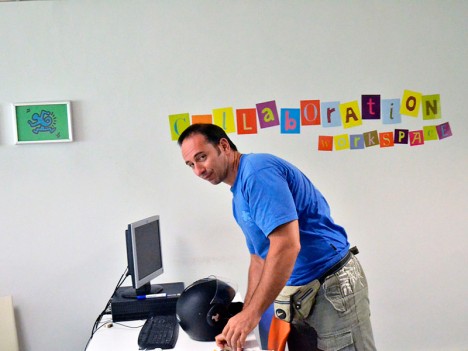 Even in countries where coworking has not taken off as explosively compared to others, looking at how the coworking movement has evolved and how it is interpreted in different countries can help us understand its different shades of meaning. Different perspectives help us better understand coworking in our own environments, through our own lens, and can open up possibilities for improvement and advancement. This time we're looking at Greece.
By Anna Cashman - Tuesday, 14 February 2012

The coworking scene in Greece is somewhat of an anomaly. Whereas the European Union is only just trailing the US in term of numbers and other Mediterranean countries have experienced huge coworking growth amidst disastrous economies, Greece has been left behind. There are currently four coworking spaces in Greece, with one more to open within the next 6 months. There are other organizations which have mission statements identical to that of coworking, but which do not brand themselves as such.

This article will explore the coworking scene in Greece, the environment in which it is emerging, and examine some interpretations, uses, and possibilities for the movement. Of course, the fluidity of the term 'coworking' means that not all coworking enthusiasts in Greece will subscribe to all methods. Nonetheless, the ideas presented here are interesting perspectives of the coworking movement, and can help expand the possibilities and understanding of the entire global community.

Overview of the situation in Greece & Athens

The Greek economy is the embodiment of one of the Grecian poet-philosophers’ enduring tragedies. Since March 2010, the country has received €110bn in bailouts and, another €130bn is still pending, provided Greece can enact wide-ranging austerity measures targeting the public sector. One of the austerity measures in particular has dissuaded individuals to sign work contracts with businesses and corporations.

Most recently, a 32% cut to the minimum wage for under 25s was imposed, and a 22% cut for over 25s. The prospect of joining company ranks is hardly attractive. On top of this, companies are shrinking their workforce, and unemployment has exceeded 20% (youth unemployment sits at 48%). These factors have added fuel to the growing trend of independent and contingency workers who make up the majority of the membership at coworking spaces.

Why has coworking been slow off the mark?

Despite the rise in freelancers and a need for alternative ways of doing business, coworking growth is stunted compared to other European capitals. Some might attribute this to the calamitous economy, which is by no means ideal to start a business. But Konstantina Zoehrer, global ambassador for Jelly Week in Greece and community manager of coworking space Loft2Work, thinks differently.

“The crisis is not the reason why coworking has not taken off, I think it’s more about educating the community and setting up a healthy ecosystem in which coworking can thrive,” she said

In essence, lack of education is to blame, and the more and more people who know about coworking, the more mouths there are to spread the word; word of mouth is exponential. Evidence of this lies in the fact that, only three years ago, Jellies were unknowns to the working world. Now, more and more spaces are participating in Jelly week and more individuals attend jelly events, so the idea of working collaboratively sticks.

Another reason that shows the economy has not inhibited coworking growth is that organizations, both public and private, have given a lot of attention to the coworking spaces that do exist. Companies are viewing coworking spaces as hubs of creative activity and innovation.

A significant number of Athenian businesses have realized (arguably more than in other cities where coworking is booming) that coworking spaces are excellent places to find talent and drive innovation. In Loft2Work, the second coworking space to open in Greece, businesses and social work groups often book the space for brainstorm sessions and to use the meeting rooms. There's a big social part, and a commercial part, and the coworking spaces is neutral ground for these two sectors of society to come together.

Connections between what are companies in the commercial space and, what are identities in the non-profit area or the educational area. We also collaborate with educational institutions a lot.”

“Coworking is not only a bridge for freelancers to connect with each other, but also to connect several sectors of the economy. Whether it’s the public sector, or the private. There will be more, and stronger, connections between freelancers and other bigger organizations – through coworking.”

What coworking means in Greece (for some)

Coworking in Greece, then, is a vessel for a broader social message. Individuals like Konstantina and the staff at Loft2Work use the work model to communicate to the wider community that they need not be afraid of the current situation. “There’s a community. If people work together, things are going to happen – and most of the time it’s positive.” The networks created between the corporate and social entities too will help establish a balanced business environment where companies, and individuals as companies, can thrive.

Even with the corporate ‘thumbs up’, coworking is still met with skepticism amongst individuals. But at heart, the Greeks are a communal people. This is proven by the way they eat, drink, dance, and mourn: societal values revolve around the ideas of community and social cohesion. Coworking just fits in.

“Maybe some Greeks will say ‘no, we don’t have this coworking spirit’, but if you go back to the villages and you see they are communities, so coworking brings back the value and the sense of creating a community and collaboration [within it]. I think it could have a big impact. Maybe not the next months, but I guess in this year or the next few years.

“People [in Athens] have just forgotten what community is about. It’s just a matter of making people remember, and reminding them what a powerful tool community can be,” Zoehrer said.

Colab Athens was the first coworking space in Greece. It is technology and business oriented, and offers start-up and entrepreneurs accelerator programs and workshop to help start, grow and develop a business. Full time membership costs only 140€ per month for a desk in the center of Athens right near Syntagma Square.

Loft2Work opened in March 2011 with a focus on social, creative, cultural. Not start up oriented. The idea is to make it feel like home. 20 members, 200sqm. Numerous and frequent workshops oriented around personal development, rather than business development. The Loft2Work philosophy is about spreading knowledge, empowering individuals in healthy business ecosystems, and engaging youth.

123p is the newest coworking space in Athens, last week introducing coworking to their original office sharing facility. It is a large space geared towards startups and new technology. Located in central Athens not far from Loft2Work, the area over the past months has been abandoned, but is where most of the things happen in the city – there’s a concentration of entrepreneurial activity, and this is something that both spaces wish to empower.

THERMI LINK is the only coworking space in Thessaloniki. It was launched in 2011 by Thermi S.A., a group of companies which boosts the development of businesses in all stages of their life cycle. The coworking space and incubator provides shared workspace, networking opportunities with top professionals and participation in events and workshops for all members.

In addition, a new coworking space will be opening on Crete, the largest Greek island, within the next six months, and an interest group is talking of opening a space in Patras.

What can others learn from Greece?

Most would agree that the current situation in Greece is a significantly different environment in which to introduce, and proliferate, a new idea like coworking. In turn, the way coworking is understood changes and its uses and advantages adapt.

Of course, the coworking spaces in Greece do similar things to what coworking spaces worldwide do. If they didn’t, they wouldn’t be called coworking. However, coworking, not for all, but for a number of important and influential players in the Greek movement, is also seen as a vessel to bridge different sectors of the community.

To reinject innovation and creativity into companies, which will in turn fuel the entrepreneurial ecosystem. Coworking spaces can be used to facilitate dialogue between individuals, corporations, and social and educational organizations. They are a means to empower youth, which is a crucial task for all Greeks in Greece, especially with the current state of the economy.

The scope of coworking in Greece is much more than the community within it. It’s about social trade using the currency of collaboration.