Raumstation was specifically designed for coworkers. For interviews, they built a sound-isolated room with transparent walls. (Image: Raumstation) 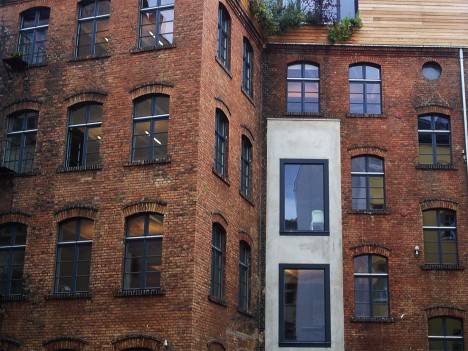 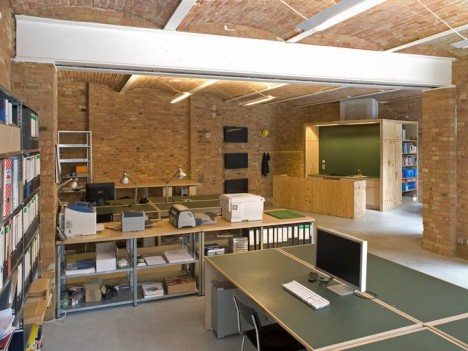 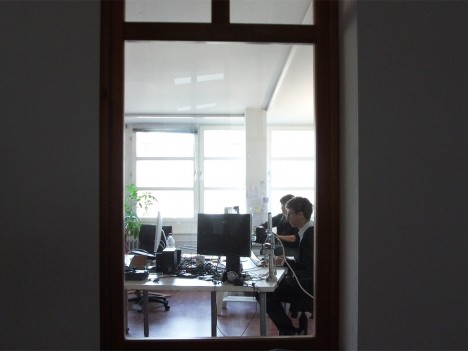 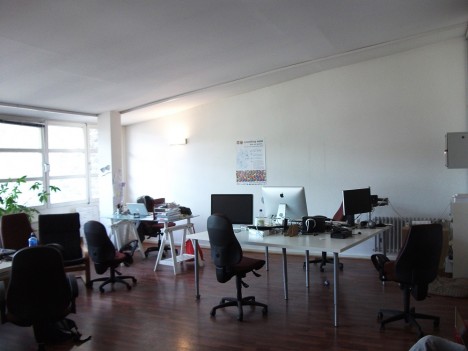 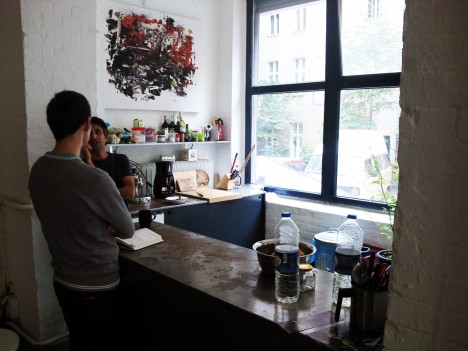 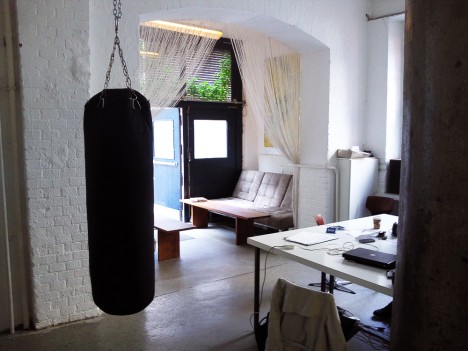 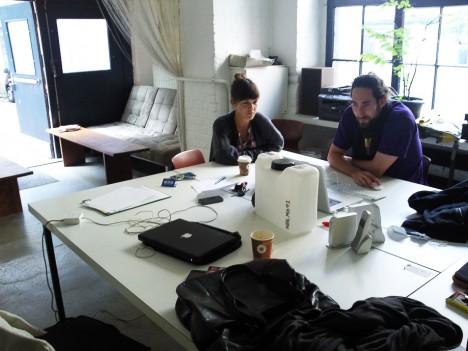 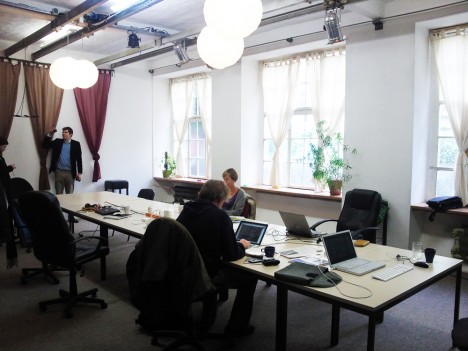 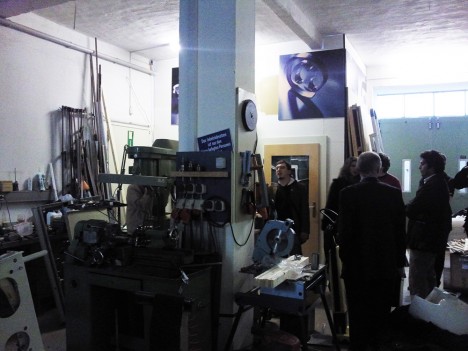 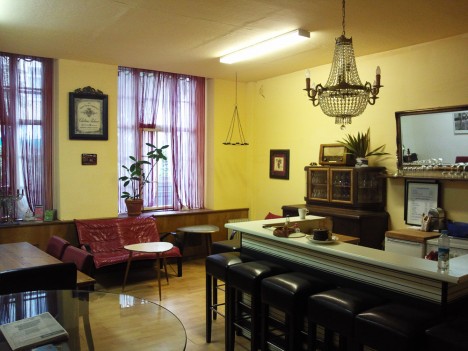 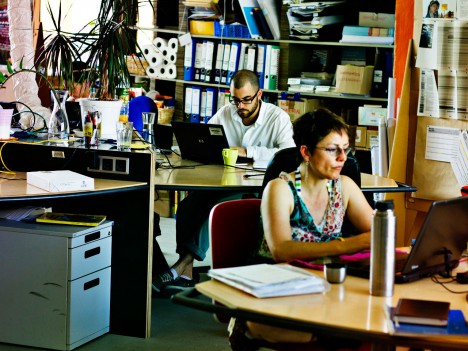 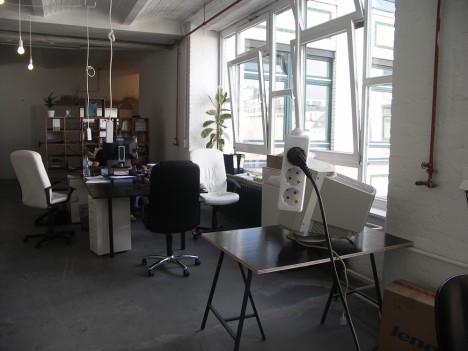 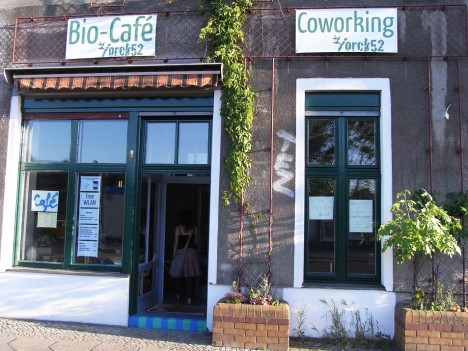 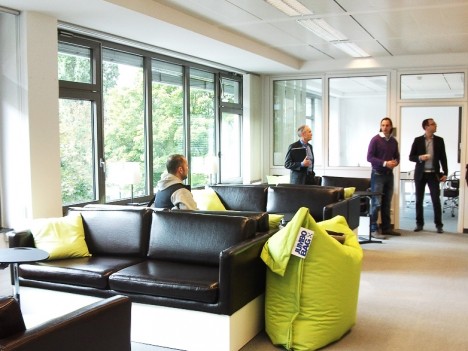 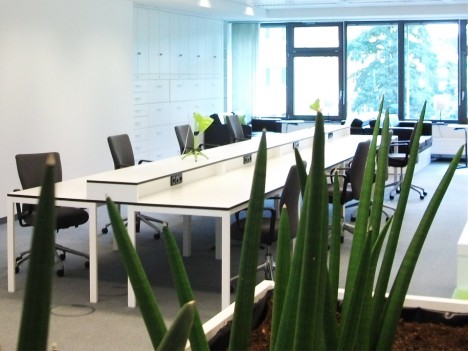 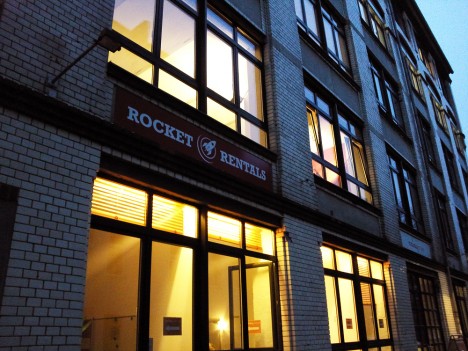 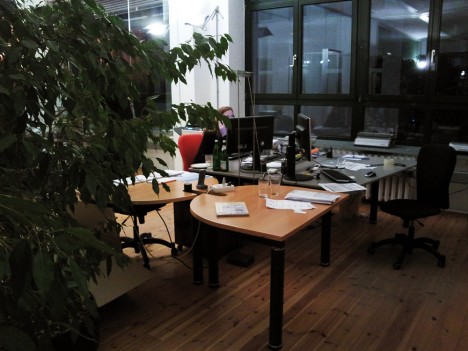 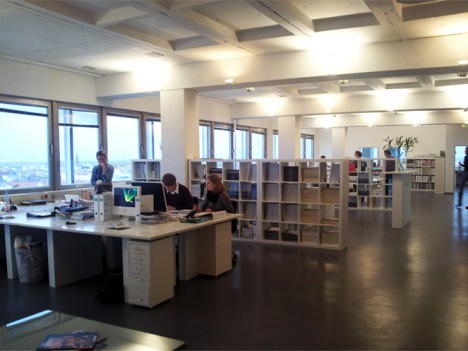 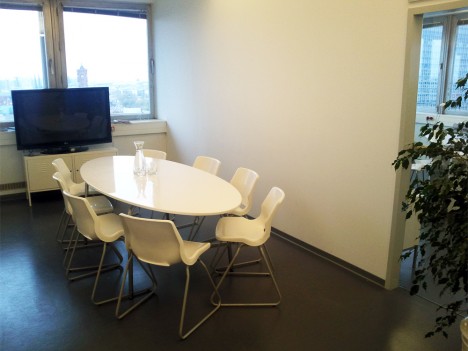 Berlin has become one of the global centers for coworking. The city’s tenth coworking space will open in the coming weeks. The relatively low cost of living and cheap rents has created an environment perfect for innovative independent workers and startups. An oversupply of industrial and office buildings in the city center has made it ideal for coworking spaces, which are able to transform unused manufacturing floors into rooms for freelance interaction. There are working spaces to suit all tastes and budgets – from noisy and basic backrooms to flash business center-style offices.
By Carsten Foertsch - Thursday, 04 November 2010

The Business Class Net Berlin (BCN Berlin) is a pleasant medium-sized office in a hinterhof in central Kreuzberg, run by Manu Kumar, a friendly artist. He came up with the concept in 2006, long before “coworking” became a common term and opened his space on May 1st, Germany's Labor Day. It is incredibly warm even during winter, and the constant presence of Manu’s pet dog makes it homely and comfortable.

It has eight large white tables grouped in configurations of two to four desks. It is possible to be independent or to interact. There’s a good kitchen for cooking or making coffee. The space is located in a hinterhof close to the Landwehrkanal, which bursts to life each Tuesday and Friday when the Turkish market opens for business along its banks. BCN is a global network of coworking spaces which works on a fairchise concept.

Studio70 is located in a courtyard close to Hermannplatz in Neukölln, and can accommodate about 12 coworkers. Because everyone works at one large central table, this space has developed a more personal, less anonymous atmosphere than other coworking spaces. There is a private area separated by a glass door for phone calls and meetings. Another room with a bar and seating area is also inviting for conversations or to have a break. And a recently-added workshop area equipped with tools allows practical coworkers to get their hands dirty.

Studio70 is one of five coworking spaces located on the U8 U-Bahn line, which is why the U8 has become the unofficial coworking line. The hosts are actively engaged in pushing the Coworking scene in Germany. They offer attractive prices to coworkers with small budgets.

ClubOffice is Berlin’s biggest coworking space by capacity. It calls itself “premium coworking”, and the label suits. It is actually part of a large business center, and so carries some of the official atmosphere of its parent company. The furniture and working environment are far more professional than in some other spaces, making it more attractive for people seeking a classic office image.

That said, there is also a lot of collaboration at ClubOffice. There are regular interactive meetings and a bar area where conversation is encouraged. One of the advantages is the policy that allows coworkers to also use private offices whenever they are available.

ClubOffice recently opened a kitchen which can be rented by freelance chefs, and also owns a horse-drawn coach which it uses for innovative meetings.

This coworking space sits on the top floor of a semi-industrial building in the heart of Kreuzberg, right near the Kottbusser Tor U-bahn station. Co.up is inhabited mostly by programmers and coders, unsurprising since it was founded by a team of software developers. The constant supply of Club Mate and Bionade should make any hacker’s heart beat faster.

The prices are some of the more reasonable in the city, with flexibility for part-time users. It is medium sized, and having private conversations can sometimes feel a bit public. but the hosts and fellow coworkers are welcoming and accommodating.

This coworking space has extra large elliptical-shaped desks that don’t directly face each other. The effect is to provide a bit more privacy, and encourages more concentrated work. The atmosphere here is one of getting things done, and so it attracts a slightly more professional-minded coworker than other socially-oriented spaces.

The space is operated by IQ Consult, a social enterprise that runs coaching and support programs for people starting their own businesses. For that reason, many of the coworkers here are involved in some form of socially-minded business, though it is not obligatory.

A branch of the global coworking chain The Hub operated in this space for almost two years. In February 2010 The Hub closed and Impakt Berlin opened in its place.

Raumstation is a dream come true for an architect. The owner acquired the entire building at auction, and was able to expand over several floors. Each of the four floors has its own infrastructure, with a large working chamber and an open kitchen, accommodating up to ten coworkers from all professions on each level.

The rooms are less hectic than some coworking spaces, probably due to the rental conditions. A desk can only be rented on a montly basis and for a minimum of two months. But the Raumstation does offer a free trial week. Non-profit organizations receive discounted rates for their first few months. Located in Moabit close to the Ring Bahn, Raumstation is currently Berlin’s northernmost coworking space.

Launch Coworking: Coworking in the east

Launch Coworking (formely know as Rocket Rentals) grew out of a shared office which specializes in web projects. When the company moved to Warschauer Straße, they decided to open their office to up to eight coworkers from all professions. The office was already set up to meet the needs of coworkers, including a welcoming kitchen with comfortable seating, a meeting room, separate offices and a large common work room.

Launch Coworking is the only coworking space in Friedrichshain. Located between the Warschauer Straße U &S -Bahn stations and Frankfurter Tor, the space is in walking distance to a variety of food options. The owners also recommend eating lunch together in the coworking space. Desks at Rocket Rentals can be rented out monthly

Betahaus is not the first coworking space in Berlin, but the best known. This is thanks to a lot of good press coverage – they were even mentioned in big German news magazines before they opened - and several large opening parties.

Betahaus set up a simple but creative interior. Desks are made of particle board resting on metal frames, electrical sockets dangle from the ceiling, and floor lamps are mounted upside-down on the roof. Over 100 coworkers are housed over two floors in central Kreuzberg, with a large café space at the entrance offering coffee and food. There are regular events and parties which allow coworkers to interact.

Set between the impressive Yorck rail bridges, Yorck 52 opened in June 2010 along with an organic café, offering complete office infrasctructure including lockers, presentation equipment, a meeting room and facilities for up to six coworkers. For those who like to work with wood, fabric, metal and electronics, there is also a workshop available.

Yorck 52 specifically targets coworkers who operate sustainable projects. It is located right next to the former railyards, which are currently being transformed into one of the largest public parks in the city, making Yorck 52 the greenest coworking space in Berlin. Fast connections to the U and S-Bahn system enhance this image. Update: Yorck52 has closed in September 2011, the owner had been elected to the Berlin parliament which requires his full-time attention.

When it opens in January 2011 on the 14th floor of a building overlooking Alexanderplatz, Creative Media Lab will become the most central and highest altitude coworking space in Berlin. Up to 35 coworkers will be treated to views over the city and the TV Tower. The same building is host to Made, a private art laboratory, and the Weekend nightclub.

Creative Media Lab aims to attract freelancers and small businesses working in the creative industries. The operator of the space is the BBE Group, the publisher of Sleek magazine, a magazine for art and fashion. The office will have an open kitchen and a meeting space. Smaller offices, separated by glass partitions, allow more private conversations.