More results from the 2nd Global Coworking Survey. Click on the image to see detailed statistics. 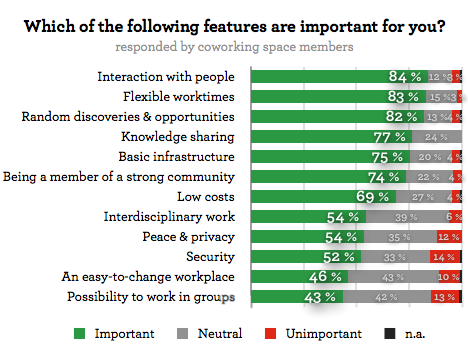 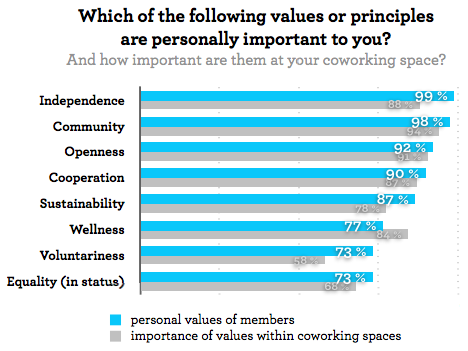 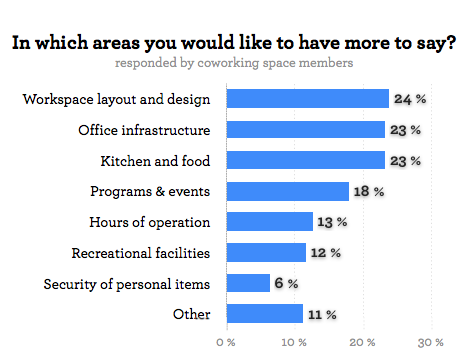 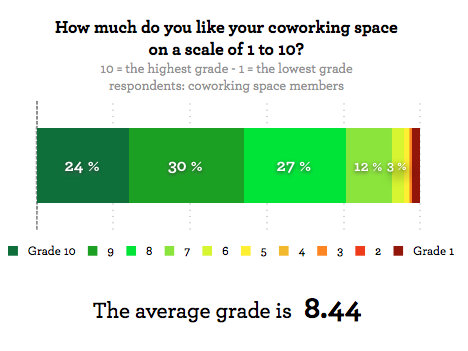 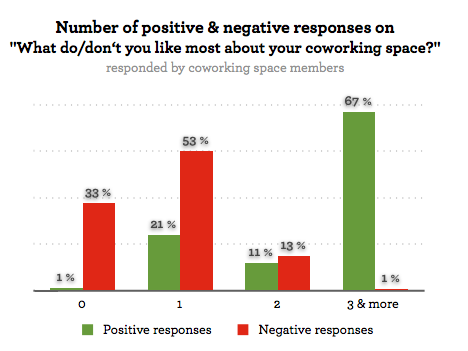 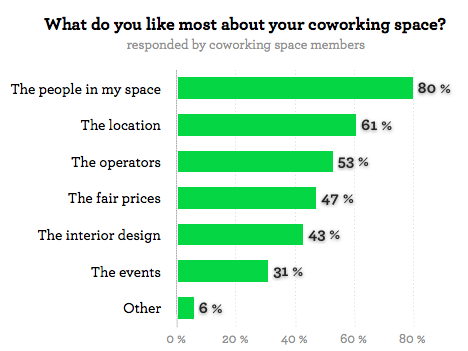 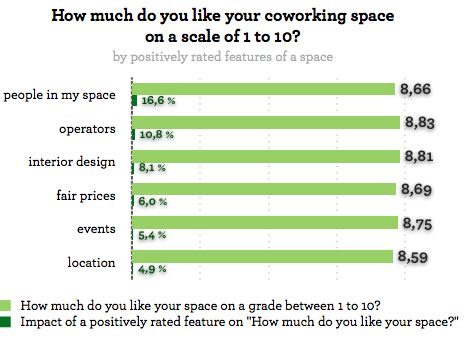 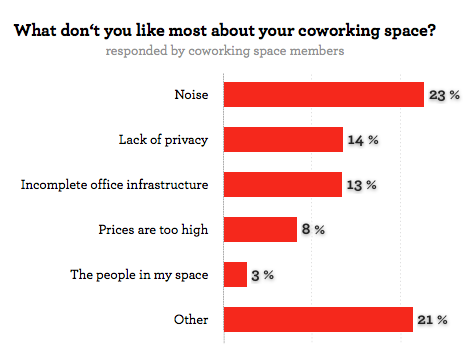 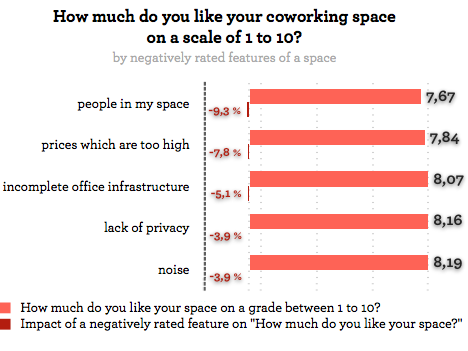 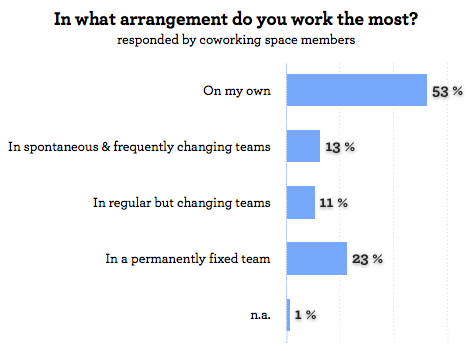 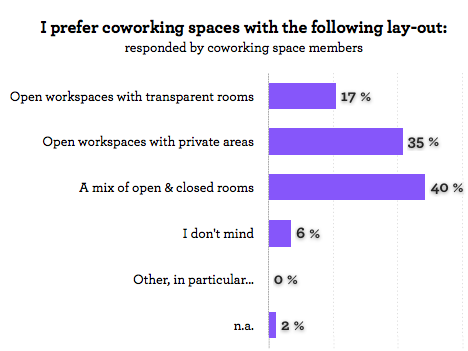 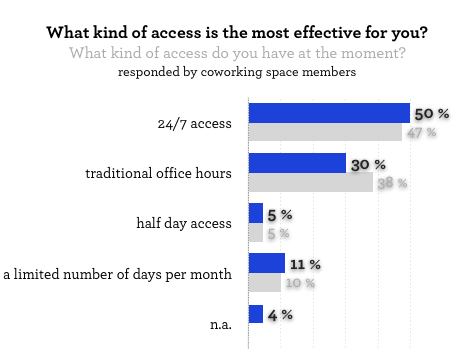 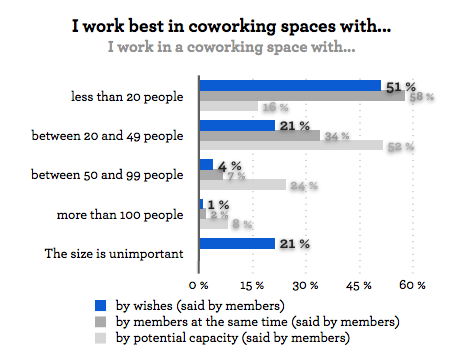 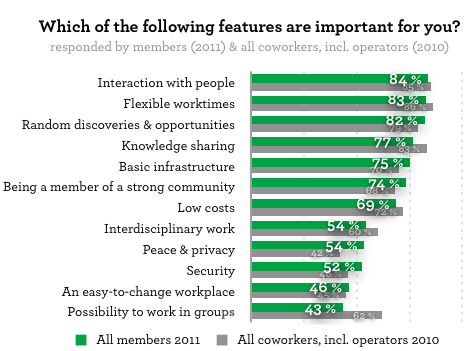 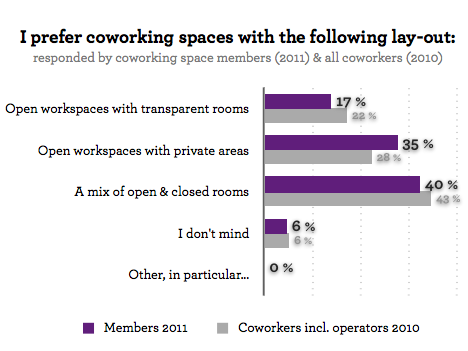 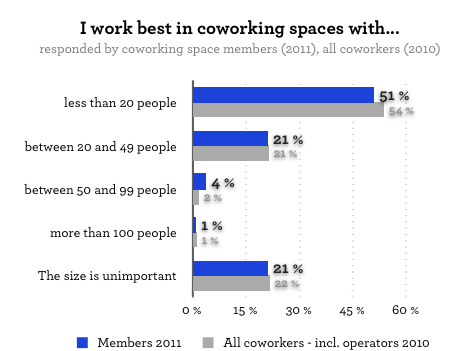 The ideal coworking space would offer 24-hour access, have an even number of flexible and permanent desks, and would involve members in decisions about the interior design. That’s the picture drawn by the 2nd Global Coworking Survey, which asked coworkers what they want from their workspace. The good news – spaces are doing a great job, with an average rating of 8.4 out of 10. The bad news – they’re too noisy for a quarter of coworkers. However, the other good news is that decibels do not impact a coworking space's popularity: members do not leave their space on account of loudness.
By Carsten Foertsch - Friday, 17 February 2012

The workstyle and projects of coworkers determine the demands they place on their workspaces. Compared to the first Global Coworking Survey, these factors have hardly changed at all. Most important for coworkers is interaction with other people (84%). A space should provide flexible working hours (according to 83% of respondents), and encourage serendipitous discoveries (82%).

Three quarters of all respondents want to share knowledge with members, and so look for a strong community. The same number expect their space to provide basic office equipment.

For many, coworking doesn’t always have to mean working with other people in teams. One half are happy working mostly alone (53%), and the other half in spontaneous, changing or fixed teams.

Yet permanent team workers are not necessarily more sociable. Those who prefer solo work (within their coworking space) are more likely to meet with other members after work, the survey data shows. And they’re also more likely to promote the coworking movement more often outside the space.

The most important values

Independence, openness and community: for the members of coworking spaces, these are the three most important values that they expect their workspaces to reflect.

There’s an apparent contradiction between wanting independence and community, one that coworking spaces must constantly seek to resolve. The same applies in the demands users have for the physical layout of their workspaces – members want it both ways, a mix of open and closed spaces (40%), or open spaces with some private areas (35%).

51% prefer to sit in rooms with less than 20 other people. The affection decreases with size. However, it’s rare for all desks to be occupied at all times, which gives big spaces some leeway. Like in last year’s survey, the size of a coworking space is unimportant to one-fifth of all respondents, so there are users for spaces of all sizes.

One in two members access their workspace around the clock. Only 30% like to work during traditional business hours (9am to 5pm, or 10am to 6pm in most countries). It’s interesting to note the difference between the desired access times and the actual current access – 38% use business hours (meaning there’s a slight demand on more flexible plans). Half-day access is rare, and one in ten members have a limited number of days per month. The monthly 24-7 plan is emerging as the coworking industry standard.

Even split between permanent and flexible desks

There’s a fairly even divide between the number of coworkers who like to have their own reserved desk (47%), and those who like to use flexible desks that they must clear at the end of each day (51%). The difference between the demand and the actual supply of these two desk types is interesting: for example, more people reported working on flexible desks than the those who reported wanting them. Coworking spaces can consider this when planning their desk arrangements.

Coworking spaces often try to include their members in decisions. But what decisions are most important for them? At the top of the coworkers’ wish list is workspace layout and design (24%). Office infrastructure and kitchen and food are also high on the list (23% each). Some would like to have more input into the events program (18%) and opening times (13%). The “others” field in the survey collected a number of other requests, such as better cleaning, communication and desk allocation.

What bothers members most?

We asked coworkers what they like least about their workspace. About one in four coworkers are annoyed by the level of noise in their coworking space. 14% bemoan the lack of privacy or the inadequacy of the office infrastructure. Only 8% said the prices were too high, and 3% said the other people in their space were annoying. However, a third of all respondents had no complaints whatever, and 53% only one.

It’s interesting to compare these complaints against the overall rating that coworkers give their spaces. Those who are bothered by noise still give high marks – an average of 8.2 out of 10, compared to an average of 8.5 out of 10 awarded by those who didn’t identify noise as a problem. This shows that the existing problems are only a marginal detraction, and that coworking spaces are doing a pretty good job despite them.

A bigger impact on popularity was experienced by those spaces whose members complained about high prices and fellow members. It seems setting costs high raises expectations, and leaves some disappointed. But just a few respondents reported a problem with high prices (8%) or their comrades (3%).

While respondents expressed criticism sparingly, they were more willing to give compliments. 80% of coworkers like the other members of their space, and 61% like the location. Space operators are next in line for praise (53%), followed by reasonable prices (47%). Only 1% couldn't praise their space for anything, two third selected at least three characteristics or more which they like most.

Again, we looked at the impact of these compliments on the rating that an individual gave their space. Respondents who liked other space members gave far higher ratings than those who liked other elements – a 16% increase, in fact, from an average of 7.4 out of 10 to 8.7. Having likeable members is something a space manager can’t really control, but they can make an impact on coworker satisfaction by being likeable themselves; the space operators themselves were the next most effective ratings-boosting factor. Low prices prompted the smallest boost to popularity of all factors.