"Freelance" was originally two words, "free" and "lance", which references independent workers and the weapons they used. Here we see a Bedouin warrior, a nomad and independent worker with a lance, around 1900. 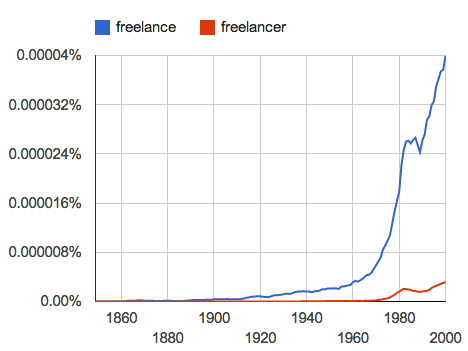 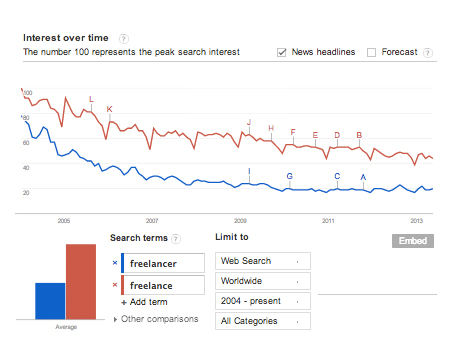 Writing for a targeted publication such as Deskmag can have certain side effects, namely that you begin to pass the information around you through the broad filter of freelancing and coworking. You hear an album that was recorded in the artist’s bedroom and think about self-determination and access to cheap technology. You see a film about pirates and think about organization and collaboration. And you work as freelancer and think about the origin of this term.
By Jim Blackstock - Tuesday, 21 May 2013

Given that I’ve only known freelance work for the past ten years, one could rightly argue that my mind is already set to that default. So it was no surprise, as I was reading a book of short stories from P.G. Wodehouse, when the wordfree-lance (with a hyphen), leapt off the page and into my wandering mind. What could be the origin of the word so widely used today, yet seemingly so different from its literal meaning?

In a story titled The Inferiority Complex of Old Sippy, written in 1930, Wodehouse gives us a peek into the idea of a freelancer nearly eighty-five years ago. “All these editor blokes, I understand, get pretty careworn after they’ve been at the job for awhile. Six months before, Sippy had been a cheery cove, full of happy laughter, but at that time he was what they call a free-lance, bunging in a short story here and a set of verses there and generally enjoying himself.” Wodehouse was referring to a writer who makes a joyful living as a freelancer before turning to what we would consider a more structured position as a salaried editor. (If the idea of writing in a coworking space sounds good, see the Deskmag article about just that). But writing aside, this got me thinking. How long has the term freelance been used to indicate someone who sells his or her work or projects on an individual basis and is not beholden to one particular boss?

A quick scan of the internet reveals many brief articles about the origin of the word freelance and all seem to be in agreement that the first use of the word in print comes from the book Ivanhoe written by Sir Walter Scott in 1819. He writes, “I offered Richard the service of my Free Lances, and he refused them—I will lead them to Hull, seize on shipping, and embark for Flanders; thanks to the bustling times, a man of action will always find employment.” The meaning here is simple and self-explanatory; A mercenary solider offers his work and his weapons to the highest bidder.

The curious thing though, is that most people claiming Ivanhoe as the first use of the term, merely cited the Wikipedia entry for the word freelance. Although Wikipedia is a shining example of crowd sourcing and coworking, and is generally a reliable source for questions of this sort, something didn’t feel right. I felt the nagging tug of unanswered questions so I pulled out my digital shovel and got to work.

Over at Google Books you can use their Ngram viewer to search the massive database of books they have compiled. The Library Project by Google was created to let anybody search through old, rare and out-of-print books while protecting the rights of publishers and authors. It is essentially a virtual card catalog, but the coolest part of the whole project is the Ngram viewer. It can compare and chart the use and frequency of relevant words over hundreds of years, in relation to the books in the database.

I poured myself a coffee, settled down at my desk and entered the wordsfree lance, free-lance, and freelance. A chart appeared, spanning the last five hundred years, on which were three undulating lines representing the different spellings of the word freelance as it evolved through time. Interestingly, the oldest reference to the word in Google Books is in 1716, but while words and phrases are searchable, due to some copyright restrictions not all the books are viewable. But there is at least one book in the database that precedesIvanhoe. The Life and Times of Hugh Miller by Thomas N. Brown was written in 1809 and provides an even earlier reference to a “free lance.” Like Sir Walter Scott, Brown also used the term in reference to a mercenary solider: “But when the battle was hottest, Hugh Miller was a loyal combatant, not a free lance.”

Now, does it matter who used the term first if it seems that the meaning was the same in both cases? I can’t fully answer that, but I mention it to illustrate the research tools available for freelancers today and the inherent serendipity of the research itself. First, the origin of the wordfreelance is clearly due to a visual connection with the tools of the mercenary soldiers of the time and their unfettered ability to sell their work to separate buyers.

Although the idea of a mercenary was not new in the 18th century, the idea of describing them by their available tools was, and as books became more common and cheaper to produce, the clever and descriptive term free lance was thrust into the collective conversation. Enter any popular coworking space or coffee shop today and you will see the tools by which we identify the modern freelancers: internet access, software heavy laptops and data filled smartphones.

▶ Next page: Getting to the root of happiness