The members of coworking spaces 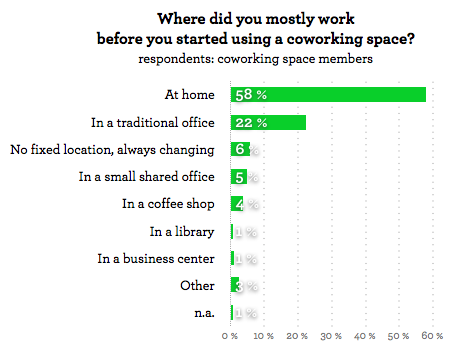 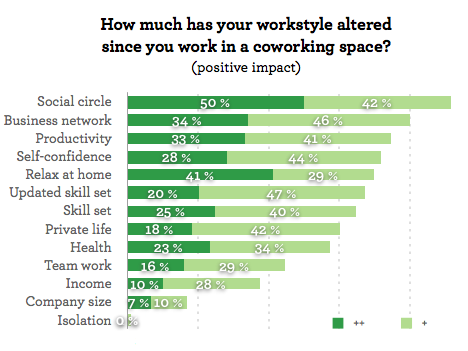 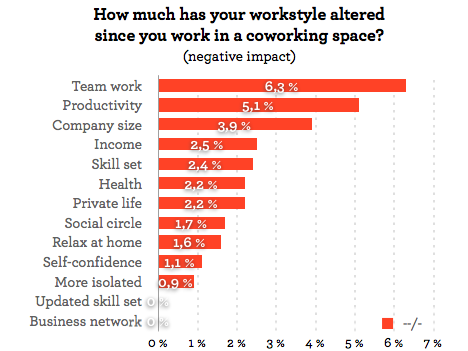 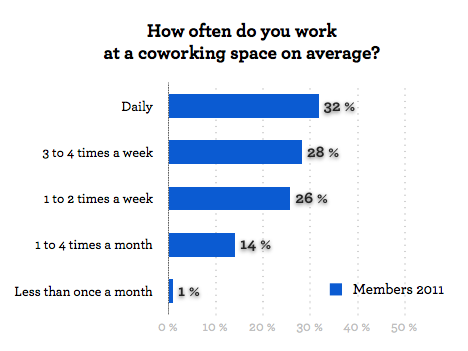 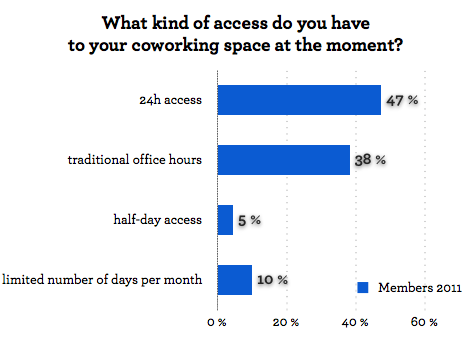 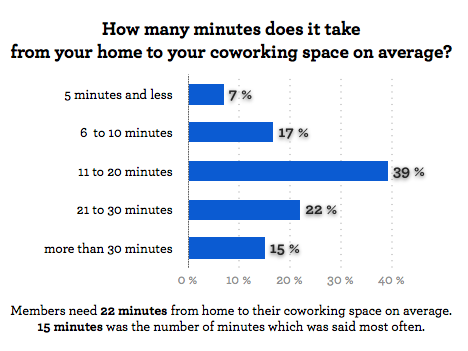 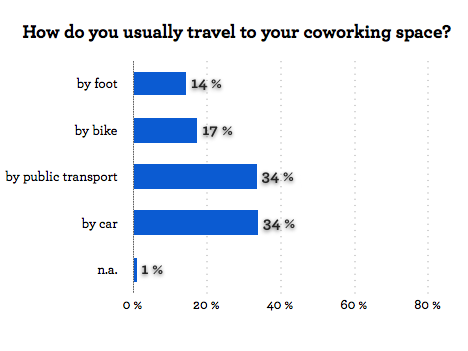 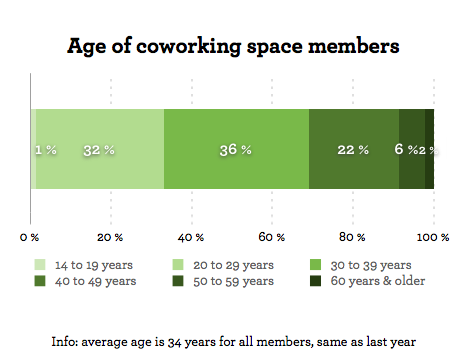 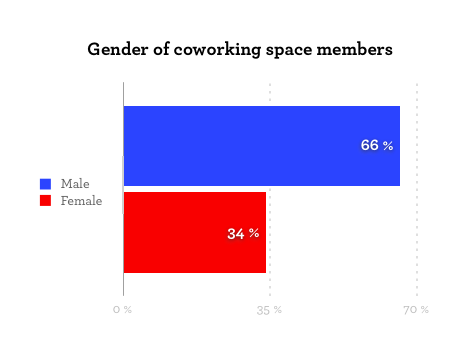 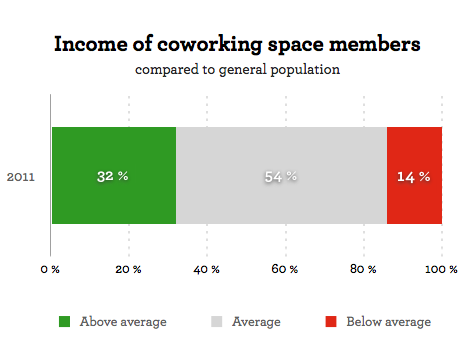 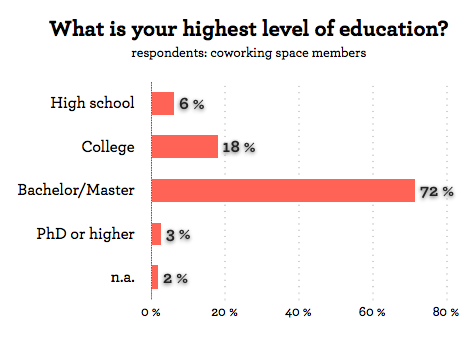 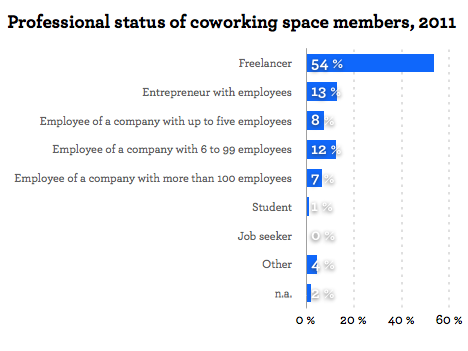 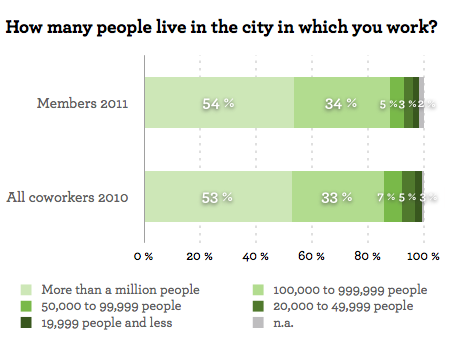 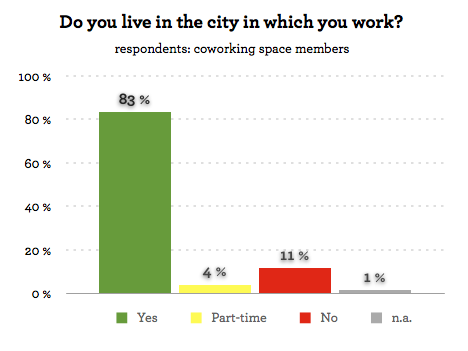 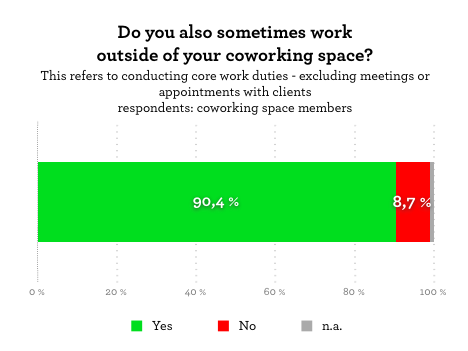 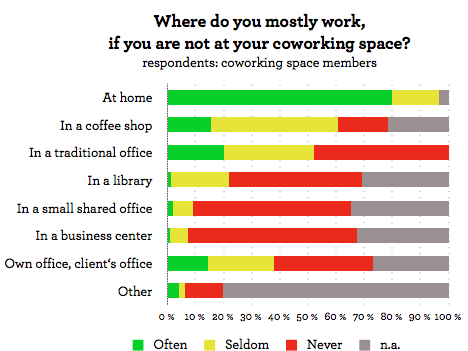 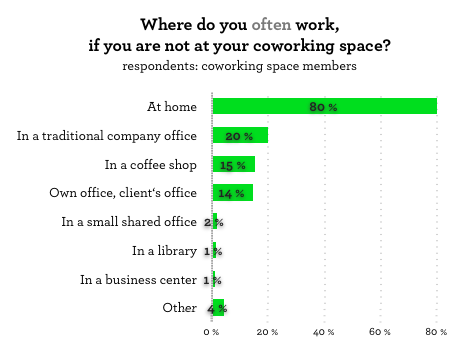 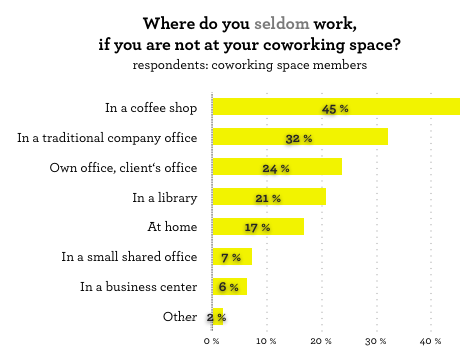 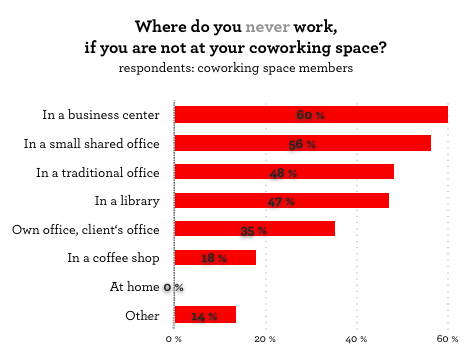 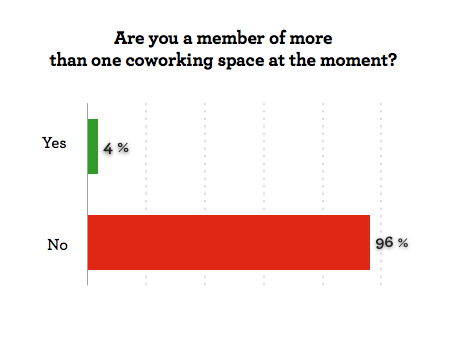 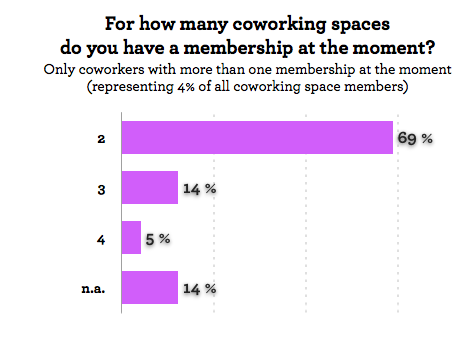 There are two myths about coworking that seem to stick around. Before members joined a coworking space, they often worked in coffee shops. And because business centers offer flexible desks, they are a threat to coworking spaces. One of these myths is conditionally true, the other is a dud. That’s what we can draw out of the latest batch of statistics from the Second Global Coworking Survey. Today we present the results from ordinary members of coworking spaces.
By Carsten Foertsch - Wednesday, 01 February 2012

Where did people work most often before they discovered coworking? In traditional offices, cafes, libraries? None of the above, the survey results show. Just over half of all coworkers (58%) transitioned from working at home. One in four (22%) were regular office workers, and only 4% are reformed café workers. The biggest competition to coworking spaces is the home office, not the WiFi coffee shop – and not even other coworking spaces.

Looking for updated statistics? Study the 2017 results of the member demographics.

90% sometimes work outside their coworking spaces

Nine out of ten coworkers still conduct some of their work in other locations. And not just for meetings, but for core work. Here again, the home office is the most frequent second choice for coworking space members (80%). Less popular are traditional offices (20%) and cafes (14%).

Yet almost every second coworker reports they use both coworking spaces and WiFi cafes. They are still seen as useful places to drop in occassionally, but not regularly.

Coworking space operators sometimes get worried when business centers open a space nearby - some of which claim to offer "coworking", often as part of a bigger chain. There’s also a lot of concern about the attempts by Regus to capture the market by using this term. But the Global Coworking Survey shows they’re not a threat at all.

How often do coworkers come to work? Sixty percent of all survey respondents drop in to their spaces at least three to four times a week. A third work every day. The majority (47%) have 24-hour access, while just over a third utilize traditional office hours. Only one out of ten members pay by the day or the week – the majority are on monthly plans.

Despite working so regularly, two out of three members use flexible desks that they vacate at the end of each day. A quarter have permanent desks that only they can occupy.

22 minutes from home to (co)work

Coworkers seem to prefer working closer to their homes. Nearly two-thirds of the members commute 20 minutes or less to get to their space, and one in four take just ten minutes.

They make these quick journeys using public transport (34%) or car (34%). Many ride bicycles (17%) or just walk (14%). The selection of transport differs widely from country to country, and town to town. The densely populated cities of Europe, with their established public transport infrastructure, are different from the suburbs of most US cities, where it is impossible to get around without a car.

Fifty-four percent of all coworkers live in cities with more than one million inhabitants. Although more and more coworking spaces are opening up in rural areas, the growth of urban coworking will still exceed this. In the million-plus cities, there are not only more coworking spaces per city, but also more members per space.

Coworkers got younger and older...

The average coworker is still 34 years old, and two thirds of them are men – a finding that matches with the First Global Coworking Survey. However, one year later, we find that spaces are attracting more younger and older people. Every twelfth coworker today is over fifty.

...and are well-educated high earners

Three out of four coworking space members have a university degree as their minimum qualification. This level of education is extremely high compared to the average population in the surveyed countries. Perhaps this explains their high income. A third of all coworkers report earning above-average wages, when compared to their country’s average income level. 38% of respondents suggested that working in a coworking space directly improved their income – only 2.5% believed their income had decreased since joining.

However, not all coworkers benefit equally from joining a space. It depends a lot on their professional field. Programmers, for instance, often end up in the very top income group. Yet 14% of all members take home an income that is below average.

Two out of three members never worked in another coworking space before they joined their present location, the survey results show. Only one in eight respondents had been a member of two spaces, and about the same percentage tested out three or more of them. On average, coworkers have tried out 1.5 coworking spaces.

There are even coworkers who have multiple memberships for multiple spaces simultaneously. They switch depending on their mood or city. However, only 4% of all members belong to this group. Most often they purchase the membership for another coworking space which is rather surprisingly in the same city (43%), rather than in another (38%).

Any changes from last year?

Since this is the Second Global Coworking Survey, readers might be interested in seeing some comparisons between this year and last. However, it’s not that easy. That’s because we added a very important qualifying question to the start of the second survey – are you a coworker, or a coworking space manager? By doing that, we split the survey into two versions with different questions, and separated regular members from the people who organize coworking spaces. These two groups have sometimes different needs and experiences.

Last year the two groups were clumped together since many operators also work as coworkers in their space. But this year we’ve separated them. This time around, then, we received more detailed and accurate information about ordinary coworkers. However, it means we cannot compare all of these results to last year. We will publish another article soon about the differences between coworkers and managers