The first survey was conducted in Berlin coworking spaces, like here at Studio 70. 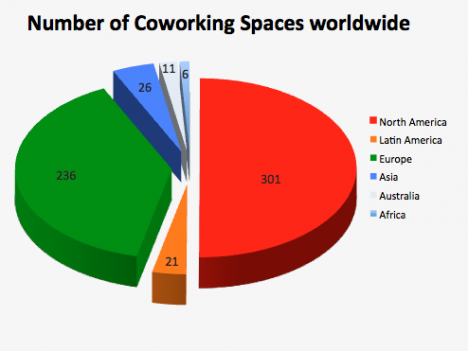 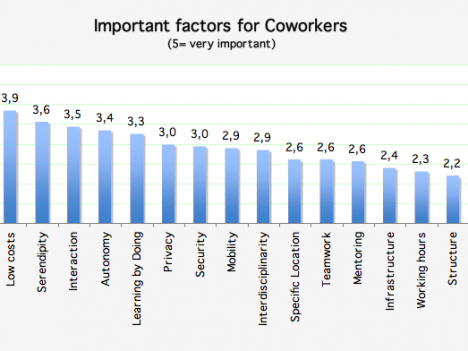 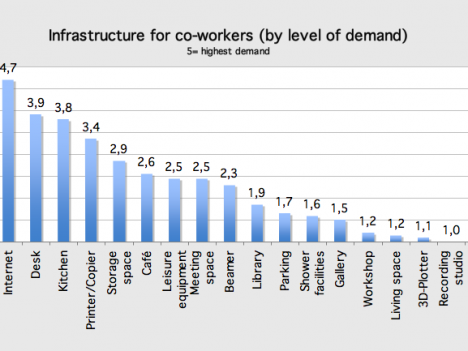 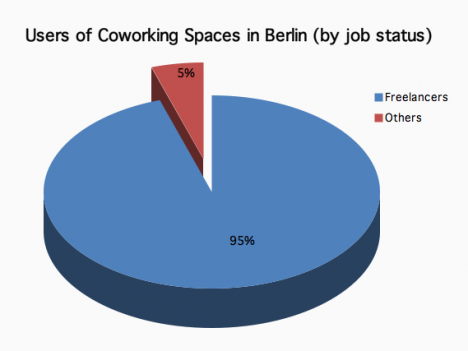 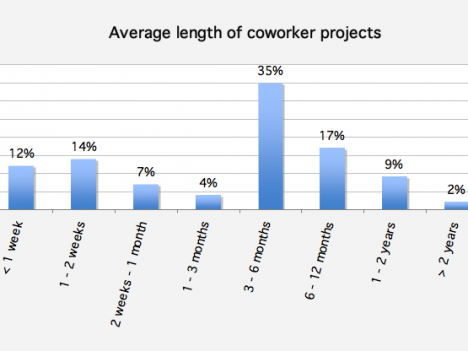 Very few academic studies about coworking and coworkers have ever been carried out. Berlin university student Lukas de Pellegrin set out to change this by conducting research on coworkers, posing three important questions: who are coworkers, what does their workspace look like, and why? He harvested responses from the users of coworking spaces in Berlin, and Deskmag is today publishing the results. The survey is the forerunner of a worldwide study in which readers can participate.
By Carsten Foertsch - Thursday, 14 October 2010

The typical Berlin coworker is self-employed, male and 31 years old, at least on average. In reality almost all coworkers are self-employed – more than 95%. But women make up 40% of coworkers.

The majority of coworkers are between 30 and 40 years old. Very few are older, and slightly less than half are younger, most of them in their mid to late 20s.

Coworking Spaces are centers for programmers and web designers

Coworking spaces in Berlin have established themselves as centers for programmers and web designers, who together make up almost half of all users (42%). Yet those looking for translators or architects will also find plenty in these workspaces.

The working life of a coworker is one of projects. And most projects run for an average of six months. Many also work on shorter contracts – 25% of all projects take less than two weeks.

Loyalty to coworking spaces lasts much longer than a project

Coworkers are very loyal to their coworking space. The overwhelming majority identified very strongly with their space, and have been or plan to be there for around 18 months. When a coworker chooses to leave a coworking space they do so quickly, most of them within three or six months of arriving. Those that have been there a year often remain for much longer.

Coworkers told de Pellegrin that the thing they expect most of coworking spaces was the opportunity to interact with other self-employed people. Many coe for the interesting mixture of different professional fields. They don't want to work at home, and see coworking spaces as a simple solution. One in twelve coworkers are on a temporary stay in Berlin.

The low cost of coworking spaces is the most important deciding factor when selecting a place to work. The second criterion was the possibility for chance discoveries and encounters with people that could have a positive impact on future work. Interacting with other people yet still remaining autonomous was the third-most important factor.

Another important factor is short travel distance. In Berlin, coworkers rarely commute more than four kilometers to their workplace, and the average distance is three kilometers. More than half go by bike, one in three uses public transport, one in five by foot, and only one in ten by car.

Once there, they make most use of a computer and desk, kitchen facilities, printers and filing cabinets. This is followed by leisure facilities and interactive spaces. Restaurants or snack bars nearby are also a big plus. These things are most often used outside of a coworking space.

The results are the basis for a worldwide survey that de Pellegrin will start with in the next few months at the 600  coworking spaces worldwide.

And users can participate directly here at Deskmag. How do you feel about the results? What important questions were overlooked? What do you want to know more about coworkers or coworking spaces?

You can send your questions and comments to Deskmag, or simply tweet on our Twitter page. Your contributions on Twitter will be included in the survey. The results will be published here in a few weeks.