How do Freelancers, Employees and Entrepreneurs cowork?

Freelancers, Employees and Entrepreneurs working under one roof at CSI Toronto (Picture taken and edited by Carsten Foertsch) 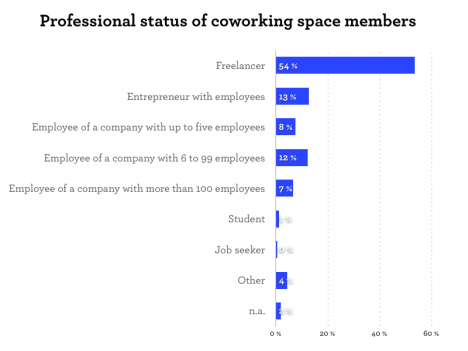 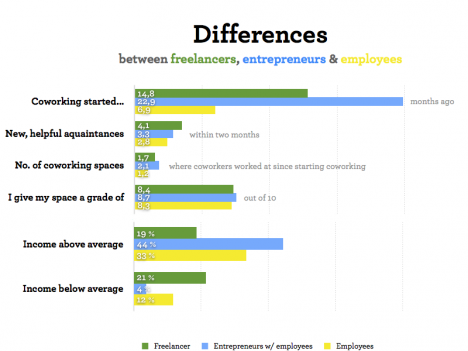 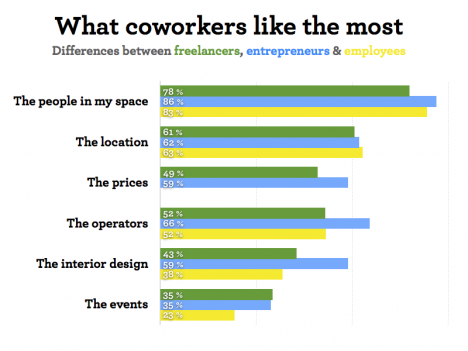 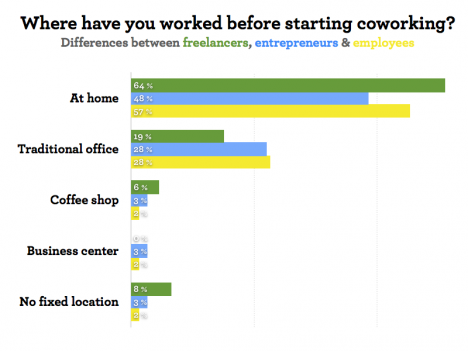 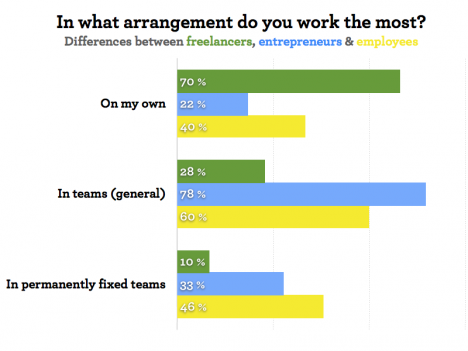 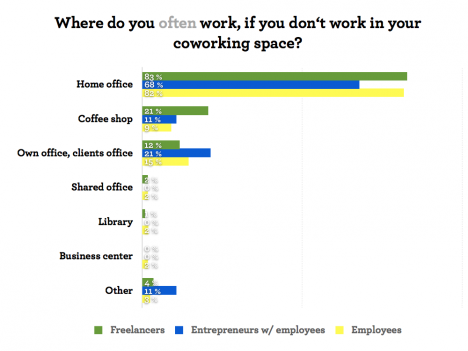 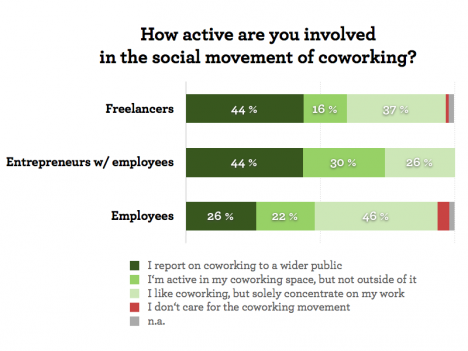 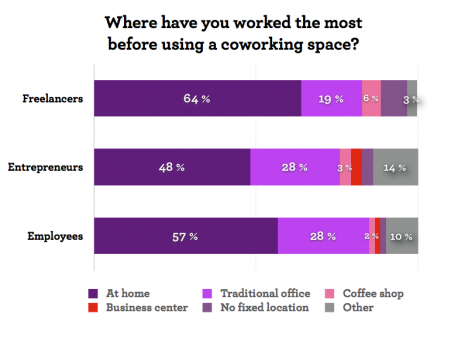 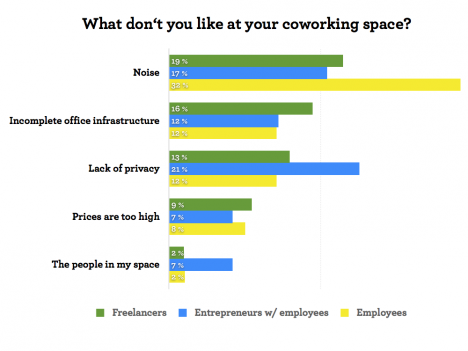 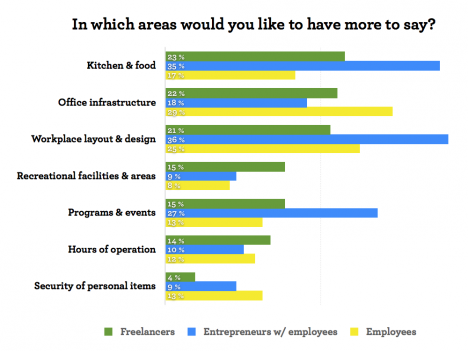 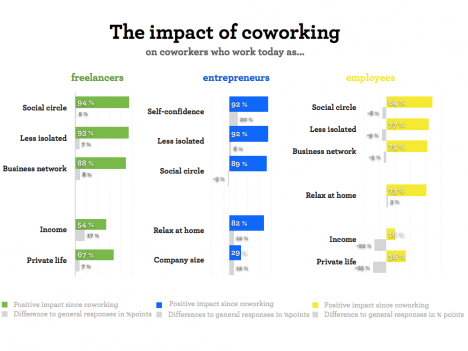 Freelancers continue to dominate the membership base of coworking spaces, but an increasing percentage of the membership classifies itself as employees, numbering around a quarter worldwide and a third in the U.S. Approximately one in nine members are entrepreneurs, running a business with employees. How do these professional statuses influence the opinions and expectations each have of a coworking space? The Second Global Coworking Survey looked at the different needs and outcomes of these three professional groups.
By Carsten Foertsch - Thursday, 19 April 2012

Of all groups, freelancers have the lowest incomes among all members, though benefit the most from working in a collaborative workplace, with more than half (!) reporting a significant increase in income since joining. Probably the get not only better paid, but also wait less often for money when working with other people in coworking spaces. For entrepreneurs (with employees), the proportion is somewhat lower. Only employees experience a negligent change on their salaries by coworking. This established, one in eight employees earn more than the other groups, despite having a fixed monthly salary.

It should be noted that these results are highly simplified since the nature of the work - the industry, the expertise of the individual/company and the type of client - influences income more than professional status. Nonetheless, it does shed light on the strong influence of professional status between the groups.

It also shows how long one is likely to remain in a space. Employees, for instance, are members for an average of only seven months. Further, they spend less time in their coworking spaces compared to freelancers and entrepreneurs, so the benefits of coworking are not (yet) fully realised.

In most coworking spaces, freelancers find that both their social circle and business networks have increased (94% and 88% respectively). They are most often acquainted with new, helpful people (4.1 in two months) and experience the most marked increase in productivity.

For the purpose of this survey, members of coworking spaces that employ additional staff are considered entrepreneurs, of which 92% feel more self-confident since joining a coworking facility. The same percentage enjoy the interrupted isolation. This group benefits the most from more relaxed evenings at home and the ability to keep their knowledge up to date.

One in three entrepreneurs will expand their payroll, in which case they will then belong to the "business with other employees" category. Whether more staff are hired or not, though, entrepreneurs often collaborate with freelancers.

For employees, coworking spaces can present many benefits. Social networks are expanded, isolation is reduced and productivity increased - if not quite as markedly as the other two groups. There was no aspect for which employees experience mostly negative changes. On the contrary, negative features were evaluated - as with the other professional groups - in the low single-digit range.

Each of the three groups surveyed have different expectations for their workspace. Somewhat surprisingly, employees most often appreciate being a member of a community. Given that a relatively large number previously worked in traditional offices, basic office equipment is one of the most important features, coming in at third after community and interaction. The survey also revealed that, for them, a fixed table is not necessarily desirable. Volume, on the other hand, is an issue - with almost one in three bothered by the noise levels of the new workplace. Contrary to the other groups, the majority are satisfied with access during traditional working hours.

Entrepreneurs find the potential for interdisciplinary work more important than the other groups, and are willing to pay slightly more for a desk. For them, it is important to have some influence over the workplace layout and interior design, since the coworking space is a reflection of their business to clients.

Four out of five entrepreneurs work in fixed or flexible working teams (more than any other group) and therefore prefer a fixed desk, more than the other professional groups. An entrepreneur’s optimal workspace layout is somewhat paradoxical: on one hand, they seek privacy and a space that enables closed teamwork; on the other, it should be open enough to encourage interaction with others. To fulfill this conflicting need, events hosted by their coworking space are appreciated.

Interaction is the common denominator between each of the groups, and one of the major features of a coworking space. Given the opportunity, if those surveyed could change something in their coworking spaces, they would presumably start with a kitchen upgrade.

Solutions for a quieter workspace are also among the first points on the list of things to change. Across the data though, a coworking space’s positive features outweigh the negatives: employees, freelancers and entrepreneurs alike very much like their coworking facility.

Freelancers are the most loyal members

What does the future behold? For each of the groups, the majority had no intention of leave their coworking space, with freelancers being the most loyal members. For entrepreneurs, the number just pushed half.

The expansion of companies beyond a certain size renders a coworking space unsuitable. Whether companies remain in their coworking space depends largely on the amenities offered; most notably, private and larger rooms.

Entrepreneurs are the longest serving members, but think about changing their workplace most often

For the coworking space operator, however, it is presumable that the opposite applies: an increasingly larger company could unbalance the relationships among members of the space. A spontaneous exit of a ‘large’ company could leave a gap in the budget, which is usually calculated on a monthly basis. Sudden multiple-desk vacancies could be difficult to fill within short notice, resulting in revenue losses and a decrease in services offered, at the expense of the remaining members.

Entrepreneurs are among the most active members in a coworking space, reporting to the public most often about their workplace – and so in turn are most likely to attract new members.

Employees tend to be quieter about coworking, with a cumulative half involved either externally (25%) or within their coworking space (24%). The remaining half likes coworking, but simply prefers to concentrate on their work. Because employees work primarily in fixed teams (46%), have the fewest "new, useful” acquaintances and participate rarely in events, integration measures that are oriented towards their particular needs could help ameliorate their coworking experience.