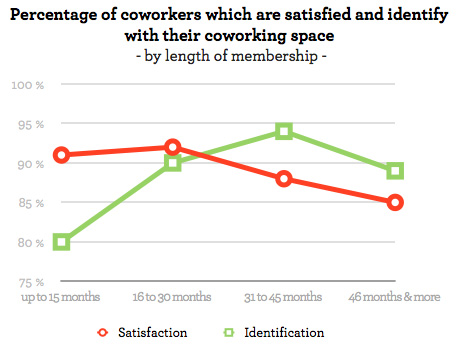 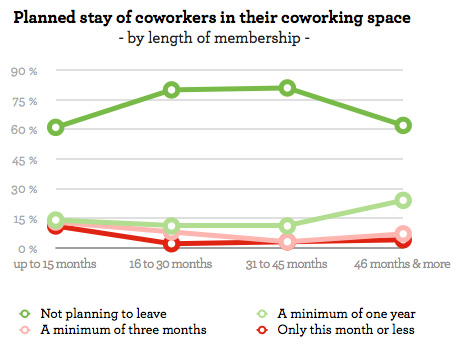 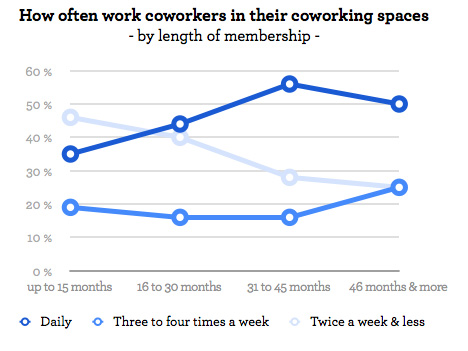 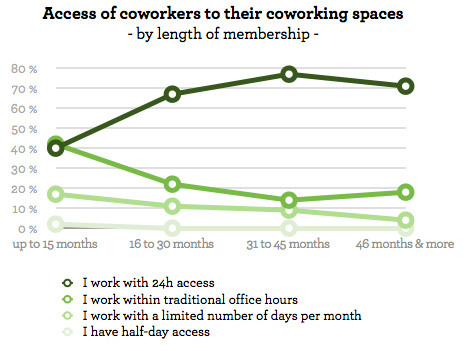 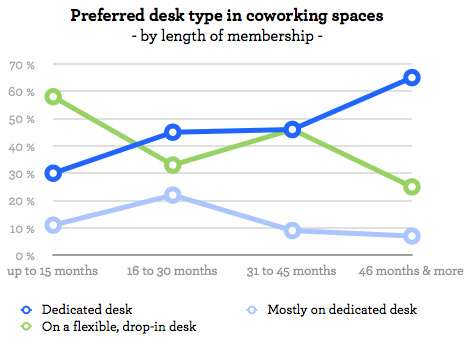 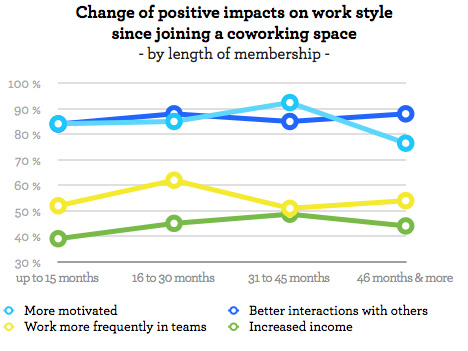 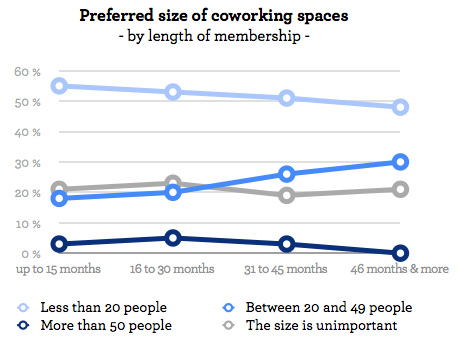 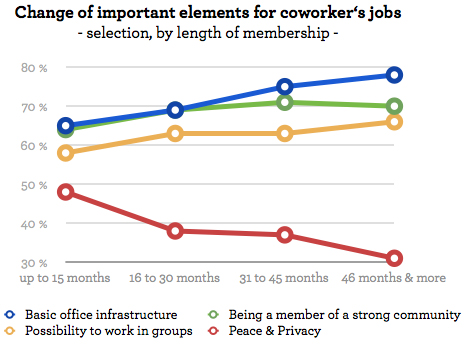 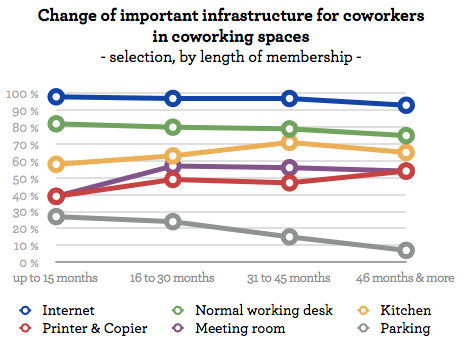 After four years in a coworking space, members begin to lose their satisfaction and attachment. They come in to the office less often and make plans to leave altogether. The Global Coworker Survey shows that the needs and attitudes of coworkers change the longer they stay in their workspace. They switch from flexible to permanent desks, from office hours to 24/7 plans, and desire better infastructure. What can coworking spaces do to retain members?
By Carsten Foertsch - Wednesday, 23 March 2011

The Global Coworker Survey compared the reactions of new coworkers to those who have been in their workplaces for several years. In doing this, Deskmag was able to observe the changing attitudes of coworkers over time.

The positive effects of coworking are not appreciated by most coworkers on their first day at their workspace. It takes at least three months for the coworker to report a high level satisfaction. After this, satisfaction levels increase, until the second year when they begin to fall as the initial enjoyment fades and the once-unique advantages become routine. But even after four years or more, 85% of coworkers still report being satisfied with their workspace, even if this has decreased from a peak of almost 95% during their second year.

Their attitudes on other issues show a similar pattern. The extent to which a coworker identifies with their workspace increases until between the third and fourth year, and then declines slightly. From this point coworkers also begin to report a desire to leave their workspace within a year. They also are also less likely to come in every day to make use of their desk. Motivation decreases, as does income (after three years of compounded gains).

All responses trend consistently downward after the coworkers’ fourth year. What conclusions should coworking spaces draw from this? Despite their best efforts to retain them, long-term coworkers are likely to drift away. Perhaps this is because their businesses expand, and they require more space. Their start-ups are acquired by larger companies, and must often move to a new office. Or they find jobs within companies. As Deskmag has previously suggested, coworking spaces should consider creating an alumni program to keep departed members in their community.

The survey also revealed the changing needs of coworkers until their fourth year. Over time, many desire larger work areas with more members. Interestingly, the desire for privacy decreases over time, while the need to belong to a strong community increases. This shows that people who arrive at a coworking space with initial inhibitions lose them over time. Also striking is the desire for better office infrastructure, particularly meeting rooms and printers and copiers. One way of retaining members, perhaps, is to continually improve the office equipment.

During the first 15 months, less than a third of coworkers rent permanent desks. However their desire for a permanent workstation increases dramatically over time: after 46 months, two-thirds of coworkers use a permanent desk. The largest increase occurs in the third and fourth year, just as identification and satisfaction peak.

Yet the increasing number of permament desk renters presents a problem for coworking space operators, who must provide a combination of flexible and permanent desks for their diverse member base. If after several years more of their flexible members become permanent, less space will be available for newcomers and drop-ins. A balance between the two must be found – 50/50 has been suggested as an healthy arrangement (However, there are also a lot of successful coworking spaces which have only permanent desks).